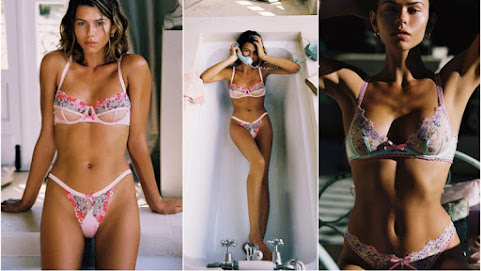 Right now hottie Georgia is on our mind for this #TBT as Victoria's Secret shares a bit of retro-glam with fans and inspires this peek at pop culture, community news and top headlines.

COVID-19 in Kansas City: These major stories defined the pandemic in the metro

KANSAS CITY, Mo. - A year has passed since the Big 12 Basketball tournament was canceled, marking the first major effect of the long-lasting coronavirus pandemic on the Kansas City metro. March 11 shocked the KC area and beyond as sports began shutting down.

OLATHE, Kan. - For the second year in a row, Johnson County's Old Settlers Days will not be taking place. The Johnson County Old Settlers Association announced Wednesday that it came to the decision because of construction being done in the downtown Olathe area. "After looking over the plan for the demolition of the old [...]

Georgia Fowler is no stranger to fronting campaigns for fashion labels around the world. And on Wednesday, the 28-year-old was excited to spot herself in several advertisements in the Sydney suburb of Bondi. She shared several photos of herself plastered on the side of buses and at bus stops for fashion brands Cotton On and swimwear label Seafolly.

President Biden on Thursday signed into law the sweeping $1.9 trillion coronavirus relief package that Democrats muscled through Congress without any Republican support, securing the first big legislative win of his presidency. "This historic legislation is about rebuilding the backbone of this country and giving the people of this nation, working people, the middle-class folks, people who built the country a fighting chance," Biden said.


Trial Of The Century Starts

A year on, WHO still struggling to manage pandemic response

GENEVA (AP) - When the World Health Organization declared the coronavirus a pandemic one year ago Thursday, it did so only after weeks of resisting the term and maintaining that the highly infectious virus could still be stopped. A year later, the U.N.


Future King Offers Clap Back Against Allegations Of Racism

Prince William responded to accusations of racism made during his brother Prince Harry and Meghan Markle's tell-all interview with Oprah Winfrey. The Duke of Cambridge defended the monarchy saying that they are "very much not a racist family." In comments made during a visit to an east London school, William directly addressed the explosive interview broadcast Sunday in the U.S.

The new COVID-19 relief bill is expected to bring tens of millions of dollars to Kansas City. "$195 million in Kansas City will be a game changer," said Kansas City Mayor Quinton Lucas.

Kansas Department of Labor to undergo major server upgrade this weekend; here's what to expect

TOPEKA, Kan. - The Kansas Department of Labor is upgrading its server this coming weekend to prepare for a major onboard in their contact center. "Doing the server migration this weekend makes sure that as we roll those new resources on in the coming weeks, our system can support that level of service that we're [...]

Expect a cold front to change things this evening as blustery south winds turn to the north before relaxing to less than 10 MPH through the night. Along the front showers and thunderstorms will line up offering lightning flashes and thunder for the first time this season.

Billboard #1 in 2001 - Crazy Town - Butterfly is the song of the day and this is the OPEN THREAD for right now.

It should be easy enough to determine whether female troops are just as good as male troops. Form all-female companies and let them compete first in training exercises and then on the battlefield with all-male companies and also with mixed gender companies. That will give us a better idea whether woke wins wars.

^^^ You sound like an arrogant ignoramus. A woman can pilot a drone just as well as a man.

Now even ABC News is talking about how Biden's caregivers keep protecting him from real contact with media. President Houseplant can still sign executive orders tho!

The U.S. military no longer has leaders. It has diversity enforcement officers. We will get our asses kicked if we ever fight a real war again. Tucker has the honesty to say so.

That Marlel bitch destroys everything she touches.

2:51, that may be true. And a woman can operate a word processor as well as a man, or cook chow. But what about combat? That's what the article was about.

When the drones are all shot down and the fighting becomes hand to hand, the women will all claim pregnancy to keep from being deployed.

My experience (30 years USMC, retired mgysgt) tells me that most women don't want to serve in combat roles. Some do. And it's been my experience that moat women (and a few men) cannot pass the minimum male standard for the PFT or CFT.

Everyone is racist if the left doesn't get 100 percent support in their deviant sexual practices and lifestyles. just agree and they will promote you.