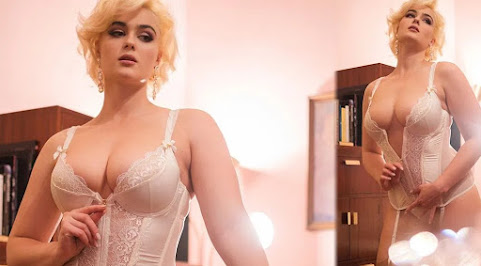 The classic good looks of hottie Stef and her advocacy for body positivity have recently spiked her online following and tonight she inspires this peek at pop culture, community news and top headlines.

KANSAS CITY, Mo. - News of large vaccine clinics coming to Kansas City is welcome to many who say the rollout's been flawed. FOX4 has heard from many of you who have struggled to find open appointments. Truman Medical Center/University Health is one place that's really been cranking through a lot of people to get the COVID-19 shot, [...]

The K reopens: Royals to allow fans back in for 2021 season

The Kansas City Royals announced Thursday that for the first time in 18 months fans will once again be welcomed back into Kauffman Stadium.

Anthony Sherman announced his retirement from the NFL on Twitter early Thursday evening. The 32-year-old fullback spent eight years with the Kansas City Chiefs as part of a 10-year NFL career. From the look and feel of the video, "The Sausage" appears to be turning in his football cleats for law enforcement.


Small Army Loves Curvy Hottie From Down Under

Her size 12 to 14 figure is a departure from the waif-thin bombshells that were once the industry standard, and she's amassed a 990,000 strong following online because of it. Body positive , candid about her sexuality and a generally delightful person, Ferrario is a sign that society's view of the female body is starting to change, and it's about damn time.

'Not fair!': Man who put feet on Pelosi's desk has outburst at court hearing for Capitol riot

The man who was seen putting his feet up on House Speaker Nancy Pelosi's desk during the Jan. 6 Capitol riot had an outburst in federal court Thursday over his continued detainment. Richard Barnett, reportedly screamed at Judge Christopher R.

WASHINGTON (Reuters) - Former President Donald Trump intensified his war with the Republican establishment on Thursday by attacking Karl Rove, a longtime Republican strategist who criticized Trump's first speech since leaving office for being long on grievances but short on vision.

Alec released a 10-minute Instagram video on Thursday detailing why he is quitting the site again, blaming the 'a**holes' on the platform' had posted a link to a story about the reaction to Anderson's American accent, writing: 'Switching accents ?

OVERLAND PARK, Kan. - The Johnson County Home and Garden Show opens at 10 a.m. Friday. It's likely to be one of the metro's biggest indoor events since the start of the pandemic. For Marketplace Events, a company that's cancelled 70 events throughout North America in the past year, it is their first show since [...]

Tamara poses with her freshly demoed masterpiece. // Photo by Bek Shackelford Tamara Day of HGTV's Bargain Mansions, and owner of Growing Days Design, has had a sledgehammer in her hands a time or two. Usually, her sledgehammer-welding days are spent in homes which she buys and renovates, but this morning, Day took on a different type of project.

Hide Transcript Show Transcript HEADING TO THE NORTHEAST TOMORROW DOG WALKING FORECASTS. HOW'S THAT LOOKING PRETTY GOOD THIS EVENING AS TEMPERATURES CONTINUE TO DROP. WE'LL SEE MORE CLOUDS ROLLING THROUGH AFTER ABOUT EIGHT O CLOCK OR SO, BUT STILL NO RAINFALL, BUT HEADING INTO TOMORROW, I DON'T THINK I CAN SAY THAT SAME CLAIM FOR SOME OF US LOW TEMPS BY TOMORROW MORNING 35.

If you trespass with armed mob into a secure government building, screaming your going to kill lawmakers, well your lucky you were not shot. This desk sitting dude is getting what he deserves. He is a loser. Now the world knows it. Trump didnt pardon him. MAGA isnt giving him legal defense funds, he is just screwed! Serves him right. Trump is NOT President tonight, as Q-anon is a teenaged boys mad up internet rant. Its all fake!

An autographed Tom Brady rookie card sold for $1.32 million on Thursday, shattering the previous record for the highest known price ever fetched for a football card. And just like last month's Super Bowl, Brady got the best of Patrick Mahomes.

A signed Mahomes rookie sold at auction last month for $861,000, briefly holding the record that Brady's card broke Thursday by $459,000.

@11:53
Guess how many guns were confiscated from those arrested at the Capitol protest? Zero, nil, nada. Keep drinking the lib kool aid sap.

Peasant had the audacity of desecrating Nancy Pelosi's office with an American flag and putting his spotless boots up on her desk.

Thus, he must be incarcerated.

Meanwhile ANTIFA and BLM rioters who burned, looted, vandalized, and murdered are allowed to run free and gearing up for another summer of destruction.

Biden will unleash his thugs soon to distract Americans from their angst about their taxes, utility, groceries and gas prices going up and the economy tanking.

"Just ignore all that looting, burning, assaulting and killing over the summer and into the fall." -- Every Libtard Everywhere

8:24: +1 million! Did you see the Republican argument in front of the Supreme Court? It's a riot! They want to limit access because "this is a zero-sum game." They're not even hiding their cynicism!