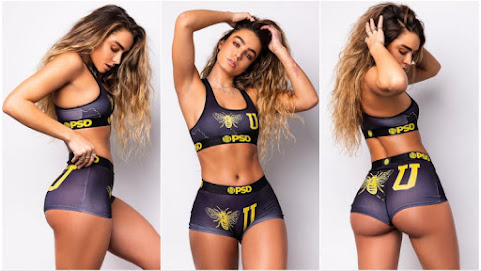 This early morning we're inspired by Sommer and her fashion hotness as it relates to pop culture, community news and top headlines.

Kansas City Ready To Get Railroaded Yet Again

The management team at Canadian Pacific announced the acquisition of Kansas City Southern in a cash-and-stock transaction.

KANSAS CITY, Kan. - Boulevard Drive-In Theatre in Kansas City, Kansas will be opening for its 71st season on April 2 and April 3. The company said it will be showing first run movies this year and will still be at half capacity with social distancing.

KANSAS CITY, Kan. - Kansas moved into a new vaccination phase Monday, but some say they're still left behind when they try to make an appointment with several pharmacies. Gary Saint from Wyndotte County said he's one of them. "It just seems like they aren't updating anything," he said.


Hotties Have It All

"Thanksiesssss soooo much to @infamousmotorgroup for wrapping my ceeerrr🥺🙏🏼✨💛 i'm obsessed 😬🍃," Sommer captioned the hotshots! In the sexy snaps, Sommer included on a shot with her signature smile with tongue out -- and several others showing off her backside!

"The media, the Twitter blue checks and assorted leftist hacks couldn't help but jump to conclusions" about Monday's mass shooting in Boulder, Colorado, despite the fact that little information about the suspect was available, Fox News host Laura Ingraham said Tuesday.

Border Patrol has released hundreds of migrants without COVID test

DEL RIO, Texas -- US Customs and Border Protection have released around 2,000 illegal immigrants into this tiny border town in west Texas over the last several weeks without at least ensuring they had a COVID-19 test, The Post has learned.

As a former Trump campaign lawyer, Sidney Powell did more than perhaps anyone to push the big lie that President Joe Biden's victory over Donald Trump in last November's presidential election was the result of fraud involving Dominion Voting Systems machines. Now, however, lawyers representing her have acknowledged that the "big lie" is, in fact, just that.

Trump-boosting pillow salesman Mike Lindell took a swing at Fox News this week, complaining that the conservative network-which essentially plays his MyPillow commercials on a loop-isn't giving him a platform to peddle his baseless voting machine conspiracies. Fox might be "in" on a conspiracy against MAGA heads, Lindell ultimately suggested.

Little Pantry in Waldo full of big blessings for community

KANSAS CITY, Mo. - Whether it's rainy, snowy or resident are struggling through a global pandemic, Kansas City, Missouri's Waldo community consistently makes sure it takes care of its neighbors. That effort has manifested through The Little Pantry.

Among the many exhibitions upended by the pandemic, a stellar show of recently conserved objects in the collection of The Nelson-Atkins Museum of Art was put on hold when the museum closed in March 2020.

Hide Transcript Show Transcript SO YOU'LL KNOW FIRST, THIS IS FIRST ALERT WEATHER. THAT OPENING DAY FORECAST, BY THE WAY, WILL BE ON OUR NINE-DAY FORECAST WHICH I'LL SHOW THAT YOU IN ABOUT 2:30. RIGHT NOW, THINGS ARE RELATIVELY QUIET IN THE METRO. WE HAVE LOTS OF CLOUDS OVERHEAD.

Zella Day - Holocene is the song of the day and this is the OPEN THREAD for right now.