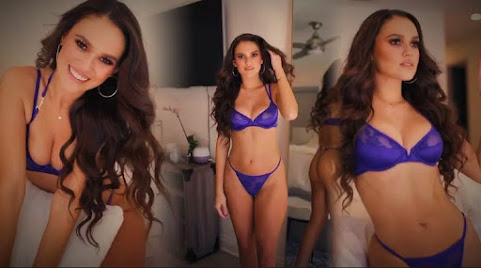 There's a lot to consider this evening as we're inspired by Maddy's casual promo hotness whilst we check pop culture, community news and top headlines.

KANSAS CITY, Mo. - It's no shock utility payments are a concern after the recent cold weather and the power companies are warning people they're hearing about more scams. Utility companies, like Evergy and Kansas City, Kansas Board of Public Utilities, said scammers are calling customers posing as legitimate utility companies.

KC business reflects on 12 months in a pandemic

Like many people in March 2020, the owners at downtown Kansas City printing company MPress thought the worst of the COVID-19 pandemic would be over in a few weeks or months."When it started we really did not know the magnitude," said Ralph Myers, who started MPress with his wife and son 20 years ago.

In response to all of her Instagram posts, many of Madison's followers love to mention her first major movie role in The Game Plan, which saw her starring alongside Dwayne "The Rock" Johnson. She was a child star on the rise at the time, but she would eventually put her family-friendly past behind her by appearing in the raunchy comedy American Pie Presents: Girls' Rules.

Cuomo Accused of Unwanted Advance at a Wedding: 'Can I Kiss You?'

A slew of Democrats on Capitol Hill - including progressives Sen. Elizabeth Warren, D-Mass., and Sen. Bernie Sanders, I-Vt. - on Wednesday proposed a 3% total annual tax on wealth exceeding $1 billion. They also called for a lesser, 2% annual wealth tax on the net worth of households and trusts ranging from $50 million to $1 billion.

"It is a more durable solution if it's 60 votes," Coons said on Monday after a couple of "very preliminary" weekend discussions with Republicans on raising the wage. Republicans "realize it's got to be raised," said Sen. Angus King (I-Maine). "There are three principle pieces: The number, the phase-in and the tipped wage.

An Amazon employee filed a lawsuit Monday accusing the tech giant of deliberately paying her and other Black employees less than their White counterparts, becoming the latest on a growing list of current and former Amazon workers to accuse the company of systemic racism.

After being snatched in an armed robbery last Wednesday, Lady Gaga's stolen French Bulldogs, Koji and Gustav, were returned unharmed to Los Angeles police. Her dog walker, Ryan Fischer, however, remains hospitalized, having been shot in the chest while two suspects allegedly took the singer's pets.

We're running a limited series of articles here at The Pitch called "One Year Out." A few of us spoke to the last bands that we saw play live... on the one-year anniversary of that concert. Your friendly neighborhood editor Brock Wilbur saw Murder By Death in Lawrence.

OVERLAND PARK, KS (KCTV) -- An Overland Park police officer is retiring after 34 years on the force, and his final call was an emotional one. "I'm going 10-7 for the last time in 34 years. I love you guys. Be safe," Officer Andy Black said. "581.

Tuesday will be sunny, high near 59 degrees

Hide Transcript Show Transcript BAD AT ALL GOOD FOR A WHILE NEXT FEW HOURS. JUST NEED THAT JACKET, ESPECIALLY AFTER THE SUN GOES DOWN SEVEN O'CLOCK TEMPERATURE 44 BY 9 WILL BE AT 37 WITH CLEAR SKIES LOW TEMPERATURES THOUGH. WILL STILL BOTTOM OUT BELOW FREEZING. THAT'S ALWAYS BEEN FOR QUITE SOME TIME.