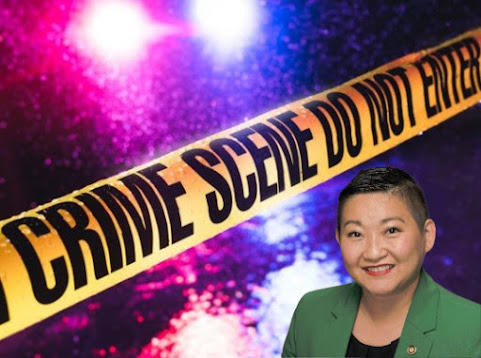 Don't get it twisted, for the most part we ABSOLUTELY AGREE with Rep. Weber calling out a Republican politico doing bad stand up on the job and ranting about international politics whilst using the lame "China virus" tag.  The vast majority of Missouri GOP denizens need to stop playing mini-Trump and focus on fixing garbage Missouri highways or start worrying about the ongoing opioid crisis devastating rural Missouri.

Rising levels of anti-Asian sentiment are, in fact, an American problem that needs to be addressed.

NBC News: (Prez) Biden says hate crimes against Asian Americans are 'un-American' and that they 'must stop'

Dos Mundos: Jorge Ramos - Why Has There Been a Spike of Anti-Asian Hate?

Only those ignorant of history will overlook the Democratic Party's troubled past when it comes to persecution of Asian-Americans.

Last week, about 48 hours after Rep. Weber offered her bold defense of Asian-American dignity, a dude was killed on Kansas City streets and became a recent victim of a 2021 homicide surge that's tragically keeping pace with last year's historic number.

The victim was initially identified as a woman.

Later KCPD offered a correction and noted that it was an Asian male, only 18 years-old who was killed by way of gunfire in a car parked near 116th Terrace and Troost.

Whilst words are powerful and can hurt, we contend that rampant gunfire in KCMO is still more dangerous than politically incorrect rhetoric.

After the murder of the Asian teen there was no followup, comment or acknowledgment from the Kansas City Missouri House Rep regarding a rare murder that killed a member of the local Asian community.

Moreover, neither local nor national media want to address growing threats to Asian people in the urban core where language barriers and rampant poverty pretty much make everyone a target.

Sadly, media coverage of the spike in attacks targeting Asian-Americans is exceptionally convoluted.

For instance, try and translate this quote from renowned author Michael Eric Dyson:

The history of attacks against Asian Americans is complicated. Addressing it will be, too

At least this link is a bit more direct and offers an upbeat spin:

We share these links, quotes and questions merely to note that scoring political points and standing up to nasty rhetoric is important but still so much easier than confronting the ongoing slaughter on Kansas City streets that's quickly crossing demographic lines whilst our elected leadership is engaged in constant culture war and divisive identity politics.

mini-trumpers in terms of bank accounts too. Even if he former president was always lying about his bank account too.

Asking for logical consistency from politicians is a waste of time. just keep waiting for the biden check.

"Violence against Asian Americans and why 'hate crime' should be used carefully — "Dyson said the Black community, like others, hasn't been untouched by the Trump administration's incendiary rhetoric."

What a joke. Blacks are the ones killing Asians and blacks.

Sad but true @ 6:47. it's not racist just forbidden to say. That stats prove it out.

Here is that snake oil salesman, Dr. "I have NEVER been right once" Fauci, telling some talking head with the brains of a Christmas sweater that the virus will come back, because of "Climate Change".

Meanwhile, our Chinese masters have told their bought and paid for slaves in the media and Washington D.C. to stop saying that the virus is from China.

Americans are, for the most part, dumb as a post.

no matter race or creed. most politicians only care about themselves.

China is a NASTY country...torture of political prisoners, forced abortion of females, stealing intellectual property, etc. And they eat dogs.

Oh my...the msm playing cover for dem party, what a shocker. TCK all too willing to join the farce.

Wonder what sycophant came up with this angle to blame trump for the black violence plague affecting everyone.

Blacks target everyone, they try are the anti racists.

Asians are smart, hard working, value education. Of course low lifes will hate them. Actually they are exactly the kind of citizens politicians hate too.

Of course she's not going to say anything . . . the murder happened on Troost. Statistical odds are good that the killer was a Negro

If it had happened in Johnson County - where statistical odds would lean toward the killer being Caucasian - you wouldn't be able to shut her up . . . and she'd probably even get her 15 minutes on MSNBC.

To speak out would incur the wrath of the woke mobs . . . and piss off her constituency.

Why are negroes responsible for 85% of all crime committed in the USA?

Slant eyes wont say a word about the murderous blacks because it doesn’t fit the all whitey bad narrative.

I saved this from a previous post, thought it was relevant:

"... and yet the blacks are racist towards Asians and continue to attack elderly Asians across the nation with impunity. Crickets as to the major perpetrators.

Black issues, conversations and focus
permeate the media 24/7 to point of oversaturation and FATIGUE."

The media is omitting who the majority of attackers are but won't hesitate to infer it's Whites by default. Dalton

So stop calling it out South African variant you bigots.

Literally willing to associate Black people with a virus but not Chinese.

It was the China Virus that created this mess. They made it, they own it.

We don't like the guy pointing out who poisoned the world, so we're going to let the poisoner avoid retribution for it.

Oh, and meanwhile we're going to deprecate ourselves with the unfounded obligation to accept anyone onto our public dole who claims to be oppressed elsewhere.

Another day, another Democrap politician covering up for the burn loot murder crowd.

They ARE a virus that kills at a much higher rate than Covid 19.

If America is such a racist country that Dems and liberal media would have you believe then why do millions of people literally risk their lives trying to here?

Any of you libs have an answer?

The main point is that innocent Asian Americans are being blamed and attacked for shit they had nothing to do with. This is the same sick attitude displayed by blacks towards law enforcement in other cities that had shit to do with George Floyd.

These elderly Americans are vulnerable to the racist blacks who are transferring their fear and hatred against non whites when it pleases them.

Blacks have never liked Asians since the Roof-Top Koreans kicked the rioting Black's asses during the 1992 LA riots.

Provide a Roof-Top Korean an AR-15 and your business will never be burned or looted.

Who voted for this idiot anyway?

It must be unknown to journalists that Asia is a big continent, and is the home of many different cultures. "Anti Asian" could refer to any one of them.

Can anyone tell me where the problem lies? Anyone?

Uh, I think we need to call a spade a spade here.

white people are a pandemic

What about all the violence against Americans that is hate crimes being committed by blacks?

^^^^^ Didn't Nancy have Trump pinatas in her office?

It would have certainly been on the news or some report.

10:48 It would have certainly been on the news or some report.

I remember that kid,some sort of southeast jungle azn ,was killed at his families laundromat on maple hill, never solved. Who done it,Eric Michael Dyson? You hack.

Mike Brown laid in the street while police stood over him and shot him several times for no reason.
Wait, he had his hands up and was shot in the back for no reason.
Wait, he had his hands up shouting don't shoot, while approaching the officer in a friendly manner and was shot several times for no reason.
The Obama Justice Department said different but Mike Brown to this day is revered along side MLK Jr. for his talent to lay in the street, run away and run towards all at the same time with his hands up, then martyr himself for no damn reason.
Blacks Loves Martyrs. Mobs feed on irrational emotion and are motivated to strike out against anyone that goes against narratives that they irretrievably set in stone.

Oh, and they don't give a shit about Asians either

Tony thinks "China virus" is "lame". Why? It's accurate.

Never had a problem with Asian Flu.

IT ABSOLUTELY IS A CHINA VIRUS

People vs Nation, do not want to offend China.

Once more, thanks, Mr. Trump!
Thanks, Republicans!

^^^Right, a bunch of black Republicans are running around beating up East Asians. And now, back to reality.

Blacks can't stand Asians because many of them came here with nothing and they are outperforming blacks across the board in every category except welfare.

Haven't you got five hundred semi-literate words to write that amount to 'Orange Man Real Bad?' What will you do now that Trump is gone? Simple! You'll still moronically blame him for everything.

Hop to it! Your six readers are dying for their hate-fix. Just, grammar check please? Kthx


Heading to the Plaza to eat tonite..hope the hood rats haven't dreamed up another excuse to riot and loot there tonite..

LIBERALS ARE TURNING ON EACH OTHER

HOW COME LIBERALS KILL OLD PEOPLE AND COVER IT UP

Just when you think MoRage can't saying anything dumber than the last comment he made he ups and does so.

MoRage bites the fart bubbles in his bathtub.

LOL! Yeah, it stimulates his package.

someone who tries to bite the fart bubbles in a tub is called a gorp.
I am unclear how that stimulates a package, if that is dangerous for some men, take a bath face down.

go ahead, someone CALL ME A KNOW IT ALL!

I can guess how it went down. Tranny Asian male hooking in the hood. Gets a gang banger client who is NOT looking for a little LGBTQIA hookup. Things go Too Short real quick. I'd place this directly at the feet of the progressive dem party. They've told these mentally damaged individuals that males really are females if they think about it hard enough, and all the world will accept them as they think they are. Nope, not the way it works. They should be offered help not confirmation.

The Asian murdered in KC was a tranny trying sell BJs. Some Johns don't like that ! Not a race thing, but an expectations thing.

Just for fun Google the description of the strains of the flu the 2019, 2018, 2017 etc. flu vaccine protected against. You might be surprised by the names of the flu strains. Until 2020 it was the standard operating procedure to name virus strains after the location where they were first discovered. For example, the 2019 flu vaccine protected against the A/Brisbane H1N1 and the A/Kansas H3NS and the B/Colorado viruses.

I don't think the violence against Asians in this country is being committed by Republican voters. Every clip I've seen looks like another Democrat plantation dweller.