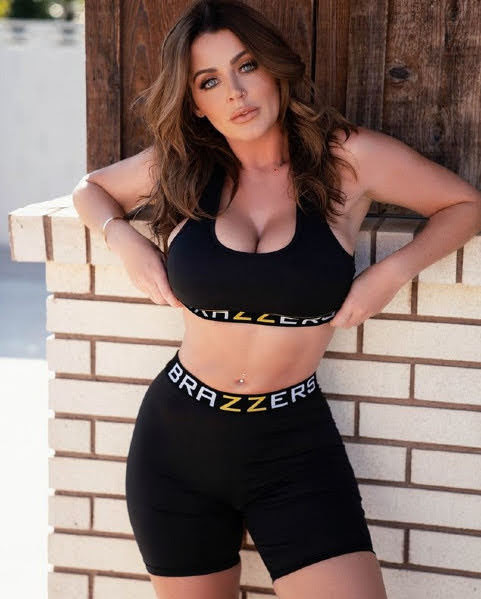 Right now hottie Sophie stands up for her favorite pr0n brand and inspires another peek at pop culture, community news and top headlines.

KANSAS CITY, Mo. - Outdoor dining has been successful for many Kansas City area restaurants and bars, and a potential ordinance could give outdoor tables a more permanent place on the menu. "It's really increased our capacity by a measurable percentage and that has helped us to stay afloat during these tough times," Grant Waner, co-owner of City Barrel said of their outdoor cafe.

As Missouri continues Phase 2 of its vaccination rollout, a partnership is ensuring vulnerable populations have access to the COVID-19 vaccine.

On the final day of Women's History Month, 41 Action News Today Anchor Rae Daniel sat down with a panel of Kansas City area women to discuss everything from equal pay in the workforce, to mental health, to nutrition and wellness.

President Joe Biden will unveil a more than $2 trillion infrastructure package on Wednesday as his administration shifts its focus to bolstering the post-pandemic economy. The plan Biden will outline Wednesday will include roughly $2 trillion in spending over eight years, and would raise the corporate tax rate to 28% to fund it, an administration official told reporters Tuesday night.

Facebook removed a video of an interview with former President Donald Trump conducted by his daughter-in-law Lara Trump, saying any content "in the voice of Donald Trump" would be scrubbed from the social media platform. Facebook permanently banned the former president from their platform in January after the Capitol riot.

Rep. Alexandria Ocasio-Cortez has finally addressed the border crisis - but only to accuse anyone using the term "surge" of pushing a "white supremacist" philosophy. Ocasio-Cortez (D-NY) has repeatedly been accused of ducking the dangerously overcrowded migrant detention centers despite saying they were akin to "concentration camps" under the previous administration.

Covid-19 was the third leading cause of death in the United States last year, after heart disease and cancer, according to provisional data released on Wednesday by the US Centers for Disease Control and Prevention.

KANSAS CITY, Mo. - 41 Action News is offering a daily recap of COVID-19 related stories from across Kansas City and the country. Check back every morning for the latest developments.

Koalas at the Kansas City Zoo: Photos and fun facts before your visit

KANSAS CITY, Mo. - The koalas have arrived, and they will be viewable to Kansas City Zoo patrons beginning in April. However, we got a little sneak preview. Photos sent to FOX4 show the Australian marsupials clinging to their tree environments with their unique-looking hands. Are those two thumbs?

AT THE PLAZA, 37 DEGREES, THIS IS A COLD MORNING, YOU WILL NEED A WARM COAT, NOT MUCH OF A BREEZE THERE, BUT ENOUGH TO MAKE IT FEEL LIKE FREEZING, NORTHWEST WIND AT ABOUT SEVEN. 26, IT IS ON THE THERMOMETER IN LAWRENCE, WHEN HE SEVEN IN ST.

Diplo & Sonny Fodera - Turn Back Time is the song of the day and this is the OPEN THREAD for right now.

Making Our Museum: With Scott Wagner

A teacher's perspective on returning to in-person learning in Kansas City, Kansas

OVERLAND PARK, KS (KCTV) -- No injuries were reported after a fire broke out at duplex in Overland Park. It happened just after 1 a.m. Wednesday in the 8600 block of Riggs Street. First units on the scene reported heavy fire from the back of a two-story duplex.

DE SOTO, Kan. - A train traveling through Johnson County hit a pedestrian this afternoon. Deputies say the victim died from his or her injuries. It happened on the tracks near West 82nd Street and Ottawa Street in De Soto. The location is just south of the Kansas River near Riverfest Park.

INDEPENDENCE, MO (KCTV) -- Independence police are investigating a deadly hit-and-run crash after a driver hit three people walking near Blue Ridge Blvd and Sterling Avenue in Independence. The crash killed one man on March 23. Home video surveillance in the neighborhood could help police track down the driver who left the scene.

KANSAS CITY, KS (KCTV) -- Police caught two people suspected of stealing cars from Tonganoxie and Basehor, each leading police on chases Monday evening. Officers said a citizen driving a pickup truck helped bring one of the pursuits to an end near 24th and Leavenworth Road by blocking the stolen vehicle.

KANSAS CITY, Mo. - More than 70 new potential jurors were examined in St. Charles County Tuesday for the trial of accused double murderer Kylr Yust. Yust is charged with two counts of first-degree murder in the deaths of Kara Kopetsky of Belton and Jessica Runions of Raymore.

KANSAS CITY, Mo. - Kansas City police are investigating after an ATV was taken from a boy with autism. Lincoln and his father, Joe Boyer, are from Michigan, but they came to Kansas to buy an ATV. Monday night, they stayed at a hotel in Kansas City, and when they woke up Tuesday morning, Lincoln's ATV was gone, stolen from the parking garage.

Latest Pets Up For Adoption In The Kansas City Area

Looking to add a new member to your family and give back to the world at the same time? Then you should consider adopting a pet from a local shelter. Amid the ongoing COVID-19 pandemic, animal shelters in and around Kansas City have dogs, cats and other animals ready and waiting for someone to take them home.

When Sally Linville made her first footstools in a K-State furniture studio as graduation neared, she had no idea she was scratching the surface of a full-fledged (and feathered) career - let alone a 25-person operation near West Plaza in Kansas City.

Asia Jones used to find the idea of being an activist intimidating - until she found Shirley's Kitchen Cabinet. She is one of more than 2,000 women on the mailing list for the Kansas City, Missouri, nonprofit, which focuses on amplifying the voices of Black women.

when trump launches his social media site, facebook will be irrelevant.

I remember there was some guy who had a game show on TV.

Are you thinking of Reagan?

And yet another failed attempt to appear relevant by a failed loser who doesn't realize the parade has passed him by. Weird.

So isn't Gaetz the guy who got arrested for a DUI after leaving a Strip Club that was later closed due to underaged Prostitution investigations, claims that he thinks of the 19-year-old son of a former Girlfriend (who is currently only 36 herself) "as his son", but says he is not the kid's Father even though the kid has been living with him since the kid was 12?

And isn't the now 19-year-old who he says he never had any relationship with the same girl photographed with him at several different events during his 2016 Campaign Trips? Who gaveThe girl who gave his FortWalton address as hers when she was busted for DUI in 2017, and who he bailed out?

An influx of children due to neoliberal trade policies and possibly nefarious motives from various groups?

Yet another futile attempt at censorship of a President who still lives in your head 24/7.

Not to mention Bill Clinton! ;)

It would have been more fun if AOC kept moving her eyebrows around instead of her eyeballs.

What's fun is how she moves her hysteria around. When Trump was in office you couldn't get her off the border for her virtue signaling photo ops. Now that President Furniture has created a massive humanitarian crisis she doesn’t want to go near.

Sophie Dee is so hot, I’d eat the peanuts from her shit.

Not even a reply. Thanks tho! Lol

Josef Stalin would have loved the censorship of Facebook.

Mark Zuckerberg is such a nerdy pussy.


Trump remains cancelled because they know there is proof that just came out about the election fraud they have IP addresses times dates and whether or not they broke through the firewall. Joe Biden was right but not right enough when he said they had the best voter fraud scam in place. Too bad Joe you are BUSTED and the whole world knows it. Too bad this country is so corrupt they won't do anything about the fake President Joe Biden.

^^^^And yet another daily dispatch from Planet Tinfoil is dispersed. Weird.

Fun fact: koalas are the only non-primate animal to have human-like fingerprints.


Beijing Bidet to squander 2 TRIILION of taxpayer $$ on Demo scams..

Dr. Chimpy! Thank God! We need that expertise you think you have! Lol

“I’ll never forget this, because it was the moment I saw with my own eyes that the America I love was becoming a nation that steals refugee children from their parents,& caged them.”

She truly is one of the dumbest bitches on earth

“The researchers found in their report that about 3.36 million deaths occurred last year. Covid-19 was reported as the underlying cause or a contributing cause of death for nearly 378,000 -- or about 11.3% -- of those deaths. The data showed that heart disease caused 690,882 deaths and cancer caused 598,932 deaths.“

So nearly 378,000 deaths was the underlying cause of death, not the actual cause, meaning they had covid but it’s not the cause of death. Kinda blows a big ass hole in the whole despicable dimwit plandemic hoax.

Not really. Her maniacal ramblings are kind of funny if you don't take her seriously.

i watched an interview with katie couric. She was asked who her favorite comedians were,dead or alive, and she says oh she really like all the late show hosts like kimmel, colbert and trevor Noah. What? LAME. No mention of Gilda radner and Richard pryor? Ridiculous.

another fun fact about koalas is they give each other some kinda koala venereal diseases like syphillis so likely you see a koala it is kind of gone insane from an STD it contracted from wanton hookups in eucalyptus groves man, just nasty