Today started one of the biggest vaxx events in the American Midwest . . .

Initial estimates stated at least 6,000 people could get vaccinated through this event. Now, Parson said that number could be more like 8,000.

Missouri Governor Mike Parson said the event is focusing on the most vulnerable people in the city.

“Not too long ago, I met with the legislators behind me,” Parson said. “We may differ sometimes in the political arena, but I’ll tell you, getting people here to get the vaccine, trying to help people every day, that’s what it’s all about, being a public servant, and I want to thank all of them for their work, their effort and making these two days possible here in Kansas City.”

Instead, he focused on bus rides to the local poke party . . . 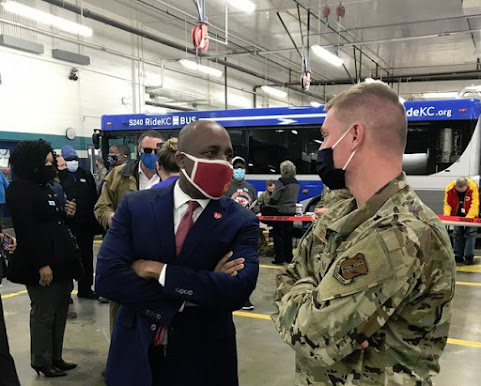 Here's the mayor's attempt to hop on the bandwagon from a distance and a glimpse that he was iced out of the Arrowhead pandemic cure festivities . . .

"Our transit operators have worked hard to keep us going over the past year. Excited to see that we were able to get them vaccinated today. Thank you to the Missouri National Guard for a special vaccination effort at @RideKCTransit and to our transit and union leadership."

And so . . . We're happy that both the Missouri Guv & the KCMO honcho have both given their support to the event.

This is worth considering as leaders fight over scarce resources and dueling culture war legislation.

he shouldn't have been there, he didn't help.

Mayor McDrinkerson is still sleeping it off guys, will you cut him some slack? It ain't easy making Facebook posts and self-promoting all day.

There is an old song. “Burning Bridges” by the Mike Curb congregation that kind of applies. It seems to be the theme for the Boy Blunder’s term as mayor. He cannot work across the aisle and all he does is burn bridges with every one time ally he has. It makes him look like a narcissist.

No doubt working on a solution to the black thug culture and record high black murder rate.

There is an old song. “My Racist Buddies” by the Tony's Kansas City Choir that kind of applies. It seems to be the theme for every comment made here. Nothing can be done without being viewed through the narrow "hate black people" prism. It makes you look like imbeciles.

Why didn’t you caption it WHITE LEADERS?

The Libtard media and Demoncraps want you to believe racism is a huge issue because they win elections based on dividing people into buckets. The truth is Obama wouldn't have gotten elected twice if America were that racist.

The chucklowe media and Republifucks want you to believe racism isn't a huge issue because they lose elections based on dividing people into buckets. The truth is Trump wouldn't have won the popular vote twice if America were that racist.

Wait, I mean once.

No, sorry, no times.

<<< whatever ignorant as fuck chucklowe >>>

Mayor mcracist couldn’t show his ugly racist ass at arrowhead because governor parsons threw down some truth and it was extremely embarrassing for the soon to be former mayor, it stung mayor mcracist to the core, he was too embarrassed to show up and now we the citizens know the truth about mayor lickass and his bald faced lies.

Fun fact for mayor mcracist and blue anon conspiracy theorist nut job, Missouri ranks 10th in the nation for most completed vaccinations blowing all the whining and lies from the mayor and local media out of the water.

Kc, platte, clay and Jackson county have given out 282,489 vaccinations so far. Kc has over 140,000 and remains number two for most vaccines given in the entire state.

Ouch! Mayor Mcracist was just bitch slapped into the next century! Hahahahaha!

"Missouri ranks 10th in the nation for most completed vaccinations"

Why do you chucklowes lie so much knowing your "facts" can be easily disproven in about thirty seconds?

I mean, that was so easy to disprove it's laughable.

I mean look for yourself.

Can you chucklowes count as high as 45? You're going to need to.

Yeah, sure, the CDC always tells it straight.

Next up, a press release from The World Health Organization. The virus came from the North Pole last December 24th around midnight. Santa is a White Supremacist and released it to help Trump.

President Depends fell today because he didn't have 2 masks on.

Rand Paul just curb stomped your hero Dr. "I am wrong about everything" Fauci.

Best video of the week, he just eviscerates this fuckin asshole.

Bumbling bafoon bidumb fell down three times today, he can’t walk, talk or see what’s going on around him. Why in the hell did the despicable dimwit party have to steal an election and insert a mentally and physically unfit dunce and serial sex offender in office?

Because he’s so brain dead he has no clue that he’s being used and totally embarrassed by his own party, technically this could be elderly abuse and something should be done about it ASAP.

5:56 that’s why mayor mcracist didn’t show up at arrowhead today, he was eviscerated by the governor of the great state of Missouri!

It was amazing to hear the truth for a change!

That the same Rand Paul who certified himself as an Opthalmologist by a board he created? That Rand Paul? The fraudulent "doctor?"

The truth from the voices in your head?

Oh yes, 5:59! The stolen election nobody could prove! Do tell us more. We're all so interested in your delusions.

We don’t accept anything from the cdc since their numbers are from over two weeks ago, plus the article was written by the New York Times. Double fail.

But facts are a bitch amirite blue anon nut job at 5:51! Hahahahaha!

It’s looking like the blue anon weird dude just got knocked the fuck out! He’s now in the same place as the dumbass mayor of killa shitty, somewhere in the next century! Roflmao!

So post a link to it and turn your falsehoods into reality. We'll wait.

"We don’t accept anything from the cdc"...who is "we?" You and your fellow chucklowes?

Here's some news for ya, chucklowe: the CDC keeps the official data, not your Newsmax crackpot or YouTube doctor.

I don't think so, the chucklowes can't prove what they say, a la the STOLEN ELECTION.

^^^ and the blue anon dickhead still thinks Russia Russia Russia and hitlery had the election stolen from her amirite! Hahahahaha!

6:31 stay down dummy! You’ve been knocked the fuck out so many times that you have no idea where you are or where your boyfriend is sucking dick at right now!

Agree. His wife and family and the entire Democrap party are despicable mentally ill abusers who abuse children with their trans by munchausen proxy and have a contest between their governors on who can kill off the most elderly in the shortest amount of time. Cuomo may have first place, but I can’t be sure.

My ass is kinda girlish! The ladies love it!

Nothing wrong with being racist, just means you are intelligent, awake, and paying attention.

Lesser beings want to take what you have because they are unable to produce it themselves.

Do not let anyone tell you that ppl who evolved separately, under different circumstances, and act differently for tens of thousands of years are the same.

His weak ass can go to Royals and Chiefs games but he can’t attend a humanitarian effort? What a bitch. The KCPD officers that provide him security should be ashamed of their assignment. You know, it’s not an obligation to provide security for the mayor, it’s a courtesy. The truth is, it’s a huge waste of money. The amount of overtime money spent on that assignment is staggering.

Gosh, he wasn't even missed. Imagine that.