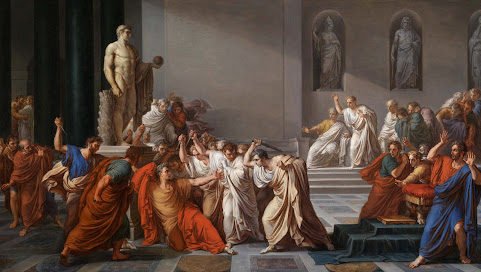 Because this blog is mostly powered by paranoia, classical references and the tragic knowledge that human history is mostly just one big justification of murder in order to garner power.

Beware the Ides of March. But Why?

And tall of THAT inspires this late night peek at pop culture, community news and top headlines . . .

Kansas Citians took home some hardware at the 63rd annual Grammy Awards last night. These winners and nominees had a variety of roles in the awards roster including producing, singing, playing saxophone, and more. Winners: David Frost (Producer of the Year, Classical) Frost won the music industry's highest honor for his role in seven recordings including the Kansas City Symphony's "Holst: The Planets; The Perfect Fool."

KANSAS CITY, Mo. - As tornado warnings swept across the Kansas City metro, at least one Overland Park neighborhood sustained damage to homes and property. Tornado sirens began blaring shortly before 5 p.m. in the area of 107th Street and Antioch Road.

Retired Lt. Col. Alexander Vindman, who testified in the first impeachment trial of former President Trump, said Monday he "should have sued those who amplified his campaign of defamation." Driving the news: In an op-ed for Lawfare, titled "Can Litigation Help Deradicalize Right-Wing Media?," Vindman wrote, "After I testified about then-President Trump's misconduct on Ukraine before the House impeachment inquiry, Trump and his allies targeted me and my family for retribution."

"War over Taiwan would be unthinkable," said Eric Sayers, a visiting fellow at the American Enterprise Institute. "A major challenge Washington faces is that Taiwan has been viewed by many as a 2035 planning problem. ... The [Chinese army's] capabilities have now matured to such a degree that this is no longer a dilemma we can afford to push off."

Covid-19 antibodies present in about 1 in 5 blood donations from unvaccinated people, according to data from the American Red Cross

In the first week of March, more than 20% of blood donations from unvaccinated people had Covid-19 antibodies, according to data shared with CNN by the American Red Cross.

Much of Europe tightens anti-pandemic rules as virus surges

ROME (AP) - Tighter restrictions aimed at reining in surging coronavirus infections took hold in much of Italy and parts of Poland on Monday, while in France, Paris risks being slapped with a weekend lockdown as ICUs near saturation with COVID-19 patients.

OLATHE, Kan. - Once you work at The Johnson Co. sheriff's office, you're part of a family. A group of two sergeants and three deputies proved that Monday. The five employees shaved their heads in support of Erika Colacicco. The 49 year-old Administrative Assistant at the office was diagnosed with breast cancer in July.

NO MORE TORNADO WARNINGS, THE LIGHTNING IS COMING DOWN TO. I THINK THIS TOUGHBOOK CONTINUE TO DWINDLE BY 9:00 TONIGHT, SHOULD BE CLOUDY MAYBE A LITTLE BIT OF FOG. RAIN THREAT SHOULD BE OVER FOR A WHILE.