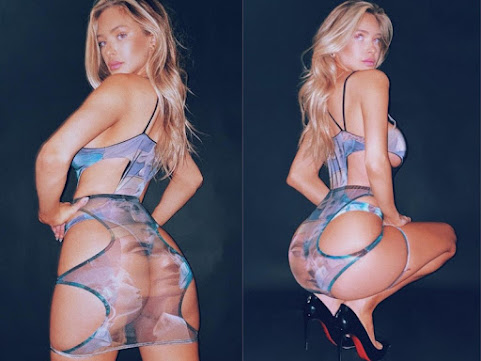 Right now hottie Hannah and her first rate fashion promo game inspires us to take a peek at pop culture, community news and some well-rounded top headlines to start the day.

KANSAS CITY, Mo. - At one point, Kansas City was facing a more than $70 million budget shortfall largely because of the pandemic. But funding from President Joe Biden's $1.9 trillion American Rescue Plan will give the city $195.5 million. Leaders said the money will get Kansas City out of the hole and rebuild its [...]

KANSAS CITY, MO (KCTV) -- One year into the pandemic, the Community Blood Center says there is a blood shortage in the region. They say there is currently just over a four-day supply of blood, which is well below what local hospitals need.

After the first annual Queer Narratives Festival rotated on exhibition last month and was featured at InterUrban ArtHouse, No Divide KC is calling for artists of all backgrounds and mediums to highlight in August's festival. // Image courtesy of No Divide KC Local arts nonprofit No Divide KC is officially opening the floor to artists for its second annual Queer...

Hannah made one more major alteration in her follow-up photo by trading her smile for a more sultry facial expression. In the comments section of her post, many of her admirers commented on how much they loved the radiant smile that was missing in her second pic.

As investigators piece together the movements and the motive of the suspect in this week's deadly shootings at three Atlanta-area spas, there's a fierce debate underway over whether he should face hate crime charges for the attacks that left eight people dead, including six Asian women.


Birth Of A Nation

The House is set to vote Thursday on two proposals that would legalize subsets of the estimated 11 million immigrants living in the U.S. without legal permission, as Democrats gauge the chances of approving immigration legislation and sending it to President Biden's desk.

Putin challenges Biden to chat with him in a 'live' conversation

Russian President Vladimir Putin challenged President Biden to an on-air conversation to discuss Biden's latest warning that Putin would "pay a price," following a report containing evidence of attempted Russian-interference in the 2020 election. "I've just thought of this now," Putin told a reporter in Moscow Thursday.


PARIS IS BURNING WITH COVID PLAGUE YET AGAIN!!!

The French government has imposed a month-long lockdown on Paris and parts of northern France after a faltering vaccine rollout and spread of highly contagious coronavirus variants forced the president, Emmanuel Macron, to shift course.

Family first! Kris Jenner spoke out about her daughter Kim Kardashian 's split from Kanye West one month after the Skims creator filed for divorce. "I think it's always going to be hard anytime, you know, there's a lot of kids," Jenner, 65, said on The Kyle & Jackie O Show on Thursday, March 18.

If you walk into this house off West Main Street in Blue Springs, Missouri, the smell of coffee will catch your attention about the same time as the sound of the grinders. "Our location is in a house built in 1898, so it's actually a coffee house!"

University of Missouri - Kansas City officials on Thursday announced plans to create three new schools and eliminate several existing academic programs. The cuts are a part of an initiative the university is calling "UMKC Forward." It is intended to recover from pandemic-related financial shortcomings and boost enrollment.

After a week or rain, thunderstorms, hail, tornadoes and even some snow in the metro area, the sun will finally return on Friday.

Imagine Dragons - Follow You is the song of the day and this is the OPEN THREAD for right now.

a debate shouldn't be a troll.

biden, the tough guy. Biden would lose a conversation, he won't agree.
A sane person would rather go to tiaga with Putin than anywhere with biden

and jen paski is a dumb bitch just george stepinshit.

^^^ Hey, good for you. That almost qualifies as a thought. Consider formulating one. Then try doing it for yourself and not just repeating what they told you on Faux news.

Sorry, 6:09, it's more of a thought than poor President Houseplant can work up right now, and now everyone can see it.

In the list of how KCMO is going to spend its $195 million in stimulus money the "and more" is really the place to watch.
What's certain is that all the money will be rushing out of the doors at 12th and Oak and be long gone before there's any local media scrutiny whatsoever.
And lots and lots of press conferences, TV appearances, ponderous announcements, taking credit, and selfies by smiley selfies incompetent Lucas.
Public relations, glitz, and massive waste all at taxpayer expense.
It's the KCMO way on steroids.

seriously though, what can the black community in KC tell us about the Luba and Lunda Empires? All the black high school kids or college kids in KC, how many have ever heard of them before?

Looks like Joe Biden is putting on a show for the American people. Putin would wipe the floor with him. Come on Joe take the challenge I dare ya.

FYI With Obama and Clinton starting the Russia Russia Russia scandle I wonder why both of Obama's girls have Russian names. Could it be the love of Russia that they have? After all Obama did whisper secrets into Putin's ear. Remember?


Great! I will put out a sign from now on......Help wanted dreamers only. American's need not apply.

Luba Empire
Luba-Lunda states, a complex of states that flourished in Central Africa (in the present-day Democratic Republic of the Congo) from the late 15th to the late 19th century.

Note to TKC male readers: The 2021 Queer Narratives Festival, from August 2 to August 7, is not a good place to pick up chicks unless you're a ladyboy.

The relationship of the Tuareg people and Gaddafi?

The relationship of Omar al-Bashir and UAE?

It's great to finally have a real President who will stand up to Putin and not bend over for him and play his puppet like Trump did. Trump was Putin's bitch and the world knew it.

Basement Biden thinks he can scare Putin like he did "Corn Pop" at the swimming pool one summer a long time ago. Biden said he wanted to take Trump behind a school to show him who's boss. I'd like to see that.

China is rolling over Basement Biden because they own him and his slimy son from past financial deals.

^^and yet that is NOT happening. Weird.

Surely 7:48 at least knows who the Lion of Zimbabwe is!

any black person that does not know who Thomas Mapfumo is, fuck you.

Looks like Joe Biden is Vladmir Putin's little bitch for the world to see.

Biden and Georgie Stnopopuss call Putin a "killer" and Putin picks up the challenge.

Putin has so much disrespect for Biden; he challenges the senile crook to a live debate.

Sadly, for China Joe Biden, Georgie Stenopopuss or Chrissy Wallace would not be moderators.

Biden has already hidden in his basement again while Dr. Jill Biden changes his Depends.

Got a feeling this is how it played out with "CornPop" as well back in Biden's younger days.

Dementia Joe is too “busy” to talk to another world leader right now. His wife-mother won’t let him come out.

^Yes, he's too busy beating the Rona, keeping the US economy rolling, smacking down Putin and leading by example. A real President for once.

Haha! What? He is hiding from the press due to his obvious mental deterioration, his administration has fumbled the emerging border crisis that he created, and he's broken campaign promises left and right--so much so that even the friendly press is turning on him. He can only manage brief, highly scripted interviews with party hacks, and he can't remember who is President as he showed yesterday. Putin owned him with a simple request for a discussion, knowing President Applesauce can't even manage that.

He can't smack down a toddler, even though he basically is one at this point.

^^and yet he beat the shit out of Trump though. Weird.

^^and yet he stayed in the basement while his proxies stole the election for him. Weird.

While interviewing for "basement blogger intern" Hannah declared she was ready to assume the position and had nothing to hide!!!

So far only one institution admits it discriminates against Asians: Harvard University. The anti Asian hate at Harvard must be palpable, but lefties like the kind of hate that benefits their captive voter base, African Americans. Nearly all of the unprovoked physical assaults against elderly Asians have been done by black males, but the left ignores that messy detail. But when a clearly deranged white kid kills some people who are Asians and some who are not, the left concludes illogically that it must be due to race hatred.

Biden shit his Depends when Putin challenged him to a debate.

Joe Biden is an embarrassment to the United States.

The Corporate Elites and Media who rigged the election to get Biden in office are traitors.

Biden reduced President Trump's stimulus proposal for working Americans from $2,000 to $1,400 so he could give Democrat Party and Union bosses a trillion dollars of taxpayer funds.

Gas prices are near $3.00 a gallon already under Biden.

The Global elites and Communist China profit from Biden while working Americans suffer.

Harvard discriminates against Asians because Jews hate Asians. Jews look at them as sub-human. Asians are much smarter than Jews and they can't let that happen.
Harvard is owned lock,stock and barrel by the yids.

Holy cow, Biden can't even get up the stairs on air force one! Looks like he may have hit his head too. This guy's gonna be tough with China and Russia? He needs a chair lift!

Hearing you chucklowes go on about the "stolen" election is both hilarious and sad at the same time.

Trump was a moron. Admit it.

^^ha! Geezer heads getting kicked in. love it.

Chimpy is headlining at the Queer Narratives Festival this year with me!

Chimpy! Quick! I know you were severely clowned this week for showing your monkey ass, but you still gotta help us with the hot takes from the CDC! Lolol

Moron or not, he wasn't afraid of open conversations or non-staged encounters with the press, unlike President Applesauce who can't manage stairs. Admit it.

Sure, anyone with any sense at all admits all that, but what are you babbling about?

Ok, just scanning here, not expecting much. Ah yes. Standard vulgarity as argument, old and irrelevant allegations about someone who is no longer President, and complete failure to offer anything but non sequitur.

So again. Deal with the present, in which your guy isn't allowed to talk to the press without extremely careful procedures, can't remember who is President, and...again...can't manage stairs. Original argument stands; Trump handled a hostile press nearly every day, and poor Biden has to be handled with kud gloves due to his obvious deterioration.