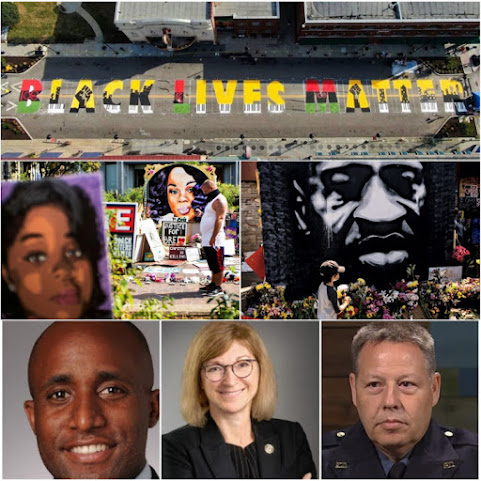 Despite the upcoming influx of "free money" courtesy of Prez Biden, we aren't noticing a lot of happy people in Kansas City. In fact, once again, local political hostilities intensify as warmer weather approaches.

Just as many TKC readers predicted, arguments against the top cop have been exacerbated following recent protest over police brutality . . .

Last night a low-grade charge against KCPD only served to exacerbate criticism among local leaders.

Across the nation there's renewed outcry against deadly police action . . .

This week Americans were reminded that deadly disputes can not only set the nation on fire but also push municipalities closer to bankruptcy . . . A not-so-fun fact, insurance companies have also discovered that underwriting "political violence" is a growing segment of their biz.

Last week bold protest brought rifles to the home of a local elected official and set the stage for increasingly heightened tensions among the activist class who seem ready to retake local streets . . .

WE NOTICE MANY LOCALS WORKING TO JOIN OR DISPUTE THE NEXT KANSAS CITY "MOSTLY PEACEFUL" DEMONSTRATION AGAINST POLICE . . . BUT IS THERE ANY INDEPENDENT VOICE WORKING TO ALLEVIATE HOSTILITIES BEFORE THE NEXT DEADLY ALTERCATION SPARKS A RIOT?!?

The punchline here is that both police and activists claim that's exactly what they're doing.

To be fair, tensions between community & authorities are a constant. Right now in Greece, the cradle of Western Civilization, they're rioting after video clips emerged depicting a police officer beating man with an iron baton for breaking Covid restrictions.

Nevertheless, as the rule of Prez Biden aggravates political divisions across the nation, it's clear the stage is once again set for continued clashes against law enforcement and our local political leadership isn't doing much of anything to address the worsening situation.

this is the mayor's job.

As well he should. Sorry CHUD, the pandemic is not over even if Trump's career is ruined. Your theories are bunk!

Most people would rather just make popcorn and watch it burn. Or keep hitting refresh and wait for that Biden money.

Q yelling in the streets no justice no peace. Is that making it better? Didn't think so.

And yet the positive rates are plummeting. You are a sad excuse for a human 6:06 Always at the ready to spread your H8.

The pettiness of the mayor and prosecutor as well as Blm have deepened the divide in this city and now the stage is set. I just hope the police show up for the riots. I wouldn’t blame them if they didn’t out of fear of a city administration who only cares about their own personal interest.

Q has his sights set on being the next US Senator from MO so KCMO is on it's own for awhile unless the leftist radicals do something that gives him "Woke" props. This is what happens when a 30 something with zero experience is elected mayor of a large city.

Well at least the mayor did tell the not at all mostly peaceful police rioters to back off last summer.

^^^^^
Someone should tell empty suit Lucas that a U S Senator has to be elected by voters IN THE ENTIRE STATE OF MISSOURI, not just KCMO's Third District.
Lucas has become so taken with all his own publicity that he doesn't have a clue about trying to play in any league except the D League of KCMO government.
And his track record and performance as mayor are both terrible.
Clueless on the plains.
Sad.

Aren't you the same idiot who kept predicting BLM and Q killed the plaza?
Sure was a lot of dead traffic on the dead plaza today.

raise your son to be a crackhead..let hims stroke out while fighting police scam YUUUGE settement!

Buckle up people there will be no conviction in Minneapolis. The BLM and their Karencratic supporters will throw a childish fit. After all the definition of democracy is mob rule. Fortunately this is a republic with laws that are suppose to protect mature citizens from mob rule.

The day the innocent verdict is announced should be a blue flu day for KCMO cops. Since they cannot defend themselves with being prosecuted.

All I have to say is THANK GOD I DON'T LIVE IN KCMO, and never voted for that piece of shit Mayor you have in your city. What an absolute fucking MESS!!!!!! He's the cause of this. Fucking SCUMBAG.

Not my problem anymore! You have fun with k Kansas City? 🤣😏🍿🥨🍺


I'm getting sick of black democrats dividing our country and causing civil wars in our cities. Breonna Taylor got her self killed and George Floyd died of a heart attack due to drugs plus he was a criminal. You black democrats need to have your faces rubbed in the grave dirt of the people who lost lives fighting for your ignorant and selfish asses. You people are weak and that's why you have to act like bullies. You make us all SICK dirty ass idiots.

Jury selection began this week for the conviction…Oops, sorry: I mean the trial of former police officer Derek Chauvin on charges that he murdered the Holy Blessed Martyr George Floyd in Minneapolis last year. As I write, here we are in Day Five of the jury selection, with half of the jurors selected.

And even if he isn't found guilty—or possibly even, as I've noted before, if he is found guilty—Kristen Clarke, the black supremacist dingbat who Joe Biden has nominated to run the Civil Rights division of his Justice Department, will come after him with double jeopardy charges: "OK, so you didn't murder him; but you did fatally deprive him of his civil rights! Ha! —got ya!"

This is American jurisprudence in the 21st century.

His defense will apparently be that he was restraining a seriously obstreperous perp, using a common and approved method of restraint, until the ambulance arrived. [Neck Hold Used By Minneapolis Officer Was Approved By Department Policy, LawOfficer.com, May 29, 2020] And that's exactly what it looked like to me.

BLM is a violent, domestic terrorist organization and until they are shot dead in the streets as they burn, loot and murder, nothing will change.

^^^ and he’s still dead and can nevar spend it! Hahahahaha!

Mayor mcracist and Petersucker are solely responsible for any “mostly peaceful protests” that cause damage, injury or loss of life in killa shitty. They’ve done absolutely nothing but blame cops for everything, trump up bullshit charges on cops that they can’t win further enraging the uneducated racist murderous blacks because they lead them to believe cops bad despite the evidence that says otherwise.

I hope kc burns to the ground because of the ignorant “leaders” there.

^^^They have single-handedly turned KC into a miserable, third world shithole ghetto. KCMO is a dying city, if not already dead. All in the name of a petty, malignant narcissist named Quinton Lucas and his enablers on the city council and the scum-loving city prosecutor. RIP.

Bob, is that you?

Typical dimwit move to blame everybody else but themselves, the actual idiots feeding into the bullshit and the actual ones causing this disaster to escalate.

If there wasn't a crisis they will create one, because you nevar let a good crisis go to waste.

The more conservatives of KC should rise up and start taking back these city offices and get the city back in financial shape.....get the infrastructure repaired and ready for the future and fight back the progressives.

This continual speech from the activists against the police and asking more and more for individuals needs to stop. Let's work together to fix things and stop this continued violence and threat of!!

More lib whining. It's what they do best.

they see uncle joe just a failin' wondering all along if the right choice was made at election time.

i see it as a way of slowing down racism some - who will the poor turn to when things get worse? help from uncle donald may not be possible anymore.

I hope Baker will personally prosecute this case. She will not be happy when the judge dismisses the case or he is found not guilty.