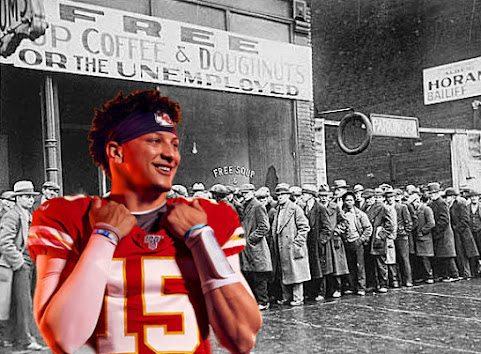 To wit and because we'll see fanbois try to spin this one . . .

It's a minor victory but credit to those among our blog community who noted during contract negotiations that PATRICK MAHOMES NEVER SHOULD'VE TAKEN LESS MONEY for his latest extension. Don't get it twisted, we don't feel sorry for the baller who has already amassed a far greater fortune than most in Kansas City. Still, leaving money on the table isn't a good look for a dude touted as mogul in the making.

Now he's stuck with a team that is unlikely to power a "dynasty" and years upon years of rebuilding promises.

"Per league sources, the move would save Kansas City $17 million against the 2021 NFL salary cap, ESPN reported.

"The news comes one day after the Chiefs announced they have parted ways with left tackle and former No. 1 overall pick Eric Fisher and All-Pro right tackle Mitchell Schwartz. KC also indicated it wasn’t going to resign center Austin Reiter on Thursday."

Let's not pretend that it's not all about the money given that latest tech move from the QB . . .

Museum of Mahomes: KC quarterback jumping into NFT business with digital art auction for good cause