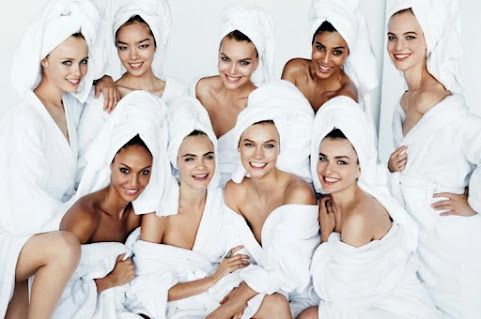 Once again we reference "the towel series" from Vogue as an educational example of the importance of hottie models in the public discourse. Accordingly, we also share some equally important items from community news, pop culture and top headlines.

1 hospitalized with severe burns after motel fire in Kansas City

The Kansas City Fire Department said a man has severe, but non-life-threatening burns, after a fire at an extended stay motel Monday morning in Kansas City, Missouri.KCFD responded around 6:30 a.m. to the Sky-Vu Motel on U.S. Highway 40, north of Interstate 70 and Interstate 435.

OLATHE, Kan. - A lot on the northwest corner of 151st Street and Quivira Road has sat vacant for more than a decade. Now, Olathe Health is looking to build a two-story medical office building on it. Jason Neat lives in the Harmony View West subdivision next to where the more than 67,000-square-foot proposed building and its nearly 300 parking spots would go.

OVERLAND PARK, Kan. - Slowly but surely, convention centers in the metro are starting to book shows again. The Johnson County Home and Garden Show drew thousands of people this weekend to the Overland Park Convention Center. Businesses and customers are hoping that it is the beginning of the end of the coronavirus shutdowns.

Millions of women around the world are taking to the streets today to mark International Women's Day - in a year where women have been disproportionately impacted by rising poverty, unemployment and violence during the pandemic. We hear voices from protests in the Philippines, Mexico and Guatemala.

WASHINGTON (AP) - With President Joe Biden on the verge of his first big legislative victory, a key moderate Democrat says he's open to changing Senate rules that could allow for more party-line votes to push through other parts of the White House's agenda such as voting rights. West Virginia Sen.

The Supreme Court on Monday denied a bid by former President Trump to nullify his electoral loss in Wisconsin, rejecting the former president's final pending appeal over the results of the 2020 election.

Biden Will Establish A Gender Policy Council Within The White House

subscribe to The NPR Politics Podcast podcast President Biden will mark International Women's Day on Monday by signing two executive orders geared toward promoting gender equity, both in the United States and around the world. According to an administration official speaking on background, the goal of the orders is "restoring America as a champion for gender equity and equality."

CNN 's Chris Cuomo is getting ripped as being "f-ing offensive" after joking that he is "black on the inside." The 50-year-old brother of embattled New York Gov. Andrew Cuomo was quickly roasted after a clip was shared Friday showing him hand over to CNN colleague Don Lemon by singing the theme to 1970s' TV show "Good Times."

Prince Harry and Meghan, Duchess of Sussex, told Oprah Winfrey about their exit from the royal family.


Paddy Gets The Boot

Patrick Mahomes is recovering from offseason toe surgery, and now we have some evidence. Mahomes' fiancee Brittany Matthews shared a photo on Instagram Saturday. She said that she and Mahomes were out for a date the night before and all she did was look at photos of their baby daughter.

In honor of International Women's Day today, we're celebrating both local women-led businesses and United Women's Empowerment-United WE, formerly Women's Foundation, an organization known for advancing women's economic and civic leadership. "Kansas City is home to many amazing women-owned businesses and we are proud to partner with them this Women's History Month," says United WE...

Warm and windy weather to start off this new work week. Temperatures will quickly climb today into the lower 70s by this afternoon with strong winds. An increased risk for fire danger is expected again today for our area. Burning is not advised for our area today, any fire that to spark could quickly escalate.

Cyndi Lauper - Girls Just Want To Have Fun is our Internatational Women's Day song of the day and this is the OPEN THREAD for right now.