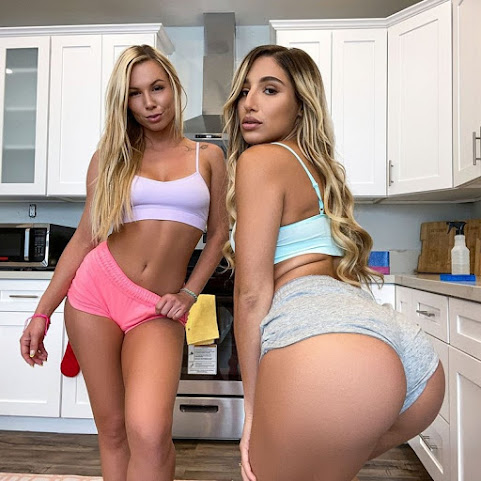 Actually, we didn't go anywhere but that running gag is one of our favorites along with big booty pr0n stars like Abella Danger and her promo work that inspires this peek at pop culture, community news and top headlines.

So here's a question: What does a theater company do during a pandemic? Some produce "virtual" shows. Others stage outdoor productions. One thing they don't do is stage plays and musicals for full houses. In the case of Metropolitan Ensemble Theatre, artistic director and co-founder Karen Paisley decided it was an ideal time to renovate.

The 15th Annual Dancing With The Kansas City Stars!, a benefit for Cristo Rey Kansas City, will be held on June 26th at the Sheraton Kansas City Hotel at Crown Center. The Airline History Museum was the setting to announce seven stars, Nick Durand, Phil Glynn, Mike Jackson, Mary Haggerty Kroening, Kate O'Keefe, Julie Towner, and Sarah Walsh, who will dance for the students of Cristo Rey Kansas City.

We Asked. You Answered. Kansas City's Fave Coffee Shops-As Told By You - In Kansas City

When we put out the call for our astute readers to reveal their favorite hyper-local coffee shop, our inbox was flooded. Two things to note: 1) Oddly, not one of you picked the same beanery, and 2) you are really, really particular about staking claim to which nearby coffeehouse is your go-to.


Pr0n Cleanup Offers Sneak Peek At Future Of The Internets

Fauci: The partisan divide on taking the Covid-19 vaccine makes “absolutely no sense”

Dr. Anthony Fauci, the United States' top federal infectious disease expert, and other scientists, estimate 75 to 85 percent of Americans need to get vaccinated in order to bring the coronavirus pandemic under control - new polling, however, has revealed a major challenge to achieving that goal: Hesitancy to take the vaccine, particularly among Republicans.

Senate Democrats got a scare some weeks ago. Sen. Patrick Leahy, D-Vt., is the Senate's president pro tempore, the most senior member of the majority party, and third in line to the presidency. Leahy joined the Senate in 1975 - when President Gerald Ford was in office.

London Mayor Sadiq Khan on Sunday ordered investigations into how the Metropolitan Police handled a peaceful vigil for Sarah Everard, a 33-year-old woman whose kidnapping and death - allegedly at the hands of a police officer - have left the UK reeling.

Prince Harry still seems pretty upset about losing his Royal security privileges, and ya can't blame him ... especially because cops say he and Meghan Markle had an unwanted visitor on their property TWICE during the holidays. Law enforcement sources tell TMZ ...

Billboard's two global charts (the latest of which are dated March 13) began with the lists dated Sept. 19, 2020, and rank songs based on streaming and sales activity culled from more than 200 territories around the world, as compiled by MRC Data. The Billboard Global 200 is inclusive of worldwide data and the Billboard Global Excl.

Mizzou, Oklahoma to matchup in the first round of the NCAA Tournament

The Chris Jones disrespect is getting out of hand

When discussing the K.C. Chiefs pass rush in 2020, fans can't help but be disappointed as the team ranked just 19th in sacks per game among all NFL teams despite the fact that the Chiefs have over $200 million tied up into their defensive line position group.

Rain will slowly taper off through this evening with a few lingering sprinkles or light showers around daybreak on Monday. Another quick wave moves in by the afternoon producing scattered showers and a few thunderstorms for our area. There's going to be a large spread in temperatures Monday afternoon.

Olivia Rodrigo - drivers license is the song of the day and this is the OPEN THREAD for right now.