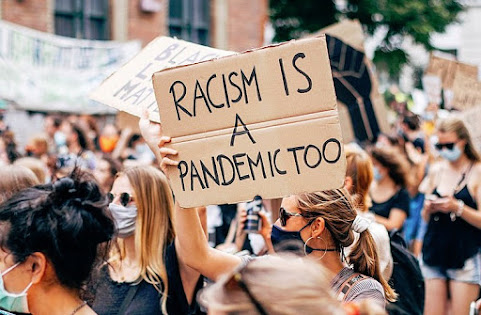 We share a few important Kansas City reports as pandemic politics persist whilst locals desperately search for the plague cure.

There should be enough vaccine for ANYONE who wants it. These culture war issues are unproductive.

^^The culture war issues are only brought up by libs.

^^^ B.S. I guess you haven't watched Fox news lately or what about President Trump and his racist conspiracies? Do your research!

Why bother vaccinating blacks. Many will be dead by the end of the year. Q will make sure there is no end to black on black murders.

7:55 Trump in no longer president, get over it; the US is Bidens now so any blame game goes to him, 7:52 is exactly right, try listening to MSNBC or CNN everything they spout is a conspiracy theory....MARCH 4 anyone???????

Dr. Rex Archer fucked up the ordering and distribution of the Covid-19 vaccine in Kansas City.

There is so much vaccine; the age is now dropped to 50 for those to get the vaccine in the 1st phase.

This is not a racial issue, it is a typical Kansas City government fuck up issue.

Hilarious! Do the one about Russia next!

FBI once again proved its ineptitude by predicting a March 4th Capitol insurrection that never happened.

Hey, when do you think they're going to let Sleepy Joe talk to the press? He's setting a record for not doing so. Maybe it's because he's a silver alert patient who needs an army of handlers just to read from a teleprompter without fucking up.

Nobody wants to see a naked Dr. Jill Biden while receiving their Covid-19 vaccine shot.

She is a flabby ass fatty !!

The Covid HOAX, used along with illegal actions by state legislators to steal the 2020 election, lies from BIG TECH, the Deep State and the RADIX Malorum of all evil, the Main Stream lying Media have elevated the most corrupt cabal of vampires into office in the history of this nation.

"The damage done by the Biden administration in just six weeks, by whomever is calling the shots, has been catastrophic. The border crisis, the renewed enabling of child sex-trafficking and cartel profits, the militarization of D.C. for show, the tyranny of the scourge that is social media, the blatant censorship of conservative voices, the demonization of law enforcement, the truly fake news that characterizes most of our media, taken together is a recipe for the disaster that will be the left’s implementation of a communist tyranny. It’s happening now."

This from the smartest black chick penning columns today Jennifer O'Connel, reveals the truth behind H.R.1 and the devastating impact it will have on a watered down, incompetent, gelded work force that answers to ideologues.

We are truly fucked and as our 'leaders' debate the efficacy of the Blue State Covid hand outs to bail out those same Blue States at the expense of hard working people in Red States we should remember this moment as we turned ever more stridently, against our will, at the whim and caprice of the idiots now in office towards a Chinese Communist, Social Credit Score State, run by fuckin buffoons like our mayor and Wrecks Archer.

The blacks simply don’t want it, the media has them scared to death about it. This is where lickass and dr wrecks have failed the blacks once again, they should be out there talking to the black community about the vaccine but no, they haven’t so these sorts of problems happen with a lack of communication.

I work with around 90 blacks and they’ve all said they won’t take it because their pastors have said it’s dangerous and will prevent them from having kids.....

Who the hell says this kind of crap to their church members? And why hasn’t city hall stepped up to dismiss the lies?

Why do they care about having kids?
They sure as fuck raise them


This is BS If the numbers show more whites than blacks it's because blacks don't want it. Getting sick of this issue of racism. Divide and conquer is what the radical left is trying to do and people are too stupid to see it. They want war in this country and they just might get it. But I will say this I don't see how black people can even go out the front door they are hated now way more than in the history of our country. It will NEVER be repaired! Good going democrats.

First off the fat fake dr wrecks has the info on who’s getting the vaccination because you’re required to fill out the forms that ask that question, secondly the Missouri website says otherwise about who’s getting it now, whites 13%, blacks 5%, mixed race 30.8%.

We all know mixed race is black and white right, so in reality 35.8% black out of 693,391 blacks in the state far exceeds anyone else getting the shots. Mahomes, obummer, Haley berry and a whole assortment of mixed people call themselves black amirite. These numbers do nothing but divide and anyone with half a brain knows better than to believe this bullshit. All other races combined don’t add up to 35.8%.

Kc just can’t do anything right when it comes to governance and to allow such stories to continue is an out right lie and plain racist.

The city is just gonna have to force the blacks to take the shot or stand up and tell the truth as to why they aren’t.

"It turns out the pandemic is a pretty big part of the news cycle and that’s not going away any time soon...It turns out it's really good for ratings." Jason Kilar on post-Trump CNN.

The Media is absolutely, THE ENEMY OF THE AMERICAN PEOPLE.

Chuck plagues the comments with his ranting again. No thanks.

Chimpy plagues the comments with his ranting again. No thanks.

^^^ Find a place on Parler please. You don't even live in Kansas City.

I see whitey is behind two other groups of people that the media failed to identify as being ahead of the blacks and I take it the media doesn’t care about American Indians or the Asians, that’s racist right there.

Chimpy plagues the comments with his ranting again. No thanks.

Meanwhile the state of Missouri has vaccinated 23% of the willing population. It appears despite kc’s deadly bungling of the vaccinations the rest of the state is doing just fine, hell, even shitty Louis is doing better than we are and that’s saying something! Lmao!

Blacks could have scheduled their vaccine appointments just as easily as all the whites and Hispanics who did, and got vaccinated. Democrats have made their black voting block so helpless and dependent that they can't even schedule shots for themselves.

This is what the racist media really is saying, 60.1% of all other races are getting vaccinated compared to the mean ole whiteys 13% vaccination rates.

Bottom line is whitey is getting screwed again.


I see the following item is about zoo Koalas with Chalmyida. Chimpy, please use a condom! Also, you're forgetting your pussy^^ marks again.

At least you got the name right this time Chimpster!

I read that the gorillas in a CA zoo were vacinated yesterday and I'm still looking for a vaccination appointment. That's racist!!

Sloppy Joe said blacks weren't smart enough to access the Internet. He thanks you for your 80 million votes. HahahahahahaHahahahahaha

SHUT UP
MASK UP
VAX UP
Y'FUKUPS!

Since the long-term effects from the vaccines are unknown and they are largely experimental, my guess is that the Democraps will want to vaccinate the least desirable (in their minds) first, so that is why there is so much rhetoric about "equitable" distribution among Democrap hacks like Quinton Lucas who are largely dead inside.

Bri, you really are the biggest turd in the punchbowl....congradulations....yu is vry eddgemakated and 'umble too..

Yes, it is Racism when a subgroup of society "CHOOSES " not to follow basic principals of health management practices. It is Racist when people " CHOOSE " not to get vaccinated. Like the same group chooses not to learn how to swim. America is freedom of choices, bitching when you choose the wrong one should not be a Freedom.

Vaccines are like getting a job. So do it , so don't. Notice how the upper crust of the Anti Vaccine party members are willing to get a vaccine now ?