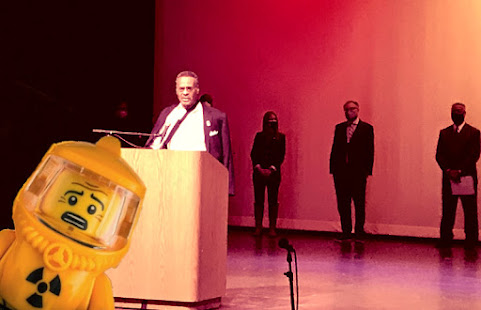 This afternoon progressive politicos gathered in Kansas City's urban core to support the Prez Biden agenda and stand up for the Asian American community who confront increasing threats.

Sadly, there weren't many Asian Americans in the crowd or on stage but the sentiments still hoped for a happy ending in the face of hateration . . .

"Cleaver has tweeted that he is "heartbroken" for the victims and their families of the attack that sent terror through the Asian American community, which has increasingly been targeted during the coronavirus pandemic."

A call for unity and chiding of American popular culture . . .

"Rep. Cleaver referenced the tragedy as a case of what may happen when hateful rhetoric goes unchecked. And he said the world should understand that “the people of goodwill are in the majority.”

“God has been so good to this nation — far better than we deserve,” Cleaver said. “And yet, we still can’t get over skin color.”

Local political support for Prez Biden and a shot at GOP opposition . . .

Rep. Cleaver, who is co-sponsoring (The Covid-19 Hate Crimes Act ) legislation, said he is confident the bill will pass the House, though he is worried about its likelihood of surviving a Senate evenly divided between Democrats and Republicans.

“When legislation comes up like that, there’s a very strong likelihood that 140 (or) 150 people will vote against it,” Cleaver told

More importantly, here's a line that deserves to be highlighted amid reports regarding the deadly Atlanta mass shooting that sparked so much concern . . .

"THE SUSPECT told police that the attacks were not racially motivated. He claimed to have a sex addiction, and authorities said he apparently lashed out at what he saw as sources of temptation."