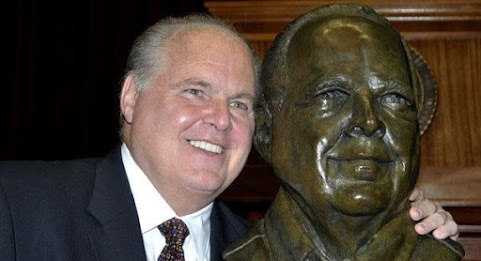 A Change.org petition launched on Saturday has received 1,400 signatures online as of Saturday evening. "The State of Missouri is better than this, we do NOT need to honor this bigoted shock-jock for his years of vile broadcast," the petition's author wrote. "Please, help us tell our State Representatives that this bill needs to be stopped."

The news note doesn't (but should) mention that the Missouri Statehouse is controlled by a Republican SUPER MAJORITY and tribute to Mr. Limbaugh already stands in the Missouri Hall of Fame, inside the grand rotunda of the state capitol in Jefferson City. Missouri "Rush Day" is an inevitability and one of many ceremonial tributes that will be ignored by most broke-ass people in the state who are way more concerned about getting free COVID money than endless political rhetoric amid a worsening American standard of living.

And so, this petition is one of many online efforts that makes for a nice story but might not really change anything other than inspiring our talky playlist for tonight.

Like it or not Rush was an influential and effective radio personality.

When I first started listening to him I thought what an egotistical loudmouth. But, the more I listened I was able to get through all the “noise” and realized he had a very good and positive message. All this lib crap of being a racist and all the other claims are so wrong.

Rush empowered people to take personal responsibility and look at the facts. He boiled down complicated political issues into language people could understand.

Behind the scenes as is now coming out that he was a very generous person. So, the lesson here is do your research, check the media claims vs what Rush said and did, you’ll find he was a good guy.
2/20/21, 11:39 PM

Anonymous said…
Put it to a vote and it will win. The dummocrats wanted to get rid of the statue of Andrew Jackson and they lost.
2/21/21, 1:06 AM

Anonymous said…
"Like it or not Rush was an influential and effective radio personality."

Like it or not Father Coughlin was an influential and effective radio personality.

I would like to know how Rush Limbaugh is bigoted? Funny thing about liberals, if you don't believe what they believe you are either a bigot or a racist. That's all they have to fight back with instead of a legit argument about the matter. They have even gone as far as to say the KKK is all republican. I can't believe how stupid democrats are they believe anything the MSM tells them.
2/21/21, 8:03 AM

Anonymous said…
How sick and twisted do you have to be to dance on his grave like I've been seeing on tv and online, it really makes me sick. Liberals are mentally ill. They have no shame. Even Hannity gave a heartfelt eulogy to Ruth Gader Ginsburg, he said politically they didn't agree but thoughts and prayers for her family and friends. Liberals just mocked and wished him to agony and suffering and that he went hell.
No Shame.
2/21/21, 10:05 AM

Tab said…
Librals love to tell you that love is love while they perpetrate the most shameful acts of H8 imaginable.
2/21/21, 11:00 AM

I would think a conservative would be worth maybe 100k to 300K at the end of life.

Anonymous said…
I would say, the statue is already there, and maybe that’s not a good idea, not to your liking, etc, but it seems like bad manners to now - at the man’s death - to make public statements about him that are not very nice, all the while claiming rush is hateful

By the way I was against the bust in the capital but, now that he is dead, I guess it is ok. Not like he can scandalize us with another pill addiction story. Rush Limbaugh’s housekeeper/pill connect wasn’t even bothering to flush the toilet I bet LOL he was probably cleaning his own place so as not to attract attention having two cleaners
2/21/21, 3:11 PM

Anonymous said…
" but it seems like bad manners to now - at the man’s death - to make public statements about him that are not very nice, all the while claiming rush is hateful"

Oh, we made public statements about his that were hateful when he was alive, so we're consistent.

To paraphrase Bette Davis on Joan Crawford, you're only supposed to say good things about the dead. Rush is dead. Good.
2/21/21, 5:06 PM

Anonymous said…
They move the bust of rush around depending on the political climate concerning all the problems Rush Limbaugh has caused
2/21/21, 6:13 PM

Anonymous said…
Rush was a money hungry materialistic man. All he had to do was screech into the microphone and attract the same type of person that supported Hitler. And he was rewarded with huge sums of money. He divided, grew hate, held people's race against them and used drugs illegally. Lets be honest.
2/21/21, 10:15 PM

Thank you! Very much, for this!

Not only did I sign but I put it out on other social media, too.

Anonymous said…
Rush closed his eyes and passed away. Then opened his eyes and found himself in hell. People who hate, lie, spread division and love money dont go to Heaven (per the Bible).
2/22/21, 10:48 AM

Anonymous said…
Rush certainly had progressives pegged way back in the day before they even boiled to the top of the democrat party. They are the politics of personal destruction. Fewer words have ever been so true.
2/22/21, 11:31 AM

Anonymous said…
I use the Beatitudes as a way to determine if someone makes it to hell. Thats the reason Christ spoke it - to warn people who fell short, but thought they were "good people", that they were headed to hell.

So I judge by God's rules. Like you judge me by your rules.