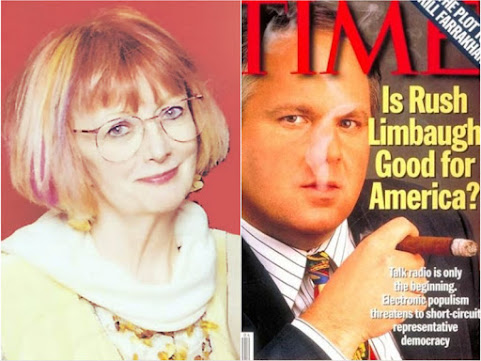 Community journalism perspective another wonderful friend of the blog who shares this important interview . . .

A personal reminiscence from Tom Bedell, who sold radio advertising in Kansas City and nationally--for 31 years.

"Funny thing, the revenue the lovers generated was more than equal to the threatened losses from those that hated him. The station stayed the course and eventually those advertisers that hated benefited from Rush as the station’s ratings rose because of him. So even those that hated him were profiting from a great broadcaster. Isn’t that what broadcasters are supposed to do? Deliver ears. Rush did that. . ."

TV is picking up some of the slack but it's really disappointing how so many locals are trying to ignore the impact of rush. Love him or hate him, you can't deny that he left his mark.

Dogs "leave their mark" the same way Rush did: by shitting on the lawn.

Rush is in hell. So why does this matter now? Who care about "return on investment" of 1980's radio ad budgets.

Rush was the greatest personality to grace the planet earth, he will be missed.

And yet, like a fart in the wind, his bad odor will eventually only be a bad memory. And he'll still be dead. Weird.

6:54 - you are a typical. pissed off liberal who spouts hate with no knowledge of facts. I hope that some day you will understand the true value of each person and the power of community. However, I hope I never meet you.

And who's to say we haven't discovered Rush's true value? Too bad it's a negative number.

I am sure God will welcome you. I hope you have accepted Jesus as your Savior.

So God has revealed to you who will be in Heaven and who will be condemned to an eternity in Hell. Your relationship with God must be amazing. Are you sitting at the right hand of God with his Don at your feet? See you at Mass on the morning.

As spoken by one traitorous MAGAT about another...


Great stuff, Tracy! Thanks! You're smart, plus,you're a doll! Mwah!

The Bibles explains EXACTLY who goes to heaven and hell. It list all the traits of the damned over and over. It gives examples, the rich man, the prideful man, the material man, the political man who ignores his end.

Its easy to use the Bible to tell who is going to hell. Thats one of its purposes - to warn people they are sinners and not to be deceived.

Read the Beatitudes. Explains who will go to heaven.

Its all very simple.

^^^^And yet you're assuming the Bible has any validity and that there is a heaven and a hell. Weird!

the world was flat back then wasn't it?

Shitting on dumb commies, you mean?

Nope. Hell is reserved for all those commies who want to build paradise with other people's money.

Finally giving your Mom a break.

Only black people and Democrats are racist. Everybody else doesn't give a shit.

That’s what the cover from thirty years ago said

Well all the guys in fox holes say there is a heaven and hell. If there isn't then you basically are on the edge of never existing (once you die).

But you exist right now. Weird isnt it? How existance comes from "nothing" in your mind. Or maybe it was the mud in the backyard or the rock that you came from?

Read the 2nd law of thermodynamics.

And yet you're assuming "laws" originated by man to explain the body also apply to the soul, which may or may not exist. Weird.

How many of you idiot libs spewing hatred about Rush ever listened, really listened to his radio show? None, I'll bet.

You could say that Goebbels reinvigorate propaganda too... but at what cost?