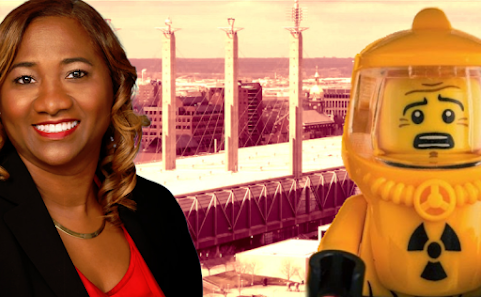 Kansas City now confronts more than a $70-MILLION budget shortfall with no help from the federal government coming any time soon. Threat of municipal bankruptcy is very real as 12th & Oak victims of furloughs and RIFs will attest.

COUNCIL DOESN'T KNOW HOW THE MAYOR PLANS TO PAY FOR ABOUT HALF A MILLION BUCKS TO HOST THE HOMELESS INSIDE BARTLE HALL - KANSAS CITY CONVENTION CENTER!!!

First and foremost, it helps to get a look at the bill that seems like it was sketched out on the back of a cocktail napkin.

Take a look at the document courtesy of our KICK-ASS blog community . . . 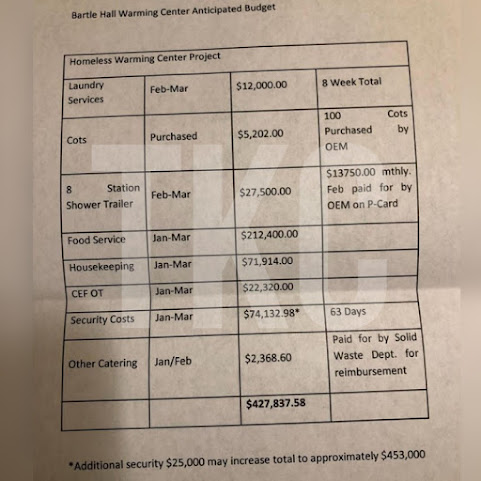 A few things worth mentioning . . .

Security skyrocketing to about $100K deserves attention because there's an important dispute on this controversial topic.

Officially, Mayor Quinton Lucas won't even acknowledge the presence of the Revolutionary Black Panthers on site.

Mayor Lucas retreats into legalese and rightfully acknowledges that only licensed security can operate inside city buildings HOWEVER he refuses to comment on statements regarding the anti-cop group who organizers claimed provided "protection" for the facility. The approach the mayor is taking is cowardly politic and attempts to solve a very real problem & community concern with wordplay instead of clear communication with constituents.

Here's the word as we don't want to seem unsavory by asking tough questions but the fast & loose handling of taxpayer cash inspires us to dig into this situation . . .

"Look at the last budget item marked "catering" for around $2,300. That was a reimbursement to Fifth District Councilwoman Ryana Parks-Shaw paid for by the "Solid Waste Dept.""

Councilwoman Parks-Shaw said she went to the warming center Saturday and discovered there was no plan in place to feed people, so she funded meals out of her own pocket to the tune of $2,300, for which she will be reimbursed.

"Councilwoman Parks-Shaw stated in the business session that the catering charge under solid waste was her reimbursement and if anyone had a problem with it they could talk to her!"

Her forthright testimony in praise of her own good deeds is commendable . . . However, it's worth noting that most people seeking reimbursement from city hall have to wait about a month to get their money back. 12th & Oak is typically pretty slow when it comes to payouts.

"Who authorized the expenditure in the first place and why would the Solid Waste Services pay for it!??  I guess there are no rules anymore."

"I guess I'll go take my car bill down to Public Works to get reimbursed."

We can save that AWESOME READER a trip . . . A quick conversation with Council Member Parks-Shaw might also be helpful given that her husband runs that department following a recent promotion that will help the city manager to build a more inclusive and supportive culture and reduce systemic racism within city operations.

The vice president will pay for it.

Put it on his 1.9 trillion dollar tab.

Funny but she paid for some pretty great grub. I guess it's okay that homeless are eating better food than most of the people living around city hall can afford.

I don't like this. Parks-Shaw was trying to do a good thing. Why castigate her for it. We need more people who are willing to step up and help out.

Um. If she really wanted to help out. She could not take the reimbursement or give it back.

Why am I paying to do the laundry of the homeless?


How the racist mayor is going to pay for this is his problem but these people can't be left out in the cold or heat. So he better find a way. We know those tax dollars aren't going into the streets or sidewalks so let him figure it out.

Nothing to see here!
The inmates are continuing to run the asylum.
At taxpayer expense.
Carry on and did deep KCMO residents.
You really can't make this stuff up!

With that kind of or precedent you could go buy them anything and have the city pay you back.

Why not buy them houses? Makes about as much sense.

You can't be charitable with other people's money! If she wants to feed the homeless, good for her. But if she's going to use taxpayer money, then she deserves no credit for it.


gotta be the worst job in the world..doing the laundry for the homeless..gross!

they out to set up wash tubs and clothes lines..and make the bums put down the crack pipe and do their own..

If you watch the news, you will notice that solid waste employees were helping setup the cots. This is the same department that doesn't have enough people to pickup the trash.


Start the federal investigation into this crap!

And the mayor should be recalled....just sayin!

Vote NO on the earnings tax.

It is listed under solid waste because that is all these people do - turn food into shit. How about a program to get them a job doing something? How about some hygiene classes, nutrition classes, or financial management? Or just feed and house them without providing any life skills. Gov't at it's finest.

Completely hilarious. The best part is the light the whole farce sheds not just on the incompetent stooge Mayor McDrinkerson, but the corrupt shenanigans of the whole Clowncil.

The very expensive Joke on Oak. Recall now, and then start a federal investigation.

Liberals are so stupid.

The feds are covering up the epstiens island because of the list that includes presidents,princes,and elites of all types.

I heard politicians from both parties and media moguls.

4:04, yes I believe her husband was head of the solid waste division. Lately as I recall he got promoted to the head of the department, the first non-engineer to hold that position in decades, if not ever. So now the husband can cover the wife's dumb expenses out of city funds, and use city employees like so many personal servants, and nobody will say a word about it.

So this is how new City Manager Platt is going to placate the black city council critters who voted against him and raised a stink when one of their own was not chosen: look the other way.

Parks-Shaw attempted to take credit for doing something good with other people's money. In other words, typical Democrat. As usual, KC is playing fast and loose with the books and spending money they they don't have and can't possibly raise.

Ins't it about time for an audit of Kansas City?

Whatever! Just don't cut back on bike lanes and BLM street painting.

I certainly hope a Cabal of baby eating politicians and supreme court judges dont look at this warming center as a "food pantry" for their demented diets. We have enough problems without these people eating our good citizens for dinner! And they may try to invite Hugo Chavez and George Soros for dessert! Please keep our citizens safe!

DO NOT RENEW THE E-TAX!!!!! IF YOU HAPPEN TO BE CONSERVATIVE, WHITE, OR LIVE
OUTSIDE DOWNTOWN, THOSE DOLLARS GO TO DOWNTOWN INTERESTS, ADMINISTRATION INSIDERS, PEOPLE AND GROUPS WHO HATE YOU. YOU ARE FINANCING YOUR OWN DOWNFALL IF YOU VOTE YES.

It will all be over soon. The Gibsmedats will burn the city to the ground when the freebies run out.

"Born to a white mother and Black father, Mahomes" ....

There are one or two comments here for people who are in the know. The rest are shite. Delete them.

Agree with the audit comments. They're the only thing that makes sense here.

Meanwhile in Tampa. The mayor is working hard on solving the crime problem, right?