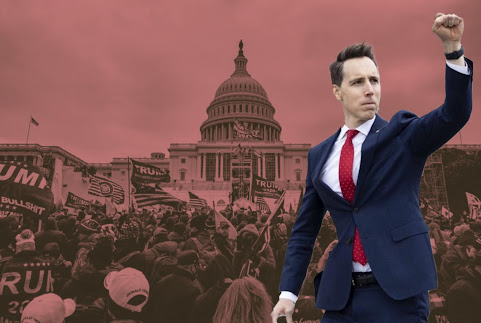 The MAGA NEXTGEN politico isn't backing down from criticism that connects him to the Capitol insurrection and there's no reason he should given that he's just coming off his best fundraising month EVAR.

A local connection tonight . . . A Kansas City interview asks him to explain his position and the upstart Missouri leader offers a perspective that cable news talkers mostly ignore.

Missouri Sen. Josh Hawley gave his first interview with a Missouri television reporter after the riot at the U.S. Capitol last month.

Hawley's objection to Joe Biden's Electoral College victory is important. He was the first because without a senator joining any House objections they could not go forward.

His objection was to a 2019 law permitting mail-in voting in Pennsylvania.

"The law is called Act 77, Mike, and you're right, the basic facts are that the Pennsylvania constitution has never permitted universal mail-in balloting," Hawley said.

Thank you Senator Hawley for fighting for free and honest elections.

The Libtards are destroying the oil and gas industry, leaving tens of thousands of its workers without jobs or ways to provide for themselves and their families. There are not solar/wind jobs waiting for them. During a pandemic, consumers will be paying a lot more for gas to run their cars and heat their homes. The Demoncraps are rapidly destroying the robust economy and job growth for people of all races that Trump created. Can't wait to pay $5/gallon for gas. And food prices go up in tandem with fuel prices.

TOP PHOTO -- JOSHING AROUND ON THE WAY TO THE OVAL OFFICE

Democrats are destroying the country by fomenting civil war.

Anyone that really knows Josh as a friend or associate will hope he stays in politics. We dont want him in the real world with us. He would make everything a huge confrontation. He can never simply agree with someone. Most "know it alls" are like that. He really should have been a computer programmer that you sit in a corner away from everyone else

Senator Hawley is right.. they cheated. Biden said they put togetger extensive voter fraud scheme. So easy to figure out.

THE big 3 banks gave mortgage loans to folks who controlled election boards as a bribe that is a gift with no repayment allegedly.

Its rampant in even states that flipped asap for Biden like colorado, d.c. and michigan.

Hawley is onto this. Besides word getting around that biden under power of attorney since 2014.

Hope they don't get to used to the eggs benedict...including harris. God knows they didn't win fair.

Angels encamped around hawley and the people of God in jesus name wisdom and and Gods justice and discernment.

Dude is a traitor. He will not be reelected.

Trump lost. Looking forward to him being impeached as well.

When historians define the single most telling factor enabling the American decline,

MAIL IN VOTING combined with a corrupt media will be the culprit.

A democracy cannot be sustained with an uninformed/misinformed populace.

The three major news networks (their owners) have been instrumental in America's destruction.

Meanwhile pelosi and others continue getting filthy rich off insider trading...purchased Amazon just before calling for lockdowns, tesla just before law requiring federal vehicles be electric.

Did the msm report this.

How do politicians get so wealthy?


The election was a fraud and everyone saw it. They hated Trump so bad they went overboard to get him out. But hey everyone can go do what that moron Kamala said to do and go step on some landmines. What a flipping illiterate bitch.

Joe Biden has put tons of Indians out of work now too. Seems to me it's safe to say he is racist against Indians. He's even pissed off Canada but he will suck up to Iran because Mr ISIS Obama has told him to. You democrats are so stupid and job killers too.

Why didn't he object to the Missouri votes? We changed our laws to allow for mail in ballots just like Pennsylvania did.

Glad to see we have one honest United States Senator in Josh Hawley who is looking out for every day Americans against Big Tech and the elites.

Biden is a corrupt puppet and an illegal President who needs 25,000 machine gun toting soldiers and miles of razor wire to protect him and the other Marxist Democrats after their coup.

We only like Russia conspiracies here, all others need not apply.

Big Tech and the Mainstream Media newspapers, tv networks, and cable channels are working for your country by suppressing your “far-right” misinformation and conspiracy theories. And it is working for you by not allowing your hate speech to see the light of day or screen, and thereby protecting you from incriminating yourself. Otherwise, measures would have to be taken against you. Social justice mobs, I mean “people’s juries,” might have to show up at your home or place of work in order to peacefully demonstrate through breaking windows, spray-painting slogans, throwing Molotov cocktails, or otherwise burning the place down, and/or looting where appropriate. Online campaigns would have to be mobilized to berate your wife and children, scare your employer into firing you, and label you as, you know, a “racist,” “white nationalist,” and “male supremacist,” as well as a “transphobe” and “Islamophobe.”

“Free speech” is the irresponsible policy of dead white slave owners, so no good can come from it. That so-called “First Amendment” that “far-rightists” and “free-speech absolutists” keep mentioning is a dead letter, thank goodness. We, the woke enlightened, know that wrong speech is violence and must be suppressed, by violence if necessary. Woke university students have become experts at meeting “speech violence” with physical violence, showing those “white nationalist” Republicans, classic liberals, and libertarians that their “speech violence” won’t be tolerated.

Do not dare to say anything unflattering about the Democrat Party or Democrat candidates. Now that Big Tech, Big Media, Big Finance, and Big Education all have unified with the Democrat National Committee, any words contrary to their interests are forbidden. The dastardly reporters exposing the dirty deeds of the Biden crime family violated these injunctions, as did those citizens who tried to share the information, and had to be silenced by Big Tech and ignored by Big Media. The Deep State pitched in through a letter from fifty high-level retired security officers, proclaiming that the news about Biden influence-peddling was just Russian disinformation. This ignored the fact that federal investigations of Biden family members were in process. So voters never got to hear the ugly detail about billions flowing from America’s greatest adversary into Biden pockets, and Biden was (perhaps) elected.

Nor can anything unflattering be said about the Democrat Party militia of Black Lives Matter and antifa. We must appreciate their “peaceful protests” for racial justice that featured rioting, looting, arson, attacks on police, assault, and murder. Never under any circumstances say “all lives matter” or “blue lives matter,” for these are racist statements and you are exposing yourselves as extremists. “Inclusion,” famous among the three principles of justice, “diversity, equity, and inclusion,” means only “black lives matter.” What does not matter is that most blacks who lose their lives through violence lose them to black criminals, and it is racist hate speech to mention black-on-black crime. It is racist to object to defunding the police, although most black Americans do not want to defund the police and want to avoid the consequent spike in violence.

Saying that whites are privileged, racist, and fragile, that whiteness is a corrupting influence that leads to politeness, promptness, diligence, and postponement of gratification, that the entire society is characterized by “systemic racism” in which whites oppress and exploit blacks, and that “white lives do not matter” is not hate speech, but the “true” findings of critical racism, I mean critical race theory. But saying that you prefer “color-blind” recruitment for universities and jobs is racist hate speech, as is advocating merit rather than race-based recruitment and reward. Only white supremacists want color-blind and merit-based treatment.

Do not mention those sexist terms “mother and father,” “sister and brother,” and “son and daughter,” because recognizing differences means sexist discrimination. Nancy Pelosi changed House Rules to exclude these “sexist” terms, to “cancel” American kinship terminology, and to deny differences between males and females. So mind your tongue! Never mind that males and females are genetically, physiologically, neurologically, and psychologically different, the Democrat “party of science” denies the best known biological human difference. Continuing in the denial of science, President Biden has made a royal proclamation claiming that men can be women and that women can be men, and that they must, by law, be treated as such! The Democrats have joined the non-binary sex crowd, demanding that the 0.00001% of sexual anomalies be regarded as definitive of sex, and that everyone must bow to the tiny minority of people who imagine themselves to be the sex other than that that their genetics dictate. So you had better call people by whatever label they imagine themselves to be, and only use the pronouns that they demand, otherwise it will be a fine or jail time for you. If you object to boys who say they are girls dominating female sports, do not say so out loud, or be prepared to be banned from social media and probably fired for “transphobic” hate speech.

Whaaa!!! The election was stolen!!! Sure it's a lie, but whaaaa!!!! Not fair!!!! I mean Pennsylvania changed that law a year ago , and I could've raised an objection then, but I didn't!!! Whaaaa!!! Not fair if we can't overturn the will of the American people!!! Whaaa!!! Why is everybody against us!!! Whaaa!!!!!

"The law is called Act 77, Mike, and you're right, the basic facts are that the Pennsylvania constitution has never permitted universal mail-in balloting," (Josh Hawley)

The problem with that statement is that the Constitution of the State of Pennsylvania, Article Vii, Section 14, DOES NOT PROHIBIT UNIVERSAL MAIL-IN VOTING, it only requires the State Legislature to provide for such a method of voting! (Available on-line, read it for yourself.)

So once again Hawley distorts reality to suit his political ambitions.
I'm guessing, from that statement, that in Josh's preferred World everything not specifically permitted is banned, which is the exact opposite of that silly little thing we call Democracy.

^^^Have a banana, Chimpy. It's hard to screech and chitter when you're eating a banana.

^^Shhhh. Your master is working chimpy-lover. Your job is to sit silently and wait for his posts. He owns you, never forget that!

but they were also challenging personally cast ballots, not just mail in ballots.

in one wisconsin case the trump challengers wanted to throw out over a hundred thousand of advance voters who showed up to vote but had some law discrepancy in the questions they answered or some technicality. the court denied the request to throw out those thousands and thousands of actually cast in person ballots.