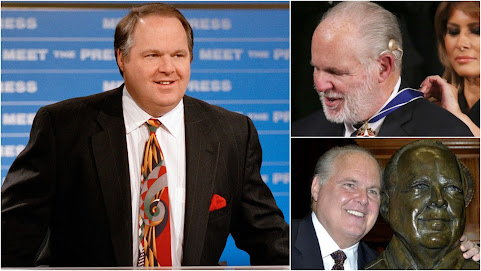 Tribute to Mr. Limbaugh stands in the Missouri Hall of Fame, inside the grand rotunda of the state capitol in Jefferson City.

DESPITE POTENTIAL PROGRESSIVE OUTCRY, MISSOURI WILL WILL SOON DEDICATE THE 1ST 'RUSH LIMBAUGH DAY' IN THE NATION!!!

Deets on the legislation that already has many willing co-sponsors lined up and will likely pass without any real resistance:

Limbaugh, born in Cape Girardeau, died after a battle with lung cancer at the age of 70. Limbaugh's radio show aired on more than 600 stations with up to 27 million people listening weekly.

“Rush Limbaugh’s contributions to broadcasting and the conservative movement cannot be overstated. He was, simply put, a legend who cannot be replaced,” Rep. Billington, said. “This is one way we can recognize the outstanding impact Rush Limbaugh has had on our state and country.”

Will we get a free steak?

Anonymous said…
I say have the biggest giantist hugest party in kc to piss off all the whiny crybaby libtards! after all, he did work in kc for a number of years!
2/19/21, 3:56 PM

We are almost at 500K just since he passed. Show your support for The Life of Rush and donate today!

Anonymous said…
Yes! Exhibit both your clueless hatred of a dead man and your love of murdered children!
2/19/21, 4:34 PM

Anonymous said…
The State House MAGA's will introduce a bill Monday which eliminates MLK Day and adds Rush Limbaugh day. It is expected this bill will garner 100% support from the Republicans.
2/19/21, 5:15 PM

Anonymous said…
Who would even celebrate such a day? Missouri sickness continues. Nobody thinks Missourian are sane. Have you seen The Act on Hulu? It's about a crazy, unhealthy Missouri woman and her daughter. Based on a true story.
2/19/21, 5:21 PM

The day you're encouraged to gorge to obesity, take up smoking, divorce your wife and remarry a younger woman, abuse painkillers, and then when you get called out, claim that you're deaf and plead for sympathy!
2/19/21, 6:03 PM

Anonymous said…
Man. Hate to hear what Bill Clinton Day would be. Or Joe Biden. Or Vice-president suck-suck.

Reality Speaker said…
Love Missouri. If you don't like it progs, leave.

They just cannot stand to have a little slice of good America left.

Anonymous said…
Liberals hope and strive for a Better World that will never be.
Conservatives pine for the restoration of a Glorious Past that never was.
2/19/21, 6:48 PM

Anonymous said…
Limbaugh was a cancer on our political discourse and society for decades.

Anonymous said…
Why aren't all you Conservatives concerned that this is what your representative, salary paid with your taxes, is doing with his time when we have a pandemic, the lowest vaccination rate in the nation, rolling blackouts, etc., etc., etc. Squawk! Fiscal conservatives! Small government! You are such hypocrites.
2/20/21, 7:21 AM