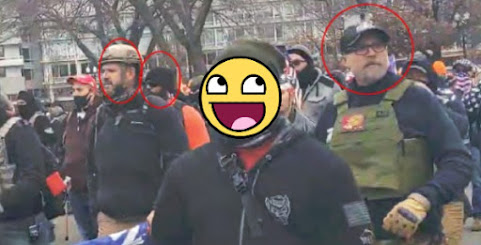 The crackdown on alleged white supremacist "proud boys" reached Kansas City today and local media dutifully regurgitated most of their information sent their way by the feds.

Here are the basics and a quicker roundup than what cowtown MSM is feeding the public today:

According to the Kansas City Division of the FBI, three local men have been charged in connection with the violence that occurred at the U.S. Capitol on January 6th.

The FBI said the three men were arrested this morning by the FBI's Joint Terrorism Task Force.

William Norman Chrestman and Christopher Charles Kuehn, both of Olathe, and Louis Enrique Colon, of Blue Springs, all face a slew of federal charges connected to the riots after being arrested Thursday by the FBI.

According to court documents, the group, who identified themselves by wearing orange tape marks on their clothing, worked together to storm the Capitol.

Federal investigators used social media and cell phone tracking to place the subjects at or near the Capitol on Jan. 6.

Don't get it twisted, our TKC blog community shouldn't have any love for these dudes who look like former high school bullies gone horribly, horribly wrong and frustrated with their box store careers.

We should note context.

What we've learned: The argument here is that rioting at the Capitol is much more important than rioting in the Summer of 2020 that took place across the nation and amid an iconic local entertainment district. In reality that's probably correct but also, sadly, confirms for us that elected officials are far better protected then the plebs.

To put it more bluntly, in the manner of bawdy Catholic school young ladies from my youth who kindly persist in my memories:

Cynics might claim that we haven't heard anything about people charged in Kansas City Country Club Plaza "mostly peaceful" riots that cost millions worth of damage and injured dozens of cops. 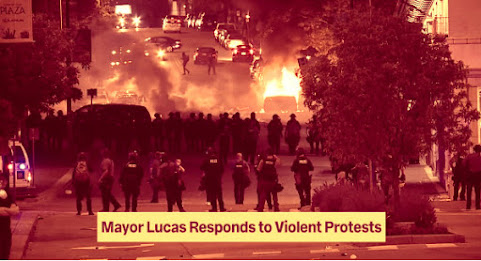 But that's not accurate.

Many leaders of the Kansas City riots have now been celebrated by our local political elite and some are even high ranking civic "activists" who have earned accolades for their bravery and lucrative donations for their associations.

Meanwhile, a sense of civic pride inspires us to conclude with this contradictory note . . .

For many this distinction might not matter but as a denizen of Midtown it's important if only to accurately report that the alleged political thuggery hasn't really taken hold in this cowtown and is a better representation of the political discourse in Nowheresville, U.S.A.

Hey man, that dude sold me the wrong battery at Auto Zone too.

Um, I believe that our President Biden has renamed them Poor Boys.

Glad they got them.

I’m waiting to see what they actually did, I’ve heard nothing that says anything other than they were there.... big deal, at least they didn’t burn cities down, hurt or kill people or demand free money.

Nothing more than the despicable dimwit party dirty politics.

^^^ One of them threatened to shoot a cop and interfered with an arrest.

They're lucky if jail time is all they get.

If they'd gone in blackface Biden would be giving them a medal.

When LARPing gets real.


Get over yourselves democrats You people burnt entire cities down and then praised your cohorts for it. You ass holes are now saying trump gave a sign for the oath keepers to go in and riot. NOT TRUE TRUMP wasn't even there. Kamala Harris is the one who said for ANTIFA to keep doing what they were doing. You people are terrorists and this is going to blow up BIG!

You're darned tootin' I'd be giving those boys a medal! It would have been a great accomplishment for the darkies. They aren't like ol Corn Pop. Did I ever tell you about the time I beat his ass?

Selective persecution. The entire 2020 was full of deadly riots with arson. Not only did the democrats dismiss the lawlessness calling them peaceful protest but our new Vp set up bail funds for these left wing foot soilders. But let them be on the other side of the political spectrum protesting a rigged election and these people can be identified and prosecuted. Equal justice? Not even close. These are gestapho tactics. When 5 cops were shot in Dallas did Obama face inpeachment for inciting cop hate? When Michal Browns tribe turned Furguson into a inferno did Eric Holder get held responsible? Democrats are evil double standard nazis.

Told you MAGATS. We’re coming for everyone of you seditious, traitorous cockroaches one at a time. Go Law Enforcement! Go KC Police!

3 MAGATS down and going away for a long, long time. Who’s gonna cook the French fries at the Olathe McDonalds now?

They were armed in case they had to fight the BLM / Antifa Karencrats.

Hahahahahahahahahahaha! Bunch of MAGAT pussies that could only whimper when being arrested. “Tough” Proud Boys, indeed. How many additional TKC MAGATS will join them in Federal prison and financial ruin? Step up, MAGATS! Look at the cowards now!

These people are so fucking stupid, in this day and age there is a camera on literally EVERYTHING. What were they thinking? Dumbasses

Three down; many more to go! Report any and all suspicious MAGAT activity to the FBI: 816.512.8200. You may save a law enforcement officers life. God bless the USA!

^^I just reported you.

House Speaker Nancy Pelosi has gone on record praising the storming of the Capitol as an “impressive show of democracy in action” — the 2011 invasion of the Madison, Wis., state capitol, that is.
Pelosi’s previous comment’s resurfaced following the disturbing assault on the U.S. Capitol earlier this month at the hands of a right wing-mob who stormed the halls of Congress hoping to prevent the certification of the U.S. presidential election.
The assault drew forceful condemnations from both sides of the political aisle — including Pelosi — who wasted little time introducing former President Trump’s second impeachment in the House for “inciting” the violence.

Ten years earlier, unionists stormed the Wisconsin State Capitol in an attempt to block a vote on collective bargaining reform. Thousands of demonstrators managed to enter the building by violently breaking down doors and shattering windows — but the attack garnered much praise from Pelosi and other prominent Democrats at the time.
The occupiers were praised publically by Pelosi for their “impressive show of democracy in action.” The House Speaker took to Twitter to express her “solidarity” with the activists as they attacked the Capitol, and sent senators into hiding until police managed to remove them from the building.
Fox News contributor Mark Thiessen highlighted Pelosi’s previous remarks in a column for the Washington Post earlier this month, oberving that “in other words, Democrats were for occupying capitols before they were against it.”

Ah how the mighty chucklowes have fallen


soo..how about the cowardly Capitol Policeman who shot a female 35 decorated Veteran in her neck, and murdered her...

Has anybody heard from chuck lately?!?! Glad I called him him to the FBI. Job well done FBI!!!!

"Get over yourselves democrats You people burnt entire cities down and then praised your cohorts for it."

5:40 (#1): Would you please provide a list of the "entire cities" Democrats burned down? Inquiring minds want to know!

These guys will squeal and roll on literally every person in the metro that has something to do with this. Should be plenty more arrests. Literally every fbi field office is coming down on these clowns and the threat of federal sedition and treason charges will get them begging for a plea deal.

Likely there will be many arrests in kc. Lovely.

Minneapolis burned to the ground

“was arrested on federal charges of: Conspiracy, Civil Disorder, Obstruction of an Official Proceeding, Threatening to assault a Federal Law Enforcement Officer, Knowingly Entering or Remaining in any Restricted Building or Grounds Without Lawful Authority and Disorderly Conduct on Capitol Grounds.”

So somewhere in your sick twisted demented brain washed pea sized brain you managed to lie about a gun, idiot


up until the Obummer/Bidet administration..the FBI was a proud, noble profession..

Olathe is full of racists. People who live there and claim to not know that... I call bullshit

I hope these terrorists are treated the same way that Osama Bin Laden's crew.

Send them to the prison in Cuba for 20 years. Then see if they appreciate the freedom we have right now under Biden. We do have freedom now.

Remind me again when BLM tried to assassinate the Vice President? If any of you morons would actually look at all the video evidence showing how close the insurrectionists were to Pence, the nuclear codes and Romney instead of your endless whataboutisms you might learn something. Breaking a window at an Old Navy is not the same as trying to obstruct democratic processes and attempted assassination. Your refusal to acknowledge that and instead support murderers like Kyle Rittenhouse shows that you don't actually care about facts but instead your motivation for all your positions is white supremacy. Obviously some of you are willing to explicitly announce that with every post, but those of you who try to keep up the pretense that you actually give a shit about democracy with your endless "oooh demoncrats hate America" are really fucking obvious because your points have no logical or coherent basis.

Rittenhouse did society a favor by eliminating these Democrat Party scum.

I read where these magats all have financial trouble in their past, along with domestic arrests and other petty crimes. Just like the dear leader, you know the former social media poster, they are criminals.

What seems to be missing is any allegations of violent or property crimes. Good think the ‘anti-terrorism task force’ got involved to save us from these politically incorrect men.

You are so right...but those are a common cross section of todays dim0crat party.

Facts? Show me 1 elected that got hurt. It was bs anyways. If this was a REAL insurrection congress would have not re convine in that building. Anyone who knows anything about counter insurgency knows you cant rush in and occupy a space where your enemy was just in. To many risk. This entire thing was as PHONEY as the Steele Dossier that was bought from fusion gps to falsely inpeach the president the first time.
You are gulible. Wanna buy a car? I got a real nice low milage...