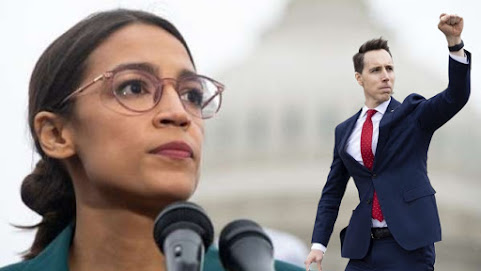 He has endured insults from AOC and just about every progressive pundit in the nation. Pay cable comedians even crassly labeled him a douche-bag. But now Missouri Senator Josh Hawley is laughing all the way to bank.

To wit and because TKC has been consistently saying that his newfound notoriety has only helped his career . . .

THERE'S NO SUCH THING AS BAD PRESS!!! MISSOURI SENATOR HAWLEY CAPITALIZED ON WIDESPREAD HATERATION AGAINST HIS ELECTION CHALLENGES EVEN AMID OUTCRY OVER AN ALLEGED CONNECTION TO THE CAPITOL INSURRECTION!!!

Actually, chest thumping over big money is more important than his controversial gesture that hack pundits claimed would follow him forever.

His EPIC money win reveals a populist endorsement of his politics along with his obvious desire to take the national stage rather than work on boring Show-Me state issues like our broken roads, crumbling infrastructure, ruined healthcare system, ongoing opioid crisis along with statewide education in shambles despite years of Republican rule.

January was Sen. Josh Hawley's best fundraising month—by far—since his 2018 election, with a flood of small-dollar donations more than eclipsing the corporate cash he lost after leading an effort to block certification of President Biden's Electoral College win.

Why it matters: Corporate PACs cut ties with the Missouri Republican after the Capitol insurrection that followed the Hawley-led gambit. But his grassroots fundraising bonanza in the weeks after shows the GOP base still firmly in Hawley's camp.

Anonymous said…
And yet, he's well on his way to being reelected. And now unencumbered by corporate interests like his Democratic Party critics. Weird.
2/2/21, 12:01 PM

Anonymous said…
This was always a given. What people believe, and what the media tells you they believe, are usually entirely different things.

Missouri is a Trump state. Hawley was one of the top Trump supporters (or apologists, depending upon your tribal affiliation). His base in this state was strong before Jan 6. Thanks in large part to the media trying to slam him, public, it's now massive.

Anonymous said…
Keep trying Democrats! You are to stupid to realize that the more you try to shut people down you just create more demand but then you never have understood supply an demand in the first place.
2/2/21, 12:13 PM

Anonymous said…
The Libtards are happy to be destroying the strong economy and job growth that Trump built before COVID hit. Shutting down the pipeline so the gas and oil can be transported on smoke-spewing trains and semi-trucks at higher cost to consumers is not the mark of brilliance. It's going to also raise food costs for everyone. It costs more to transport food because of the Libtard idiots.
2/2/21, 12:22 PM

Anonymous said…
Four years from now the Democrats will still be pissing and moaning about the same shit they have for decades. It's going to all fall down around them and they will have no one to blame but themselves. God has a sense of humor LOL
2/2/21, 12:27 PM

Anonymous said…
"there will be blood in the streets” - Loretta Lynch

“Who says protests have to be peaceful “ - Chris Cuomo

“There needs to be unrest in the streets” - Ayanna Pressley

“Protesters should not give up” - Kamala Harris

“You get out and create a crowd and you push back on them, tell them they are not welcome “ Maxine W”

"People Do What They Do" - Nancy Pelosi

Unknown said…
Josh keep going and pushing. We will back you. Thank you for your stand. If you come to Poplar bluff I hope to see you
2/2/21, 2:05 PM

Anonymous said…
So much easier to be a Democrat. Your only grassroots supporter is Tom Steyer, and to get campaign cash you just phone his assistant and ask for a couple mil.
2/2/21, 2:16 PM

Anonymous said…
Is AOC still babbling about her delusional encounter with a capitol police officer? What a loon.
2/2/21, 2:42 PM

Anonymous said…
Aoc is now blaming her reaction to the capitol riots as an excuse for her bad behavior towards republicans, she’s been told to apologize and refuses so she came up with the excuse that’s she’s a survivor of a sexual assault.

The sad part is the lame stream media and her followers will run with it and quote it as gospel, she has no problems lying about anything to cover her stupidity.
2/2/21, 3:27 PM

Anonymous said…
1:09 you left out the let’s walk down Pennsylvania Ave. peacefully and patriotically part, did cnn cut that part out again so you wouldn’t know the whole truth of his speech?

Being a Chinese news network supporter is making you dumber and dumber everyday.
2/2/21, 3:32 PM

Anonymous said…
Christian American Whites are finally banding together recognizing the Marxist Democrat Party hates us. This could work out best in the long run as white heterosexuals are seeing the need to organize and unite.