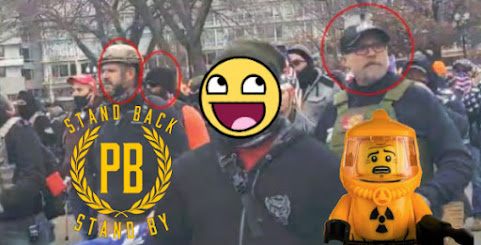 Here's the online description of a group that's stepping up their profile locally . . .

The Proud Boys is a far-right, neo-fascist, and male-only white nationalist organization that promotes and engages in political violence in the United States and Canada.[

A local chapter of the Proud Boys actively “recruited,” organized and conspired to commit federal crimes as a part of the Capitol riot, according to a criminal complaint filed by the Federal Bureau of Investigation.

The document, detailing the circumstances leading to a Gardner man’s federal charges, outlines one instance of recent activity by the militant activist group spanning multiple states. It confirms suspicions experts told FOX4: that Kansas City has a growing chapter of Proud Boys.

However, for both better and worse . . .

Let's not forget that cowtown recruitment and popularity TYPICALLY translates into the decline of any trend.

Translation: Kansas City Proud Boys are already out of style and trendsetters are probably moving on to the next big thing.

Making friends can be hard for some people.

Um. You would likely know about that one. Dude.

Filthy white MAGATS. Lock them all up!

Contact the FBI to report any and all suspicious MAGAT activity: 816.512.8200. MAGATS should always be considered armed and dangerous. Do not approach. Let law enforcement handle the situation.

I like how one of the leaders was an FBI informant and is squealing like a runt pig. Loyalty, we don't need no loyalty. They never listened to Groucho never join a group that would have the likes of you as a member. Think of it, they trusted other scum bags to have their backs, they were just as bright as the former social media poster.

blm is recruiting too. Pick your hate group.

^We choose to belong to the Bandit hate group and we are legion.

Contact the FBI to report any and all suspicious LIB activity: 816.512.8200. LIBS should always be considered armed and dangerous. Do not approach. Let law enforcement handle the situation.

^^nah, we'll keep arresting though. How about that traitor?

All of those MAGA rallies. Trump used these folks to further his cause and then walked away from them. These folks will spend many years in jail.
This blows a huge hole in the Republican Party.
Stay with Trump and his brand of propaganda based politics? This may or may not work as Donald may find himself in jail also.

“The Proud Boys is a far-right, neo-fascist, and male-only white nationalist organization that promotes and engages in political violence in the United States and Canada.”

And yet their leader is Puerto Rican and they have black members as well, more fake news to keep the ignorant and uneducated like 12:49 in line with the false dimwit narrative. Lying, cheating, burning down cities, shutting down businesses and schools and their favorite thing to do is killing innocent people. Go dimwits! Yay!

Total Reichstag Fire horseshit "Narrative" promulgated by the Fascists/D﻿﻿﻿﻿﻿﻿卐﻿﻿﻿﻿﻿﻿M﻿﻿﻿﻿﻿﻿☭﻿﻿﻿﻿﻿﻿CRAT﻿﻿﻿Deep State/4th Estate liars in their quest to retrain the guns away from actual terrorists and onto the newly defined "Domestic" terrorists/"Insurrectionists" (That's you Trump voter!).

What fuckin liars. This from Steve McCann a writer who was actually AT the Capital on January 6th and has taken the time to dig into facts and the reality of what really happened.

"Since the initial reporting, the truth has slowly leaked out, primarily through the alternative media. We now know:

That the FBI and other agencies as well as Congressional leaders were aware prior to the riot that militant and extremist groups were planning to cause chaos and breach the Capitol. Thus, President Trump could not have incited the mayhem.

That no one was murdered by demonstrators, and Officer Sicknick was not killed by a Trump supporter with a fire extinguisher but died of natural causes or exposure to tear gas.

That three of the people supposedly murdered died of natural causes outside the Capitol building.

That there was no “armed insurrection” as no one has been charged with using a firearm inside the Capitol, further, no demonstrator has been identified as even carrying a gun inside the building.

That Congressional leaders, primarily Nancy Pelosi, deliberately tied the hands of the Capital Hill police and refused to call in additional police support or the National Guard.

But the initial story by the Gaslight Media set the narrative. And narratives, in due course, evolve into unquestioned and irrefutable facts if not immediately and aggressively questioned or refuted. Over the past five years, the examples of the Gaslight Media lies and manipulation in order to establish a false narrative as well as the failure of conservatives and Republicans to aggressively counter the narrative are legion."

Reichstag Fire lies from the scum bags in the media, supported by the Progressive/BLM/Fascists who are out running the streets (Having made bail thanks to the Biden/Harris campaign), still burning, looting and rioting while those white boys, held without bail (NO HABEAS CORUPUS FOR YOU WHITE BOY!!!) for misdemeanors.

The two tiered Justice system, run soup to nuts by Fascists in Washington D.C. has YOU in it's crosshairs for the sin, of NOT voting for Biden and NOTICING THE "IN YOUR FACE, FUCK YOU ELECTION FRAUD OF 2020.

Welcome to the Fascist States Of America.

Give it two years Chuck. Their implosion will be glorious. They will destroy themselves from within.

chuck is all full of shit again but does present a good read through.

i just thought that what happened in d.c. can't be blamed on racism - do we really hate the far left or the far right depending? down right pitiful or a great shame, take your pick.

Yes it's a great read for a mental health professional looking for delusional psychotics...hit the fucking jackpot.

Probably a prime target of the Proud Boys.

You can be certain the FBI is aware of all the chucklowes around here.

Geez, believing anything coming out of the FBI or DOJ is so passe.

Reminder - the FBI has not foiled a single plot that was not thought up by, instigated by, planned by, and funded by the FBI.

According to the (((msm))) and Democrat party the enemy of the USA (bolshevik globalism) are working,law abiding White families.

KC should be a great place for these clowns to recruit.
Of course, so should any other pitiful silly "organization" that tries to attract people who can't ever seem to actually accomplish much of anything.
KC is full of folks playing make-believe and doing everything they can to try to get attention for that self-important few minutes of "fame".
Now that all the breathless rah rah for BLM has faded, maybe "leaders" like Justis Horn, Stacy Shaw, and all the others can sign on to a whole new narrative.
Apparently, pretty much anything's better than disappearing into the fog of well-deserved obscurity.
Where's the local TV "reporting" crowd?
All the world's a stage!

"The Proud Boys is a far-right, neo-fascist, and male-only white nationalist organization"

The founder of the Proud Boys is Hispanic and has other Hispanic members. Their primary purpose was / is to protect the elderly from getting beat up by ANTIFA Brownshirts.

The Media turned the Proud Boys into the second coming of the German Wermacht and Luftwaffe with Tigertanks and artillery and Messerschmidts.

No one had heard of the Proud Boys until Prissy Chrissy Wallace mentioned them in the 1st Debate.

obscurity is a safer way of life - i prefer it that way.

When behind, the racist Democrats also pull out the race-baiting. They are obsessed with one's skin color instead of judging one on their own merits.

Chris Wallace is the lowest form of scum there is.

^ you are correct 1:59. Look at the police presence at a Chiefs game which is normally twice of what was in front of the Capitol building.

The whole thing was a set-up. No protesters were armed with guns as most walked around, took selfies and acted like tourists.

I do believe the protesters wanted to voice their displeasure with the 2020 election fraud with Pelosi and company.

No burning or looting. For some reason unarmed Alisha Babbit was executed by Pelosi's private security.

Racebaiters suck! Look_Filthy black MAGGOTS. Lock them all up. COMMENT NOT ONLY RACIST BUT LEARN HOW TO SPELL. MAGGOTS HAVE 2 "Gs" FOOL. Using black or white race for maggots is not cool.


FBI hasn't confirmed jack crap. Except the fact they tried and failed to cheat the election in 2016 but cheated again and won at cheating in 2020. The capitol riots was started by radical left ANTIFA and BLM.

^^and yet that's a lie and you have zero proof of it. Grow up. We aren't entertaining that bullshit anymore. You lost! Get over it. Fuck your feelings. Weird.

What was wrong with the Reichstag fire?
It was just like a bonfire before the big game.

Proud Boys are mostly divorced white men with no friends except their dog (and the dog only stays for the food). They believe a jewish satellite laser set the forest fires in Cali last year, That George Soros is keenly interested in Kansas City politics, that Hugo Chavez is alive, that the election was rigged, there is a cabal of baby eaters amoung the democrats and Trump is a messianic savior sent by God who will have a "storm" and arrest and publically execute the democrats and then - well everything in the whole world will be peachy!

What a bunch of LOSER! In the 1970's they would be placed in a sanitarium

It's all part of the reality show. Just pop some more popcorn.

January 6th was such a poorly planned insurrection that no one brought any weapons and most of the people who besieged the Capitol Building were old grannies. The Proud Boys themselves were run by an FBI informant. He wasn’t the only FBI informant involved in the pant raid gone awry either. Then of course, AntiFA and BLM had their people there to stir things up. But it is easy to demonize the Proud Boys so this all suits the narrative to cast all Trump supporters as dangerous though.