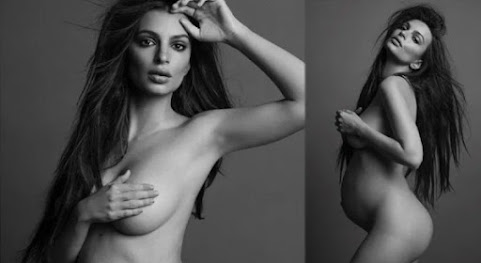 Right now we notice that hottie EmRata is sharing her pregnancy life in great detail and much to the delight of "journalists" around the world. And all of THAT inspires this fair use and educational glimpse at pop culture, community news and top headlines.

KCPD: 10 vehicles involved in crash at I-470 at 3-Trails Crossing

KANSAS CITY, Mo. - Veterans enrolled with the Department of Veterans Affairs have the opportunity to receive the COVID-19 vaccine. The Kansas City VA Medical Center announced Tuesday that it had 200 doses of the vaccine available. Interested veterans can visit the Honor Annex, 4251 Northern Avenue.

FAIRWAY, KS (KCTV) - During this cold snap, make sure to keep a close eye on your pet! Just because they have fur, doesn't necessarily mean they're protected. They can get hypothermia, frostbite, and even freeze to death in single digit temperatures. If brining your pet inside isn't an option, make sure they have shelter outside.

Emily Ratajkowski once again went fully nude to show off her pregnant baby belly at 33 weeks. The 29-year-old model shed all clothing in an artsy black and white snap posted onto Instagram early Monday morning.

EXCLUSIVE: More than 50 House Republicans on Tuesday warned President Biden of a brewing "crisis" of illegal migration at the southern border amid indications of a surge in numbers -- just as Biden has forged forward with a number of policies limiting border security and interior enforcement.

World Health Organization investigators said Tuesday that they would no longer pursue research into whether the coronavirus leaked from a lab in Wuhan, China. Peter Ben Embarek, a food safety and animal diseases expert, announced the decision during a press conference to wrap up a visit by an international team of WHO experts to the city where COVID-19 was first identified in December 2019.

President Biden on Tuesday said he supported a proposal from House Democrats that would send $1,400 stimulus checks to Americans earning up to $75,000 annually, rejecting a push from the party's centrist wing to dramatically curtail eligibility.

Texas lawyer trapped by cat filter on Zoom call, informs judge he is not a cat

A Texas lawyer accidentally left a kitten filter on during a video conference call with a judge and was unable to change it, eventually responding to a judge's query about why he was being addressed by a digital feline by saying: "I'm here live. I am not a cat."

KANSAS CITY, Mo. - Arctic cold continues to have a firm grip on the Kansas City metro and some people experiencing homelessness are braving the elements. Advocate Lindsey Anne said there are people still living outside and the individuals she helps complain they're wet and their biggest request is a need for items to stay warm.

Hide Transcript Show Transcript WE'LL STAY MOSTLY CLOUDY FOR MOST OF THE EVENING HOURS. HERE'S YOUR FORECAST. YOU STILL SEE THE IMPACT GRAPHICS, MINUS 1 AT FIVE. CLOSE TO ZERO AT SIX AND SEVEN. STILL IN AND OUT OF THE FLURRIES. ONE BELOW HEADING INTO EIGHT AND NINE TONIGHT.

If brining your pet inside isn't an option, why the hell do you have one?

Asked if she'd quit smoking marijuana during her pregnancy, Emily professed “An ounce of prevention is worth a pound of cure”!!!