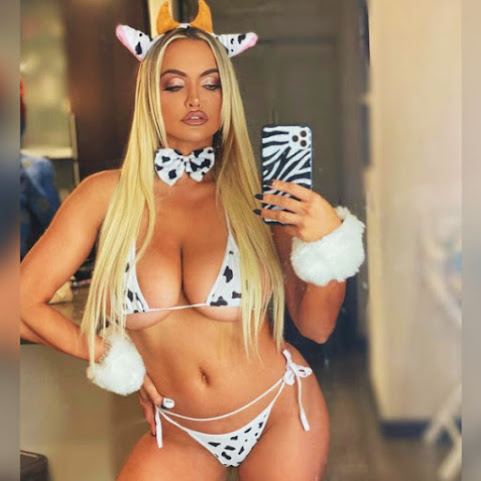 Right now we celebrate hottie Lindsey in a costume that speaks to our cowtown roots and pokes a bit of fun at her social media brand as we share pop culture, community news and top headlines.

After five days of snow removal, it's again all hands-on deck for Kansas City Public Works.

KANSAS CITY, Mo.- Outdoor workers must brave Kansas City's dangerously cold temperatures. Temperatures that will be staying in the area for the next week. "It feels like North Dakota, or South Dakota. The good gloves are no good, wool, no good," said traveler, Robert Evans.

KANSAS CITY, MO (KCTV) -- On the Missouri side of the metro alone, there were more than 200 wrecks in just the first half of the day Monday. MODOT and Kansas City Police said the frigid temperatures had a lot to do with that, and that cold won't let up to melt the snow for several days to come.

LINDSEY PELAS has declared war on Instagram for 'discriminating' against women. The former UFC ring girl called out the social media site after one of her busty selfies was removed. Pelas - who has natural 30HH boobs - has racked up more than 8.6million followers on her Instagram page.

WASHINGTON (AP) - The Senate launches Donald Trump's historic second impeachment trial on Tuesday, with lawyers for the former president insisting he is not guilty of inciting mob violence at the Capitol to overturn the election while prosecutors say he must be convicted of the "most grievous constitutional crime" even though he's gone from the White House.

While the House impeachment managers have focused on events leading up to the Capitol breach, it was the real time response from Donald Trump to the rioters which yields smoking gun evidence of his intent to incite the insurrection.

Senate Majority Whip Dick Durbin (D-Ill.) said in an interview that there was confusion about what the amendment did and lamented having only 60 seconds to debate it due to the rapid-fire pace of the votes.

The price of bitcoin surged above $47,000 on Tuesday, building on gains following news that electric-car maker Tesla has invested $1.5 billion in the cryptocurrency and may accept it as future payment for products. After reaching a record of near $44,000 on Monday, bitcoin prices hit $45,000, $46.000 and $47,000 later that evening, according to CoinDesk.

Kylie Jenner does Caitlyn Jenner's makeup for the first time

Beauty mogul Kylie Jenner is glamming up her dad. On Saturday, Caitlyn Jenner, 71, released a video on her YouTube channel of her youngest daughter doing her makeup for the first time ever. "This is the highlight of my life," Kylie told Caitlyn, welcoming her into the Kylie Cosmetics office - and, of course, using all of her own makeup products.

KANSAS CITY, Mo. - Getting on a bus usually means finally taking a load off, feeling comfort in knowing exactly where you're going. For people experiencing homelessness out in the cold, getting on a bus can save their life. But they don't always know the destination.

I'm very tall. I get to concerts very early. My whole life has meant accidentally being a nightmare for the people that show up after I do, and sometimes they take offense to that. It's odd to try to apologize for who you are and how you are shaped, as someone throws a beer can at your head for being...

Brutal cold for your Tuesday. Wind chills for your morning routine will be in the range of -5 to -15 across our area. Roads will still be slick and slow today. Clouds are expected all day with a few flurries and a high temperature near 12.

Flock of Dimes - Two is the song of the day and this is the OPEN THREAD for right now.

KANSAS CITY, Mo. - The Kansas City region has received more than 15,000 doses of the COVID-19 vaccine, according to Missouri Gov. Mike Parson. Parson announced on Monday that in the previous week 15,600 doses were given in the metro, in addition to what local health care systems have received and administered.

OVERLAND PARK, Kan. - The Blue Valley school board has voted to bring middle and high school students back to their classrooms full time, but they'll have to wait several weeks. The board voted 6-1 Monday night to have older students return on March 23 as long as the district is still in the green [...]

KANSAS CITY, Mo. - Pharmacies in both Missouri and Kansas are getting doses of the COVID-19 vaccine to give the public. The Johnson County Health Department says it knows of several local pharmacies that are getting doses. During a Facebook Live Monday afternoon, Elizabeth Holzschuh, an epidemiologist with the county health department said those pharmacies [...]

JOHNSON COUNTY, KS (KCTV) -- Johnson County Health Department announced Monday they are closing testing clinics. "Due to extreme winter weather, we're closing our COVID-19 testing clinic for the rest of the week (Feb. 9-12th) for the safety of our clients and our staff.

Roberts won't preside over impeachment trial, but Leahy set to follow his 2020 script

Sen. Patrick Leahy is expected to adhere largely to the script of Chief Justice John Roberts when he presides over the second impeachment trial of former President Donald Trump this week.But unlike when the robe-clad Roberts oversaw then-President Trump's 2020 trial, Leahy will routinely slip into his senator role for votes, including on whether to convict or acquit the former president of inciting the deadly Jan.

JEFFERSON CITY, MO (KCTV) -- The Missouri Department of Labor is going after some people that received unemployment benefits. The state says the people didn't actually qualify for unemployment. Not surprisingly, more people applied for unemployment in 2020 than ever before.

Kansas lawmakers push for more oversight for children and seniors

TOPEKA, Kan. (KSNT) - Kansas lawmakers are pushing for more oversight over child neglect and elder abuse cases. Lawmakers passed two bills out of committee, providing coordinated task forces to monitor each area in a hearing, Monday. This comes after lawmakers said they've seen issues arise in both areas from lack of attention and care.

Coaching awards usually come down to which team overcame the most obstacles and/or outperformed the outside preseason expectations. Mizzou was picked 10th in the SEC preseason poll - and sits at No. 10 in the nation. Alabama, picked fifth in the SEC, didn't crack the AP poll until Week 8 of the regular season.

LAWRENCE, Kan. -- Kansas dropped out of The Associated Press men's college basketball poll for the first time in 12 years on Monday, ending the Jayhawks' record streak of 231 consecutive weeks ranked in the Top 25.

KANSAS CITY, Kan. - There's a link to the fabled Underground Railroad located in Kansas City, Kan., though many people still don't know about Quindaro's connection to the secret network of routes and safe houses that helped slaves escape to free states during the pre-Civil War era.

Facebook: KC Pet Project SOURCE: Facebook: KC Pet Project Clear the shelter! Thanks to a pet food company, all dogs available for adoption as of the day of Super Bowl 55 will be fee-waived - they can go home with new families for free.Ziwi Pets - a natural pet food company out of New Zealand is sponsoring the adoption of all dogs that became available for adoption on or before Feb.

Kansas City singer/entertainer AY Young is known for putting a fun twist on his commitment to energy sustainability in appearances at Chiefs' tailgating festivities and performances at other local gatherings. He is the founder of Battery Tour, so named for his use of solar powered batteries as a concert energy source.