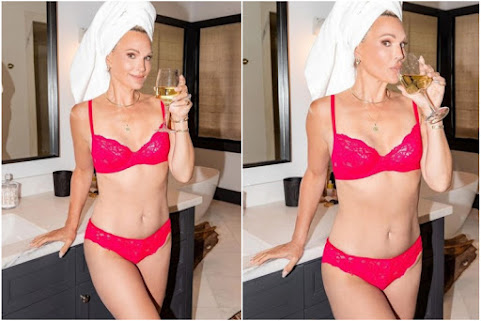 Not so long ago hottie Molly was one of our all time faves and her middle-aged good life continues via social media as we check pop culture community news and top headlines once again tonight.

KANSAS CITY, Mo. - These rooftop Starlight Snow Globes may be centered on an Icelandic theme, but the response to the rooftop concept has been anything but chilly. Hotel Kansas City, which opened in October, adopted a "whatever it takes mentality" to avoid furloughs and layoffs of key employees in the events and banquets business.

KANSAS CITY, Mo. - School districts are hopeful that Kansas Gov. Laura Kelly's announcement to earmark COVID-19 vaccine doses for teachers and students will help get kids back in the classroom faster. The federal government is sending 25,000 additional doses to Kansas. In total, Kansas will receive 115,000 doses per week.

Wyandotte County's health department opened a second COVID-19 mass testing and vaccination site this week at the former Best Buy site near the Legends, 10500 Parallel Pkwy.The county has also made seniors 65 and older eligible in the 66101, 66102, and 66105 ZIP codes based on the county's COVID-19 vulnerability index.

Former SI Swimsuit stunner Molly Sims flaunted her fit 5ft9in figure in Beleza Swimwear while on a Valentine's vacation with her family in Cabo San Lucas on Monday. The 47-year-old mother-of-three's pink one-piece featured flirty corset detail on the hips and she shielded her eyes with Gentle Monster shades.

Ted Cruz has repeatedly slammed politicians for vacationing during crisis

Texas Sen. Ted Cruz, who is facing backlash for traveling to Mexico as a winter disaster ravages his home state, has repeatedly criticized politicians who vacationed or took part in leisure activities during times of crisis, a CNN KFile review finds.

The fundraising rift could prove detrimental to Republicans, who are seeking to flip both the House and Senate in the 2022 midterm elections. Trump blasted McConnell this week after the Senate GOP leader said Trump was responsible for the Jan. 6 riots.

Ghislaine Maxwell admitted Epstein had tapes of Trump and Clinton

Ghislaine Maxwell told 60 Minutes producer Ira Rosen in 2016 that she didn't know where Epstein's tapes of Donald Trump were Rosen, an Emmy-winning producer, revealed he tricked Maxwell into confirming the recordings existed, in his new memoir, Ticking Clock, released Tuesday The encounter took place in early 2016, ahead of the US presidential election 'I want the tapes.

Biden administration says it's ready for nuclear talks with Iran

WASHINGTON - The Biden administration said Thursday it was ready to hold talks with Iran and other world powers to discuss Tehran's nuclear program, marking a first step in a possible diplomatic deal that could see Washington re-enter the 2015 Iran nuclear agreement.

David Letterman's critics have been resurfacing past interviews in which the host seemingly made some female guests uncomfortable in the past. The renewed attention of Letterman's treatment of his guests while he was the host of " The Late Show" comes after a resurfaced clip of him interviewing Lindsay Lohan in 2007 went viral.

KC man who grew up homeless now in engineering program

Engineering school has always been a dream for Jaacob Pledger. He's now a junior at Embry-Riddle's aerospace engineering program in Arizona. He said that dream was born in Kansas City."All my life, all I saw was myself being as an engineer, designing and building things," Pledger said.Most people know Pledger, 20, as a standout student and president of the Black Student Alliance on campus.

KANSAS CITY, Mo. - A Kansas City U.S. Marine Corps veteran is continuing to give back to his community, this time through his gift of art and passion for history. "There are a lot of thoughts that come to peoples heads when they think of a marine but I think he really shows us every possible facet of it," Kansas City, Missouri Mayor Quinton Lucas said.

Sun sticks around for Friday

Hide Transcript Show Transcript THIS IS FIRST ALERT WEATHER FINALLY CLOSING THE BOOK ON THE ARCTIC AIR THAT INVADED US AND OF COURSE A GOOD PORTION OF THE COUNTRY AS WE KNOW THAT AT ONE TIME. WHAT ABOUT 75% OF THE COUNTRY WAS UNDER SNOW WELL, WE WERE UNDER 15 DEGREES FOR HIGHS FOR 10 DAYS IN A ROW.

And yet he's still funnier, richer and more successful than you. Weird.

^^and you're a Democrap perv..so you identify with him..


speaking of Democrat pervs...Slick Willy documented to have been on 26..yes..TWENTY-SIX! flights to Pedo island..yet the lib story is all about pictures of Prez Trump at a party with Epstein..

“FREEZING! Anyone can or want to leave for the week? We may go to Cancun. Hotels w capacity. Seriously.” -- Heidi Cruz, dominant wife of Sen. Ted Cruz, as she and Teddy abandoned Texas during one of its worse state crisis ever.

And yet Trump never won the popular vote while McConnell has won six senate races. Weird. I wonder where the smart money will go.

This just in: Rush Limbaugh is still dead!

^Apparently Rush is still living in your head.

Hey, did they ever catch those assassins AOC said that Ted Cruz sent after her?

You guys are such comedians. :)

Do you really think letterman was funny? You rush to his defense here, but, come on man, letterman sucked for a long long time.