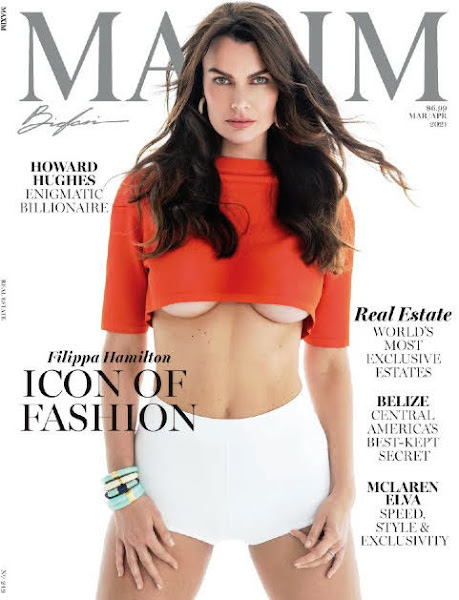 Right now this #TBT tribute to old school "lads' mags" inspires us to take a step back and share some of the more interesting, upbeat or otherwise captivating items from pop culture, community news and top headlines.

A divide between those with sufficient internet and the knowledge to use it, and those without, has become prominent during the COVID-19 pandemic. Some students have been without devices and there are older adults who have struggled with making appointments online.

Filippa Hamilton takes a few steps towards the camera and her long brown hair flutters over a transparent John Galliano dress. The French-Swedish supermodel is on a quick visit to Paris to star in the cover shoot for March/April issue.

Microsoft co-founder Bill Gates on Wednesday pushed back against a statement made by Texas Gov. Greg Abbott (R) in which he blamed recent widespread power outages in his state on a failure of solar and wind energy sources. Millions of Texans have gone days without power this week as massive winter storms brought freezing temperatures and devastated the state's power grid.

Is Sen. Ted Cruz now going to be known as "Flying Ted"? Social media erupted early Thursday with multiple photos purportedly showing a masked Sen. Ted Cruz boarding a plane and then flying to Mexico even as millions of his fellow Texans froze because of historically low temperatures and widespread power outages.

subscribe to The NPR Politics Podcast podcast Congressional Democrats unveiled a sweeping immigration bill Thursday, which includes setting up a path to citizenship for the estimated 11 million undocumented immigrants living in the United States. The measure is backed by President Biden and closely aligns with the plan he proposed on his first day in office.

Other health experts say it shows the profound impact of COVID-19, not just on deaths directly due to infection but also from heart disease, cancer and other conditions. "What is really quite striking in these numbers is that they only reflect the first half of the year ...

Country music legend and Tennessee native Dolly Parton asked state legislators to remove a bill to erect a statue in her honor on Capitol grounds. Parton, 75, said she was "honored and humbled" by the gesture but doesn't think it's the right timing.

FAIRWAY, KS (KCTV) -- We want to thank everyone who donated to Project Warmth on Tuesday. So far we have raised more than $56,000. There's still time to help out your neighbors struggling to pay their utility bills this winter. At this time, KCTV5 News is not accepting coats or blankets.

KANSAS CITY, Mo. - KPRS has been on Kansas City's airwaves for decades, and has heard it all. "The name, like I said, Carter Broadcast Group around here means a lot coming from what's been beforehand," KPRS radio personality, Chris 'Playmaker' Stimpson said. Andrew 'Skip' Carter began Carter Broadcasting on the AM dial in 1949, [...]

Mix of clouds and sunshine, highs around 22 degrees

Hide Transcript Show Transcript FEET, SEVEN FEET IN SOME AREAS. WE HAVE ALMOST WHAT LOOKS LIKE A DECK OF LOW CLOUDS OR FOG BETWEEN THE SPORTS COMPLEX IN DOWNTOWN KANSAS CITY. THIS IS FROM OUR TOWER CAM ON THE EAST SIDE. A DEGREES AND THE AIRPORT IS REPORTING SOME FLURRIES.

9 to 5 by Dolly Parton ranked Billboard #1 in February of 1981 and is the #TBT song of the day. This is the OPEN THREAD for right now.

KANSAS CITY, Mo. - We are working our way out of a historic deep freeze in Kansas City. While the worst of the impacts may be behind us, there is still the risk of pipes bursting inside of homes. During a deep freeze, pipes can burst when water inside them freezes and expands, putting pressure on pipes walls.

KANSAS CITY, Mo. - The Kansas City, Missouri, Public Library's North-East Branch has reopened after more than one year in a temporary home to allow for a $4.5 million renovation project. Granted only a limited number of services are currently available because of restrictions in place at all library branches to prevent the spread of COVID-19.

KANSAS CITY, Mo. - Many occupations require you to have thick skin, including law enforcement. Adding that thick layer sometimes means losing other important things, as Officer John Lacy recalled. "I lost a friend this past summer I've known since elementary school. And he said, with everything that's going on, 'I know you're law enforcement.

College students who lost class time or were forced into online classes because of the pandemic could have some of their tuition refunded under a measure Kansas lawmakers are debating. A House panel amended the state's higher education budget Wednesday to require that colleges, community colleges and technical schools reimburse students for 50% of the tuition paid every day they spent online instead of in the classroom.

JEFFERSON CITY - Restaurants in Missouri are one step closer to making take-home cocktails a permanent part of their menus. In action Wednesday, the Missouri House gave preliminary approval to legislation allowing the sale of alcoholic beverages with carryout meals under certain conditions. The change is an outgrowth of the pandemic.

LEAVENWORTH, Kan. - Talk about being discovered! Last winter, someone found a shivering 5-month-old puppy near a snowy woodpile in Leavenworth, Kansas. "Pepsi," as he was later named, was also suffering from heartworm. "They took him to the shelter, and there's just too many dogs, so he was at risk for euthanasia," said Melissa Millett, [...]

Alex Smith will always be one of Chiefs Kingdom's favorite players as one of the greatest quarterbacks to ever play for the franchise. Not only did he help restore the Chiefs to respectability in his first few years under Andy Reid, but he also helped turn the team into a perennial playoff contender with a dynamic offense with a stellar final season under center with MVP-esque numbers at times.

When I called new Kansas City Chief Operating Officer Amber Cox, she answered from a room filled with basketball memorabilia, a whiteboard with a court on the wall behind her. She was still in Connecticut, finishing up her most recent role as Vice President of Sports at Mohegan Sun, where she was in charge of generating revenue for the Connecticut Sun and the New England Black Wolves.

Krystal Webb started her business Boss.Queen to share her jewelry-making skills, but she also quickly discovered it is also a vessel to empower other women. "We all rise to the top when we all support each other," she said. Webb is raising three girls with her husband and wants to teach them by example.

A Kansas City, Kansas, community outreach group is doing all it can to help keep people warm.

Anonymous said…
Cruz should have stayed in Texas and hired Beto O'Rourke to blow hot air at all those frozen windmills.
2/18/21, 4:00 PM

Anonymous said…
And he was supposed to stay back in Texas and do what exactly to resolve the problem? The Libtards have lost their minds and are trying to take the focus off of the Cuomo killings of nursing home residents.
2/18/21, 4:02 PM

Anonymous said…
The amount of Bill Gates in the news is too damn high. He needs to STFU for six months or so and get out of the limelight.
2/18/21, 4:11 PM

Ol' Cancun Cruz said…
“I was speaking this weekend with the meteorologist expert who was saying the combination of these two storms, we could see up to 100 people lose their lives this week in Texas. So don’t risk it. Keep your family safe and just stay home and hug your kids,” -- Ted 'Cancun' Cruz, Feb. 15.
2/18/21, 4:16 PM

Dolly Parton is a far left liberal. Bill Gates needs to keep his big mouth shut he's not a politician, but then again the left always goes after that money and Gates has plenty of it.
2/18/21, 4:22 PM

Anonymous said…
What a renaissance man Bill Gates is. Apparently his ill-gotten billions make him an expert not just in computer software but in viruses and vaccines, environmental science, and power generation. Is there anything about which he knows less than other people.
2/18/21, 4:37 PM

Anonymous said…
Gates and many others (Paul Krugman would be a good example) assume that because they know a lot about one thing, they know a lot about all things. They are far from reluctant to share their wisdom with the world, and being proved wrong does not deter them in the slightest.
2/18/21, 4:57 PM

Anonymous said…
You guys. Only Gavin Newsom is allowed to travel during a crisis!

Democrats. When they come up with a single standard of behavior that they hold themselves accountable to, let us know.
2/18/21, 5:28 PM

Anonymous said…
Your small monkey brain doesn't have a very good memory. A whole summer's worth of riots and violence, with Democrats fully in support of it.

Anonymous said…
@6:01 In some people's minds, there is a difference between "rioting" and trying to overthrow the Government. Guess "whataboutism" makes it impossible for you to see that though.
2/18/21, 6:33 PM

Anonymous said…
The small number of DC protesters who were violent weren't nearly as ready for warfare as the Antifa and BLM maggots the rest of the year.
2/18/21, 6:37 PM

You brightened Blue Parkway with the smell of your Barbecue smoking.

L.C.s and Nieces was a nice little oasis on Blue Parkway.

Anonymous said…
Bill Gates is such a phony.

He stole Apple's and Lotus 1-2-3 programming to make a fortune.

His ugly house is 50,000 square feet of ugly sprawl on Lake Washington in Seattle.