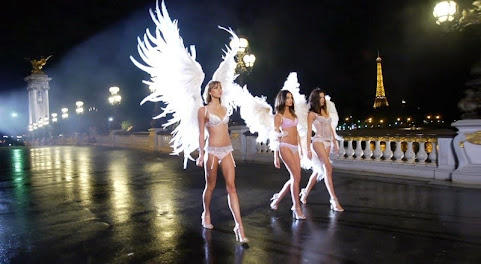 To start Sunday morning we consider the fate of the angels along with pop culture, community news and top headlines.

Kansas City, Missouri, Mayor Quinton Lucas and Rashida Phillips, director of the American Jazz Museum based in the Historic 18th and Vine Jazz District in Kansas City, delivered on Saturday a saxophone to Disney's Epcot theme park for a temporary exhibit.

In Depth: Northland coalition vaccinating 4,500 people every other week

Victoria's Secret interim CEO stepping down in the midst of turnaround

Victoria's Secret's interim CEO is stepping down in the middle of a turnaround of the troubled lingerie company. Stuart Burgdoerfer, the longtime CFO of the company's parent, L Brands, had served as interim CEO of Victoria's Secret for the past nine months and has helped steer sales upward despite the pandemic by streamlining its product offerings and widening the customer base, including through plus-sized models.

Trump spent the weeks following the election alleging mass election fraud. His attempts to overturn the results have reportedly cost taxpayers more than $519 million so far. More than $488 million was for Capitol security while another $30 million was in state costs. Visit the Business section of Insider for more stories.

The chairman of the Senate Budget Committee Saturday evening that it was "unbelievable" that there were some Democrats "who want to lower the income eligibility for direct payments from $75,000 to $50,000 for individuals, and $150,000 to $100,000 for couples."

Covid reinfections may be more common than realized. Why isn't the US tracking them?

Kaitlyn Romoser first caught Covid-19 in March, likely on a trip to Denmark and Sweden, just as the scope of the pandemic was becoming clear. Romoser, who is 23 and a laboratory researcher in College Station, Texas, tested positive and had a few days of mild, coldlike symptoms. In the weeks that followed, she bounced back to what felt like a full recovery.

"The way I've spoken about myself and my deep connection to two cultures could have been better explained." "My parents raised my brother and me with two cultures, American and Spanish, and I feel a true sense of belonging to both." Well, then. I guess that's that.

TAMPA, Fla. - Just getting on the practice field was a victory for Alex Smith. Leading Washington to the playoffs? The stuff dreams are made of, perhaps. The 36-year-old quarterback completed a remarkable comeback from a broken right leg that required 17 surgeries to repair.

The Super Bowl is almost here, and Kansas City Chiefs fans are serious about game day celebrations. We know everyone is going to host or attend some sort of Super Bowl party, be it at home or in a bar and restaurant. Frugal football fans can score big with several great deals on food.

Hide Transcript Show Transcript DOWN THERE IN TAMPA KATIE. OH, YEAH, AND BY THE WAY, I AM DRESSED FOR TAMPA. I KNOW I'M NOT DRESSED FOR KANSAS CITY SNOW. BUT HEY, I'M SUPPORTING THE CHIEF.

The Verve - Bitter Sweet Symphony is the Sunday song of the day and this is the OPEN THREAD for right now.


Patrick Mahomes doesn't look like a two time champion. He looks like a half wit pimp. That's just what he is!

Have a good game Ried and don't forget the little girl who is fighting for her life because of your no good drunk son. Anyone who could go about their day with this on their head is not human, but a monster. Think about this while all of you selfish players are kneeling for greed and hate. Pathetic.

You all know we are picking up the tab for this show of Lucas and staff all having a great time in sunny Florida.

Yup we paid or will pay for the plane tickets, all the dinners, hotel rooms, car rentals, and cab fares, but I'm betting more like limo rides. How does dropping huge amounts of Kansas City tax dollars in Tampa benefit the city any? A huge Super Bowl watch party at Bartle for all the homeless with Lucas in attendance would have been better spent money. But you see it's all about Lucas, his cronies and not Kansas City.

Yes, you the taxpayers are on the hook for who knows how many of his staff and friends to go play in sunny Tampa a few days before the Super Bowl and what ever costs for going to the game all entails. Any bets he is in a high dollar suite all paid for by everyone but him.

Remember he owns no real property in Kansas City and maybe even gets a free ride from the E-tax.

Interesting how many elected official and high appointed members of the city government have no real investment in Kansas City out of getting a pay check from you the taxpayers.

A demand by local media should be made to put forth what it cost the taxpayers for this trip. Outside of 18th and Vine nobody else in the country cares about the so called Jazz Dist.

Lucas added the exhibit serves as an ambassador for Kansas City. Plus it then allows the city to pay for Rashida Phillips and friends costs to all go to the Super bowl to party with Lucas.

“I hope everyone who sees the saxophone at Epcot recognizes there are so many more stories to learn in Kansas City and comes out to visit,” he said.

Sure like millions will risk going to a neighborhood where in all reality you'd probably be robbed or shot and maybe both to see what, a plastic saxophone?

"More than $488 million was for Capitol security"

Trump didn't cause that, the democrat's did and still are trying to make you all believe they are in harms way.

The attack on the White House was a carefully preplanned event to make Trump look bad. You Biden supporters have truly fucked this country and I hope it's very pain full for every one of you who voted for him.

Thank God in a few hours all this Super Bowl crap will be over. Wasn't this much attention given to the fake elections we just had to deal with.

Oh and fire Lucas, charge him with fraud.

7:13: Ummm, and do you have any facts to substantiate your raving lunacy?

He does look like a half-wit.
Add Brittany with her stupid mouth hanging open.
They are a couple of beauts.

The article dodges the sordid history of that Plastic Saxophone!
Parker never played it, his wife says he hated the way it sounded, but Cleaver and Threat paid her $250,000 for it!

on't want to get intotrouble with some local Vitamin TyCOON!

8:41 took the words right out of my mouth! Charlie Parker never played it, matter of fact this is the first time I heard it was given to him. I remember back when the idiot cleave dropped a quarter mil on that damn thing and back then the thought was that it might be connected to him, there wasn’t any proof that there was a connection. I also love the fact that Parker left kc and didn’t want anything to do with kc and begged his wife to not let him be buried here. Parker is the sole reason the jazz district exists and the man left here at 16years old hating the place so bad that he probably committed suicide to keep from coming back here.

The Muller investigation sham was $1.5 billion. The impeachment shinanigans were probably about the same cost. Nearly 20% of Demoncraps think the election was stolen from Trump.


Q apparently forgot the city was in a pandemic, the vax shortage affecting the city and the shit show at Bartle was going on....RECALL!!!

thank you to the posters about the saxophone

i will offer this to my fellow critics and amused persons who behold this 18th and vine jazz district ...

see unlike most of you i actually do go around the city and see places. i route through there all the time ripping down paseo, then by troost lake, then cutting to vine, rip under the highway bridges, down along where the workhouse used to be "castle" etc. to the jazz district, cut to woodland, then woodland north used to be able to take it past independence ave but now vacated, etc. i hope the city never ruins paseo like the way they ruined gillham with stupid bike lanes. but, this is a digression'

anyway, so when you actually go down there, sometimes you do see some european and asian type tourists who do see this on a tourist brochure and, son of a bitch call the newspapers, some actually do show up and actually do check out the museum and its sad facade neighborhood. and to watch them as they they look around and behold the place, like "the fuck is this place supposed to be?!"

it is the saddest disneyland fake thing you can imagine. by now event he fake facade businesses are getting run down. what is that? dilapidation of a false storefront? is that even a concept in the eco devo space now? like a KC innovation?

RE: "Kansas City, Missouri, Mayor Quinton Lucas and Rashida Phillips, director of the American Jazz Museum based in the Historic 18th and Vine Jazz District in Kansas City, delivered on Saturday a saxophone to Disney's Epcot theme park for a temporary exhibit."

This is how you justify your FRIVOLOUS JUNKET to Tampa. You claim that the Mayor and Jazz Museum director HAD TO personally deliver the saxophone.

Never mind that they both are overpaid taxpayer leeches, delivering a piece of plastic that former Mayor Carwash squandered a small fortune to acquire, when it has a very questionable lineage.

This episode is very representative of why KCMO is a corrupt Democrat high-tax, inefficient, beholden to public-safety union city that will be bankrupt unless they receive a federal bailout.

wearing lingerie and angel wings is a psychological disorder.

I would enjoy sticking my saxophone between Rashida's lucious, big boobs.