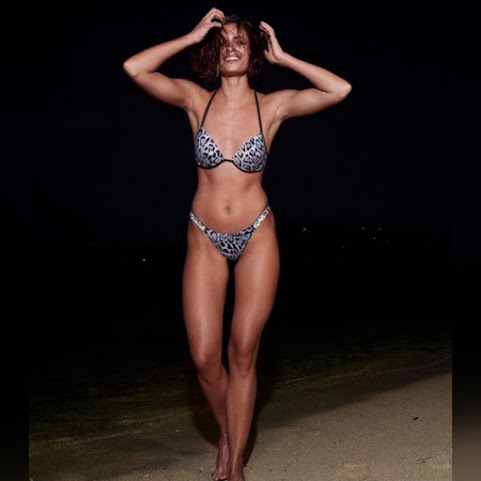 Right now hottie Taylor getting a skivvy promo jump start on warmer weather inspires this peek at pop culture, community news and top headlines for the late night denizens of our blog community.

OLATHE, Kan. - Kansas City, Missouri, leaders adopted a resolution proclaiming February, 27, 2021, as VFW Foundation Day. The Kansas City-based foundation celebrates its 25th anniversary this year. As the charitable arm of the Veterans of Foreign War, the VFW Foundation provides scholarships for veterans, grants for VFW Posts and sponsors send-off and welcome-home events before and after military deployments.

MISSION, Kan. - Mission, KS is hosting its own restaurant week to support local businesses during the pandemic. Lalo Alvarez, the owner of The Corner Lalo's Kitchen, hopes it will give his restaurant some exposure. Alvarez came to America from Mexico at the age of fourteen and worked in the kitchen of many restaurants.

The US-born model, 24, was celebrating global creativity. Taylor earned her third cover for fashionista magazine Vogue's Mexico edition with a leggy pose. And that meant also working flat out inside, lounging in skimpy dress and black stockings. She gushed to fans on social media: "My third Vogue Mexico cover!

The Golden Trump Statue Is the Talk of CPAC. It Was Made in Mexico.

A golden statue of former President Donald Trump has turned into the talk of the Conservative Political Action Conference taking place in Orlando. CNN, for example, calls the more than six-foot-tall statue the " indisputable star" of the conference. The statue has Trump wearing a suit jacket with white shirt and red tie plus American-flag shorts.

A second former aide to Democratic New York Gov. Andrew Cuomo has come forward with allegations of sexual harassment, which came just days after his first accuser made her claims public.


Prez Stands Up To Democratic Party On National Defense

President Joe Biden on Saturday told Congress that the airstrikes he ordered in Syria this week were consistent with the U.S. right to self-defense, as members of his own party called for more transparency about why military action was taken without congressional authorization.

Rep. Anthony Brown (D-Md.) said Democratic leaders must work "gingerly" to keep their members together on the floor, particularly on what he termed "messaging" bills that have little chance in the 50-50 Senate and already generate internal divisions. "It's odd, you know, when you're controlling both chambers and the White House and you're still doing messaging bills.

Johnson & Johnson's Covid-19 vaccine gets emergency use authorization from FDA

The US Food and Drug Administration authorized Johnson & Johnson's Covid-19 vaccine Saturday. It is the first single dose Covid-19 vaccine available in the US, and is one that "checks nearly all the boxes."

A 'Lamborghini' Of Chariots Is Discovered At Pompeii. Archaeologists Are Wowed

Calling it an "exceptional discovery," researchers at Pompeii have announced the uncovering of an intact ceremonial chariot from a villa near the famous archaeological site. The announcement Saturday called the chariot "an extraordinary find" which "has no parallel in Italy thus far."

Emmanuel Acho to Replace Chris Harrison for 'After the Final Rose'

Chris Harrison's out, and Emmanuel Acho is in -- he's officially set to fill in as host for 'The Bachelor' season finale episode ... this amid a racism scandal that won't go away. The former NFLer and current FS1 sports broadcaster broke the news Saturday, taking to Twitter to write ...

Relief grants from a leading economic development initiative are as much about building momentum as surviving the pandemic, said Nika Cotton, emphasizing Troost as a good place to start. Cotton, owner of the Soulcentricitea tea shop at 30th Street and Troost Avenue, is using a $5,000 award from the Economic Development Corporation of Kansas City, Missouri, to help launch efforts for her community organizing fund.


EPIC Sunday On The Way

Hide Transcript Show Transcript KNOW FIRST. THIS IS FIRST ALERT WEATHER. EMILY: A BEAUTIFUL DAY IN KANSAS CITY. 60'S, SUNNY, A LITTLE RAIN CHANCE TONIGHT. NEVILLE: A SLIGHT RAIN CHANCE BUT IT IS STILL FEBRUARY, IT WAS IN THE 60'S SO IT FELT EXTRA NICE, A LITTLE WINDY.