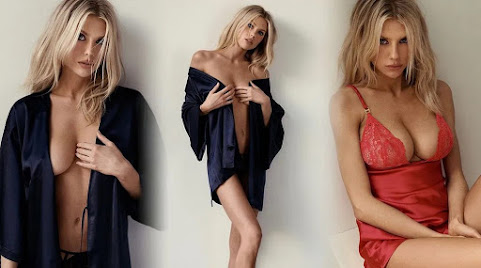 This morning we start off with just a few local links that are worth a look along with newsworthy hottie CharMac doing her very best to revive a panty brand suffering COVID harsh times. And all of THAT inspires this look at pop culture, top headlines and more . . .

Even Though Doses Are Low, Older People In Kansas City Are Getting Help Finding Vaccinations

James Watts was eager to travel again, to see his children and grandchildren. This week, that dream inched a bit closer to reality when the 71-year-old from Kansas City got his first dose of the Moderna COVID-19 vaccination at the Linwood YMCA. "I want to be able to see (family), with some protection," Watts said.

OVERLAND PARK, Kan. - The original Chiefettes Drill Team started in 1965 thanks to an Overland Park woman with a passion for teaching dance. Shirley Marley is 84 years old and is still turning out professional performers from her studio, The Miller-Marley School of Dance and Voice, in Overland Park.

What Happened To Charlotte McKinney After 'Baywatch'?

One of the most notable works that Charlotte McKinney took part in since starring in Baywatch was the film Fantasy Island. The path to stardom is one that is unique for each traveler, and while it may take years, those with the talent and the determination can find a way to make a name for themselves in the business.

Fox Business Network viewers may have seen the last of conservative talk host Lou Dobbs, after the cable network canceled his show, "Lou Dobbs Tonight," on Friday. It would be an unceremonious ending for Dobbs, 75, one of Fox Business Network's highest-profile personalities and one of the strongest supporters of former President Donald Trump in cable news.

Biden's coronavirus relief plan included a provision that raised the minimum wage to $15 an hour by 2025. Sen. Bernie Sanders (I-Vt.), the chair of the Senate Budget Committee, has been leading the charge to move it forward in the Senate through the so-called reconciliation process, which essentially allows Democrats to pass a broader coronavirus relief package without GOP support.

President Joe Biden said that former President Donald Trump should not receive intelligence briefings even though they typically have been given to other former presidents. Biden told CBS News in an interview that Trump was "unfit to be president" and his "erratic behavior" is why he should not have access to the nation's classified information.

s prosecutors from the House of Representatives prepare to present their case against Donald Trump at his impeachment trial next week for incitement of insurrection, supporters who heeded his call on 6 January to "fight like hell" and went on to storm the Capitol Building are finding themselves in far greater legal peril.

In their arguments against House Democrats stripping Rep. Marjorie Taylor Greene's (R-Ga.) committee assignments on Thursday, House Republicans repeatedly warned in not-so-subtle terms that when they take power, they will remove Democrats who have made controversial comments. Democrats initially attempted to get Republicans to remove Greene on their own - like they did with then-Rep.

Tekashi 6ix9ine is BACK! Drops New Music, Claims Internet Is Boring Without Him

"Coming to save 2021!! 🔥🌈 Insta becomes entertaining again 😂👊," a fan wrote after seeing the clip. "He's Back! 🐐 is back," other agreed. But, as you can imagine not everyone is pumped to see the 'TuTu' rapper, posting things like, "I blame Covid-19 for this."

KANSAS CITY, Mo. - Excitement is building on this final Red Friday before the Super Bowl. As fans prepare for game day celebrations, police are planning how to keep everyone safe. Chiefs Kingdom is pumped, itching for Super Bowl Sunday to arrive. "It's pretty exciting.

TROLLZ - 6ix9ine & Nicki Minaj is the song of the day and this is the OPEN THREAD for right now.

chuck said…
The FBI is a corrupt, ersatz Gestapo organization that has and is, ignoring the Constitution, the "spirit of the law" and whose number one priority is conjuring up, ex nihilo, out of whole cloth, crimes real, imagined and exaggerated in order to bend to their will and criminalize at the instructions of the Deep State D﻿﻿﻿﻿﻿﻿卐﻿﻿﻿﻿﻿﻿M﻿﻿﻿﻿﻿﻿☭﻿﻿﻿﻿﻿﻿CRATs Trump supporters.

CNN talking heads call for "Drone Strikes" on Trump supporters. Re-education camps for those who don't toe the D﻿﻿﻿﻿﻿﻿卐﻿﻿﻿﻿﻿﻿M﻿﻿﻿﻿﻿﻿☭﻿﻿﻿﻿﻿﻿CRAT talking points and refuse to believe the lies being told about the election of 2020, WHICH WAS RIFE WITH ILLEGALITIES AND PREMEDITATED CRIMINALITY.

Even Time Magazine, gleefully explains how the election was stolen.

They (Time) don't care if you are enraged, because they know we all live now, in the FASCIST STATES OF AMERICA and the "power stemming from the end of the gun barrel" in the hands of the Stasi/Gestapo/FBI/DOJ lizards that rule over us all by way of force and corruption.

These are American Political Prisoners and the only thing worse than what is going on now, is the insult to our intelligence, which insists that we believe their fuckin goddamned lies or go to jail.

About time. He's been useless for years. Anyone who followed his financial advice lost money, and his conspiracy theories were just as looney as his stock picks.
2/6/21, 10:34 AM

Anonymous said…
Do we have a forwarding address to send Chuck gifts when they send him to Guantanamo Bay?
2/6/21, 10:59 AM

Anonymous said…
10:06 sorry the tax increase coming this year was enacted by your dear leader and the republican congress when they gave the farm away to the billionaires. Pay up your support got the rich what they wanted and you pay the price, just like those morons wearing work clothes to invade the capital with the bosses phone number on their back.


As usual Chucky is jut full of shit, nothing he writes is true generally more blathering from other morons. You lost get over it you snowflake baby
2/6/21, 11:06 AM

Anonymous said…
President Joe Biden's tax plans were laid out for all to see during his campaign last year. Yet, immediately after the election, conventional wisdom said that Biden wouldn't be able to implement much of his agenda because Republicans in the Senate were going to block most of his tax policies. But that all changed when Democrats took control of the U.S. Senate in January. That means Democrats will control both the House and the Senate for at least the next two years, and Biden's tax plans have been resuscitated because of it.

He won't get everything he asks for, though, because the Democratic majorities in Congress are razor thin. And don't expect quick action on tax changes because he'll have more important things to worry about early in his presidency (e.g., the pandemic). But let's take a fresh look at some of the higher-profile tax policy proposals Biden pushed during his run for the presidency. Brush up on them now, so you're prepared if and when he gets a some of his ideas through Congress.
2/6/21, 11:12 AM

Joe Biden* said…
President Biden*’s major tax proposals
1. Higher maximum rate
The pre-election Biden tax plan would raise the top individual federal income rate on ordinary income and net short-term capital gains back to 39.6%, the top rate that was in effect before the Tax Cuts and Jobs Act (TCJA) lowered it to 37% for 2018-2025. Biden also said he would generally raise taxes on folks with incomes above $400,000 without supplying specifics.

For upper-income individuals, Biden would reinstate the pre-TCJA rule that reduces total allowable itemized deductions above the applicable income threshold. Allowable deductions are reduced by 3 cents for every dollar of income above the threshold.

Biden would eliminate the TCJA’s $10,000 cap on itemized deductions for state and local taxes.

5. Elimination of basis step-up for inherited assets
Under current law, the federal income tax basis of an inherited capital-gain asset is stepped up fair market value as of the decedent’s date of death. So, if heirs sell inherited capital-gain assets, they only owe federal capital gains tax on the post-death appreciation, if any. This provision can be a huge tax-saver for greatly-appreciated inherited assets — such as personal residences that were acquired many years ago for next to nothing and are now worth millions. The Biden plan would eliminate this tax-saving provision.

7. Increased child- and dependent-care credits
Under current law, parents can collect a credit of up to $2,000 for each under-age-13 qualifying child. This is a refundable credit, which means you don’t have to have any federal income tax liability to collect the credit. In other words, the child credit is “free money.”

The Biden tax plan would increase the maximum refundable child credit to $4,000 for one qualifying child or $8,000 for two or more qualifying children. Families making between $125,000 and $400,000 would receive reduced credits. Apparently, the same rules would apply to an enhanced credit for expenses to care for qualifying dependents.

Biden would also establish a new credit of up to $5,000 for informal caregivers.

8. New credits for homebuyers and renters
The Biden plan would create a new refundable tax credit of up to $15,000 for eligible first-time homebuyers. The credit could be collected when a home is purchased, rather than later at tax-return filing time. Biden would also establish a new refundable tax credit for low-income renters. The credit would be intended to hold rent and utility payments to 30% of monthly income.

Biden would reinstate or expand tax incentives intended to reduce carbon emissions — such as deductions for emission-reducing investments in residential and commercial buildings and restored credits for buying electric vehicles produced by manufacturers whose credits have been phased-out under current law. Biden would also eliminate federal income tax deductions for oil and gas drilling costs and depletion.

One of the biggest changes in the 2017 Tax Cuts and Jobs Act (TCJA) was the installation of a flat 21% corporate federal income tax rate for 2018 and beyond. Before the TCJA, the maximum effective rate for profitable corporations was 35%. The Biden plan would increase the corporate tax rate to 28%. This change would raise an estimated $1.1 trillion or so over 10 years.

Joe Biden* said…
There WILL NOT be a recovery under my administration. It is forbidden. We want people dependent on the government.
2/6/21, 11:19 AM

Anonymous said…
Holy cow! Someone is actually willing to defend the Biden disaster!
2/6/21, 11:23 AM

Anonymous said…
I hope AOC is ok. After all, she was practically murdered or something something during the Capitol nonsense. Did they ever catch the swarms of assassins shecsaid aged Cruz sent? Dangerous times. ;)
2/6/21, 11:25 AM

Anonymous said…
Okay "Chuck", which it it?
Is there some sort of "Deep State" that controls everything in this Country,
-OR-
ar you permitted to spout any sort of insanity you've been fed by the Far Right Conspiracy Theorists on this blog every day?

Byron Funkhouser said…
This administration is gonna fuck everyone the next three years.

Anonymous said…
Lou Dobbs is NUTS! He thinks the supreme court judges kill babies, eat them and drink their blood! And worship Satan - and Trump is the only remedy to oust them. I mean really! In the 1980's you would go to a sanitariam if you said that stuff. Now people are "politically correct", and ignore your comments, but it doesnt mean your any less crazy.

Anonymous said…
It's too bad the Libtards weren't trying nearly this hard to nab the killers of two black men in Seattle's CHOP Zone last summer. Did they ever catch the killers there or was that swept under the rug like all the other violence and killings from the Libtards' favorite groups, Antifa and BLM.
2/6/21, 3:54 PM

Anonymous said…
MAGA did attack the Capital. The lady shot dead was a huge MAGA fan according to her Mom, husband and friends. Her facebook pages going back years show it. She was the first to try and get down the hall where Nancy Pelosi and crew were hiding. And she wore a MAGA hat when she died.