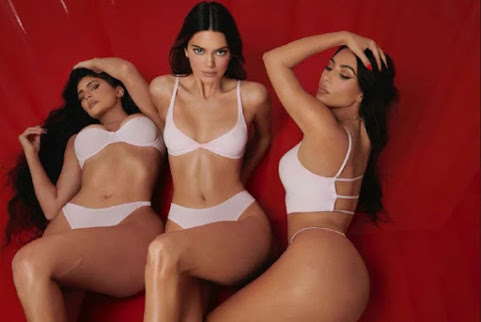 We start this "love weekend" inspired by celebrity sisters sharing a bit of closeness in order to promote their corporate brand of skivvies. And all of THAT leads us to this collection of community news, pop culture and top headlines.

INDEPENDENCE, Mo. - The long-awaited vaccine has finally arrived at one of the metro's largest retailers. Five Walmart locations on the Missouri side of the state line, as well as three in the metro's Kansas regions, began vaccinating customers on Friday morning. Customers that FOX4 spoke with said the vaccines arrived at a crucial time.

KANSAS CITY, Mo. - When and how to re-open schools and return students to in-person learning has been at the center of debate for months. "I want to be clear, with the release of this operational strategy, CDC is not mandating that schools reopen," Dr. Rochelle P.

Fire departments are reminding people to make sure they have a working carbon monoxide detector, especially on brutally cold nights.It's a call the Overland Park Fire Department trains for constantly.

All this comes as the reality star continues to deal with her "split" from Kanye West. The famous mogul is preparing for quite the Valentine's Day as she shared a behind-the-scenes look at an upcoming campaign for her SKIMS Fits Everybody collection for the special love holiday.

"I Will Destroy You": Biden Aide Threatened a Politico Reporter Pursuing a Story on His Relationship

A White House official tried to quash a story about his relationship with a reporter by issuing threats and using derogatory language to another reporter pursuing it, according to two sources familiar with the incident. In a sympathetic profile Monday, People revealed that White House deputy press secretary TJ Ducklo is dating Axios political reporter Alexi McCammond, who covered the Joe Biden campaign.

It's not lost on historians that Donald Trump's impeachment trial acquittal will fall on Presidents' Day weekend, a holiday celebrating the examples set by America's first president, George Washington, and Abraham Lincoln, who held the republic together through civil war and ended slavery.

At best, Republicans could use their votes to avert the impending cliff as leverage to notch GOP policy wins in negotiations later this year. At worst, they could let the cuts set in as punishment to Democrats for using the reconciliation tool to negate GOP input as the majority party pushes to advance Biden's package with just 51 votes in the Senate.

While former President Donald Trump watches his second impeachment trial unfold, Melania Trump spends most of her time post-White House relaxing at the spa and staying out of the fray.

Since releasing her sophomore album Future Nostalgia to chart-topping sales last March, Dua Lipa has barely paused to take her foot off the gas. Whether it was the follow-up remix album Club Future Nostalgia, featuring cameos from Madonna and Missy Elliott, or the thrilling Studio 2054 livestream concert that debuted in November to a record-breaking audience of 5 million people, Lipa has been keeping her fans almost as busy as she is.

Courtney Hall and Cruz Barnas worked in the live entertainment industry for years in production before being laid off at the start of the COVID-19 pandemic. After a few months of uncertainty, they started a hot sauce company and found the new passion has led to a new career.

Over 2,000 Evergy customers in Parkville lose power on cold night

PARKVILLE, Mo. - Hundreds of Evergy customers in Parkville were without power Friday night as single-digit temperatures gripped the region. Evergy's outage map showed just over 2,000 customers were affected, as of 8 p.m. The outage appeared to affect people who live near Interstate 435 and Highway 45. As of 9:15 p.m.

Entire metro is under wind chill advisory until noon Saturday ﻿

Hide Transcript Show Transcript EVERYTHING. HE IS SO INTERACTIVE ON SOCIAL MEDIA. WE ARE LOOKING DOWNTOWN. IT IS NICE AND QUIET. IT IS NOT SNOWING. IT IS SUPERCOLD. ONE BELOW AND IT FEELS LIKE IT AT 21 BELOW. OUR NORTH WIND IS BLOWING AT 15 MILES AN HOUR.

Dua Lipa - We're Good is the song of the day and this is the OPEN THREAD for right now.

Here's how you can share a memory of Coach Schottenheimer, donate in fight against Alzheimer's

KANSAS CITY, Mo. - Kansas City Chiefs fans, others around the NFL, and loved ones are grieving the loss of former coach Marty Schottenheimer, who died earlier this week . He had Alzheimer's and passed away on Monday, he was first diagnosed in 2014.

"The more distilleries, the more Kansas City is going to get recognized for [its whiskey]," said Michael Hopkins of West Bottoms Whiskey, acknowledging local leaders in liquor like J. Rieger & Co. and Tom's Town. "I think the general consensus is that there's room for everyone."

GoFundMe started for Independence teacher, husband who died of COVID-19

KANSAS CITY, Mo. - A was started for an Independence couple who died of COVID-19 the same night - and in the same room - on Wednesday. According to the GoFundMe page, Teri and Doug Cook both contracted the virus in the first week of February.

Feds to double the number of vaccines it sends to Kansas

MISSION, Kan. (AP) - Kansas is anticipating getting 90,000 doses of COVID-19 vaccine next week, double what the state was receiving just two weeks ago, Gov. Laura Kelly announced Friday. As of Friday, 9.4% of the state's population had been vaccinated, with 273,428 people receiving at least the first of two required doses, state health data showed.

As Patrick Mahomes' contract grows, the Kansas City Chiefs' team-building strategies need to change. Over the past two years, the Chiefs have heavily invested in the present when building out their roster. Resulting in a Super Bowl win and another Super Bowl appearance, it's hard to argue against this strategy - up to this point.

For more stories like this one, subscribe to A People's History of Kansas City on Apple Podcasts, Spotify or Stitcher. One of the first things you should know about Henry Perry is that he was equal parts pitmaster and entrepreneur. To many, the reason for his success was simple: He knew how to smoke barbecue better than anybody.

A new shoe store is open at 55th Street and Troost Avenue. But it's not just any shoe store. It's owned, designed and operated by inner-city youth.The store is called One Pair. Its motto is that everyone deserves one pair of good shoes."We got Nike, Adidas, Jordans, even shoes you never heard of.

Fantasy Baseball: Royals players as Lord of the Rings characters

The other day I was perusing the baseball corner of the internet, as one does when one is an editor at a baseball website, and I saw the phrase "Fantasy Baseball." What the phrase meant was, you know, the activity of fantasy baseball, of accruing fake points with real players in fake games for real money.

OVERLAND PARK, Kan. - If your child doesn't know the story of Negro Leagues baseball legend John Jordan "Buck" O'Neil, a teacher in Overland Park is hoping to change that. Kristy Nerstheimer is a teacher with the Shawnee Mission School District.

Kim moved up. I will now accept her calls.

Biden Camp: Trump’s Plan on Vaccination’ Worse Than We Could Have Imagined’ White House Press Secretary Jen Psaki begrudgingly admitted during a January 25 that there was a vaccination plan they won’t give credit.

Biden staffers have lied about the plan, telling CNN there was “nothing for us to rework.”

Biden consumed his campaign last year on a platform to shut down the coronavirus, only to take it back three days after sitting in the White House, with a bold admission.

The president said on January 22, “There’s nothing we can do to change the trajectory of the pandemic in the next several months.”

"[If] I hear you treat another colleague with disrespect, talk down to someone, I promise I will fire you on the spot"


C'mon man! I was just kidding!

^^^ Please combine your b.s. into one comment. You're boring us.


You want me to buy sauce from someone who wears a dirty backward ball cap and stringy hair? Not in this lifetime.

"Get in a warm place"

Gee, thanks Katy. I would never have figured out that one.

Millions have paid into Medicare all their working life and now this fuck Biden wants to come along and rip a $25 billion chunk from Medicare. Thats bullshit!

Biden justified his administration’s goal to administer to 100 million Americans within his first 100 days in the White House when a reporter quizzed that the target was too modest.

“When I announced it, you all said it wasn’t possible. C’mon. Gimme a break, man,” the president snapped.

Major publications may have voiced skepticism over Biden’s claims, but they remain only too few.

Biden is worse than a joke, he’s an embarrassment and soon to be responsible for hundreds of thousands of deaths. He said he would save us all, he lied and people died.

The New York or Georgia state government should go ahead and bring indictments against Trump, and secure a conviction and send him to prison for a while. That should shut him up.

Typical despicable dimwit, stealing money for much needed medical programs for the elderly, it seems chyna joe with his Alzheimer’s disease is flashing back to obummers great plan of killing off the old people again.

It seems as though everything dementia joe is doing is off of his memories of his buddies from the obummer administration.

C'mon man! Don't give her immunity! I don't want to have to pardon him yet!

Meghan McCain
@MeghanMcCain
·
15h
1. I've been very hesitant to comment but since my deceased father keeps getting invoked I will say this:

John Weaver and Steve Schmidt were so despised by my Dad he made it a point to ban them from his funeral. Since 2008, no McCain would have spit on them if they were on fire.


No he wouldn't tubby. He'd suck their dicks and call them his "friends." You are fooling no one you political whore. Speaking of your pops, how's he doing in Hell?

"John Weaver and Steve Schmidt were so despised by my Dad he made it a point to ban them from his funeral. Since 2008, no McCain would have spit on them if they were on fire."

How does John McCain ban someone from his funeral if he is dead ? Did he make up a list prior to dying "These people cannot attend my funeral!!"

If McCain made such a list he must have been a total nut job.

If someone showed up to the funeral that was not on the "These people cannot attend my funeral list" were they immediately escorted by the mortician out of the funeral home. Very bizarre.

And discussing withy her attorney enforcing her prenup when her hubby is known for refusing to honor his contracts.