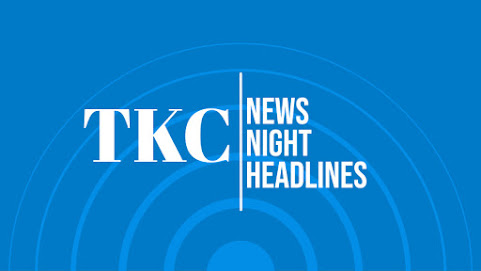 Tonight's quick peek at some of the top headlines on our mind tonight . . .

Pothole season is upon us, crews jumping from snow to road repairs

As we continue thawing out from last week's cold blast, you may start noticing an unwelcome sight more often on your daily commute - potholes.After the brutal two-week stretch of winter weather, Kansas City metro area road crews are jumping into pothole repair.In Kansas City, Missouri, public works has already received more than 400 requests through 3-1-1 to fill potholes around the city.Pothole crews have been scattered around the city this week and are getting a jump start on that work.

KANSAS CITY, Kan. - A man who died in a Sunday night car crash was found in his car Wednesday morning in Kansas City, Kansas. KCK police officers responded around 11:40 a.m. to the 6100 of Riverview Avenue to check the report of a vehicle in a creek bed, according to a police department news release.

KANSAS CITY, Mo. - The first meeting of the Kansas City Vaccination Task Force did not yield much information for the public. Members went into closed session almost as soon as the meeting started on Wednesday afternoon. What is known is that the city is partnering with both Walmart and the YMCA of Greater Kansas [...]

Why it matters: The initiative comes nearly a year after Trump administration health officials first internallyexplored whether to send masks toevery American in hopes of slowing the virus' spread - an idea that was rejected at the time. Public health experts have since pushed for reviving the concept as a way of reaching underserved communities and emphasizing the importance of mask wearing.

Liz Cheney contradicted Kevin McCarthy on whether Trump has a role with the GOP. Former President Donald Trump and his future with the GOP was the subject of an awkward clash Wednesday between two House Republican leaders.

Postmaster General Taunts Dems: You're Stuck With Me for Good

Louis DeJoy had a defiant message on Wednesday for those craving to see him ousted as U.S. Postmaster General: "Get used to me." The comment came after Rep. Jim Cooper (D-TN) asked the embattled U.S. Postal Service chief how long he would remain as Postmaster General-"long time," DeJoy spat back-during a Wednesday hearing in the House Oversight Committee.

Mitch Schwartz announces he is having surgery on Wednesday, aims to play in 2021

Kansas City Chiefs right tackle Mitch Schwartz is having surgery on Wednesday, he announced via his official Twitter account. Injury Update: I'm getting surgery today. I was hoping to recover enough to get back for playoffs/Super Bowl but that didn't happen. It's time to address the issue.

Fresh Market donates $30,000 worth of food to northeast KC groups

KANSAS CITY, Mo. - The owner of Fresh Market donated $30,000 worth of nonperishable foods to two northeast Kansas City organizations. The Gathering Table and Healing House received multiple truckloads of food on Wednesday from the grocery store. Subhi Zaben, Fresh Market manager and the owner's son, said he sees the need in his community.


Slight Warm Up Ahead

Thursday will be partly cloudy with high near 45 degrees

Hide Transcript Show Transcript TEMPERATURE TO FALL OFF. 42 IN THE NEXT HOUR. 30'S BY 7:00. BY 9:00 P.M., 35 DEGREES. TOMORROW MORNING, COOLER THAN IT WAS THIS MORNING. PARTLY TO MOSTLY CLEAR SKIES. AS MENTIONED, LITTLE WIDER. MARSHALL, 26. SAME FOR LAWRENCE. 12 HOUR FORECA, LOOKING IN THOSE 20'S, CLOSE TO FREEZING BY NINE.

Did you hear about the guy who put the sign on the Brooklyn Bridge that said "Cuomo killed my mom." The are some bitter people out there, Andrew. Very bitter.

Did you hear about the guy who put the sign on the Brooklyn Bridge that said "Cuomo killed my mom." The are some bitter people out there, Andrew. Very bitter.

Free Chinese Masks from the Chinese puppet, paid for with YOUR MONEY then to rub salt on it XIden then gives YOUR job to someone from CHINA or India with the H1b program. The CCP ass fucking rodeo is just warming up.

^^and yet Trump never cared enough to bother sending masks to his own people. So weird.

Surgery on Mitchell Swartz ... good luck man hope it goes perfect. Seems unbelievable to recover enough from back surgery to be back in form by season start protecting mahomes. Makes you wonder why waited til now to operate, must have tried other options and this is now what is needed, the city can’t sleep until we get better protection for our superstar QB