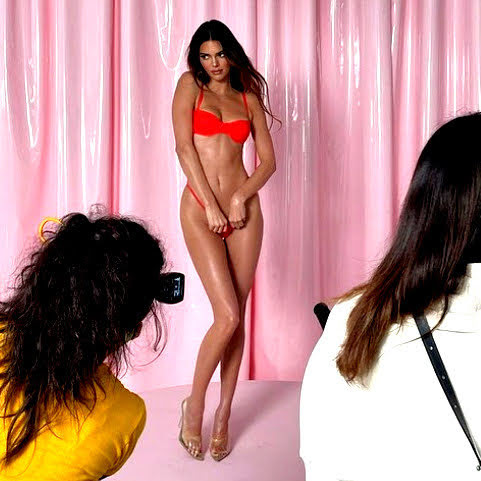 KANSAS CITY, KS (KCTV) -- The Kansas City, KS Fire Department says a fire spread from one house to another near Central Avenue on Wednesday evening. Firefighters reported to the scene of 36 S. Pyle Street in KCK on a two-alarm fire. While on scene, the fire spread from that home to a neighboring home.

KANSAS CITY, MO (KCTV) -- The police were engaged in a standoff in the 2300 block of Jarboe on Wednesday evening. The police received a 911 call from the location at 4:19 p.m. The person on that 911 call told police that there had reportedly been a shooting and multiple people had been shot.

"It's not body-shaming to tell people that Kendall is photoshopped in those pictures. Like, yes, she is sexy, but she also quite literally doesn't look like that irl." Posted on February 15, 2021, at 6:46 a.m. ET

Facebook said on Wednesday that it is preventing people inside Australia from accessing news stories on its platform. Facebook users elsewhere will not be able to view or share news stories from Australian outlets. The moves are a response to proposed legislation that would force social media platforms to pay Australian news organizations for links shared on its sites.

Following Trump's call for Republicans to move on from McConnell, POLITICO on Wednesday reached out to all 16 Republican senators running for reelection in 2022 to ask if they supported the Kentuckian as majority leader. Only two responded. "Leader McConnell has my full support and confidence," Sen. John Thune (R-S.D.), the No.

AOC hits Biden on $50K student debt, says Schumer has her back

New York progressive Rep. Alexandria Ocasio-Cortez took on President Biden Wednesday after he flatly rejected her proposal to forgive $50,000 in student debt per person. Ocasio-Cortez, a far-left Democrat who represents parts of the Bronx and Queens, noted that even Senate Majority Leader Chuck Schumer backs her idea.

Happy Wednesday and welcome to Overnight Defense. I'm Ellen Mitchell, and here's your nightly guide to the latest developments at the Pentagon, on Capitol Hill and beyond. CLICK HERE to subscribe to the newsletter. THE TOPLINE: A high-ranking military official on Wednesday said that a third of service members have declined to receive the coronavirus vaccine .

Kanye West Is 'Not Doing Well' Amid Split from Kim Kardashian: 'He Knows What He Is Losing' Says Source

The rapper has had limited contact with his estranged wife and kids By all accounts, Kim Kardashian and estranged husband Kanye West are heading towards divorce - and a source close to the rapper tells PEOPLE that he is struggling as reality sets in.


New Honcho Debuts On The Nice Side Of The Bridge

Newly-elected Clay County Sheriff Will Akin is not new to the sheriff's office, where he has worked for years. He's lived in the area since Dec. 1, 2012, but he shared glimpses of a much longer journey, growing up in California, with 41 Action News.

KANSAS CITY, Mo. - Heart to Heart International is partnering with the Johnson County Department of Health and Environment to screen volunteers who will administer COVID-19 vaccines. "The scale of this phenomenon is unlike anything we have seen," Brian Sink, vice president of volunteerism and staffing engagement for Heart to Heart International, said.

Thursday's high will climb to about 22 degrees

Hide Transcript Show Transcript SNOW AND STILL SOME FLURRIES ARE OUT THERE, BUT AS WE ARE CLEARING OUT FROM THE CLOUDS, NOW WE HAVE TO FOCUS OUR ATTENTION ON THE TEMPERATURE TREND, THAT WILL GO DOWN FROM THE UPPER TEENS TO THE LOWER TEENS TO NEAR 10 BY MIDNIGHT OR SO.

You had better conserve more than energy during this cold blast. Bill Gates, Kamala Harris and Joe Biden have said they want Americans to eat less beef and eat synthetic beef. Due to the pipeline closing down gas has gone up and the domino effects are starting. Farmers are saying their beef will go sky high because of feed and hay going way up. Chicken and eggs will go up along with milk. Thanks democrats we will be starving just like the Chinese. Oh and did you hear Biden say minorities aren't smart enough to get on line????? You people are really really stupid.
2/17/21, 9:53 PM

H & R Bloch said…
The student debt problem can be easily solved. Have the person that is responsible for the debt join a program to allow them to select how much of their debt they wish to cancel from $0.00 to $250,000. Then send them a 1099-Gov to add it to their tax return as income, since they did receive the money and thus it was income. Then they can pay the tax on that income. Or then they could just pay off the student loan. Simple. The bank writes off the debt and the government reaps the reward. The American taxpayer is off the hook for these deadbeats.
2/17/21, 10:34 PM

Banks got out of the student loan business ten plus years ago as it was a money loser for them.

Federal Student Loan program is why tuition skyrocketed as the government once again screwed up the supply and demand of funds like they did with the home mortgages back in the '90's up to 2007 with FNMA and FMAC.

Public Universities scammed the taxpayer and students with double digit % increases in tuition as the universities knew the students would just borrow more money from the Fed who basically had no limits on the loans.

The banks got out of the student loan business as they wisely saw; student's future incomes would not pay for the over-inflated tuition related loans.
2/18/21, 7:48 AM

Anonymous said…
Of the many problems with the student loan program, maybe the biggest is it is not risk related. The same terms are available regardless of the likelihood that the borrower will ever pay back the loan. Grievance studies and journalism majors get the same interest rate as engineering majors, although their job prospects and earnings potential are quite dissimilar.

Any program to delete student loan debt must involve the colleges and universities, which conveniently looked the other way while students were burying themselves in debt.
2/18/21, 8:49 AM

Anonymous said…
That Kendall is pretty but needs to eat some cheeseburgers,be o bony rack to ride
2/18/21, 9:18 AM

D﻿﻿﻿﻿﻿﻿卐﻿﻿﻿﻿﻿﻿M﻿﻿﻿﻿﻿﻿☭﻿﻿﻿﻿﻿﻿CRATs LIE said…
So let me get this straight... we have a Resident Asterisk with dementia, an ex call girl acting as VP, a transvestite as head of HHS, an child molesting crack head's buddy as head of the DEA and his other buddy is head of the DOJ. They guy who was banging the Chinese spy is now with Homeland Security and we are borrowing all of the money that we don't print from China. Hundreds of thousands of illegal immigrants are coming in for our jobs, Social Security and every other bennie that they can get. Congress's focus was on impeaching a President that isn't President anymore which they failed miserably at and unemployment is 6.3% but Resident Asterisk claims that he is pro-America. You can't make this shit up! It's like shooting fish in a barrel!
2/18/21, 9:33 AM

HAHAHAHAHA!!! said…
One afternoon, an armed thief entered a house and found two people there.

He tied up the woman and ordered the man at gunpoint to hand over the family's jewelry and other valuables.

The frightened man started sobbing, and said, “You can take anything
you want, and even beat me, but please untie the rope and free her.”

“You must really love your wife!”

Bandit said…
Had a YUGE generator installed when I moved out of the shithole known as Kansas City. Play your power games. Was ready for it before it became an issue. Doesn't bother me at all.
2/18/21, 11:34 AM