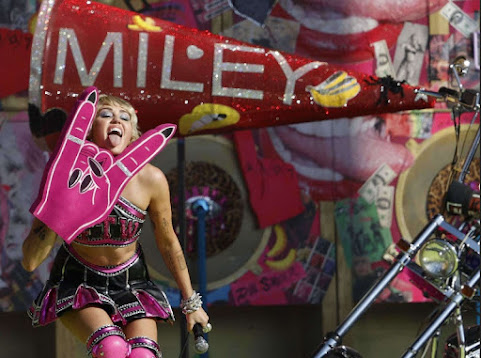 It turns out Miley and her hottie goodness won the Super Bowl that most people watched online (or not at all). Accordingly, this inspires us to check pop culture, community news and top headlines.

It's been a cold week but temperatures this weekend are expected to be even colder---when restaurants like Ragazza Food and Wine are filling up reservations for a busy Valentine's Day weekend. "It's gonna be night and day from valentine's day last year," said Laura Norris, owner of Ragazza.

KANSAS CITY, Mo. - Below freezing temperatures and dangerous roads kept many students across the metro out of school Tuesday, and it may keep them out on Wednesday too. Many districts are using AMI (alternative methods of instruction) days instead of calling a snow day.

But, for the record, Miley is perfectly happy being single. She proved it by posting a Hannah Montana throwback clip where teen Miley says, "I have no problem not having a boyfriend," before cutting to footage from her TikTok Tailgate show in which she told the crowd, "I'm single now, you know, after COVID I'm ready."

As the second impeachment trial of his presidency unfolds, there's another bit of bad news for the former president. In a new interview on CNBC's Squawk Box, Twitter Chief Financial Officer Ned Segal gave the decisive word on how the company would handle Trump's Twitter account lo...

After inflaming political discourse around the globe, Facebook is trying to turn down the temperature. The social network announced on Wednesday that it had started changing its algorithm to reduce the political content in users' news feeds.

Wendy Borger tested positive for Covid-19 at an urgent care center in Palmerton, Pennsylvania, on Dec. 28. She said she was fatigued, short of breath, and had a headache, heart palpitations and a fever of 103 degrees Fahrenheit. Her oxygen level dipped to 94%.

Biden's in no rush to engage China. Guess who's trying to take advantage.

The worry, some former officials say, is that Biden is just getting organized while Xi is seizing the moment: ramming through a massive investment deal with the European Union, for instance, that aims to cement ties with the 27-country bloc.


More Cash Or Nothing

Democrats on the House Committee on Education and Labor approved a $15 federal minimum wage proposal included in President Biden's coronavirus relief package in the early hours of Wednesday morning. "It's a wrap, $15 #MinimumWage passes the [Education and Labor] committee after more than 13 hours of debate," committee member Rep.

Bruce Springsteen was arrested for DWI and reckless driving in his home state, it was revealed Wednesday - days after he appeared in a much-hyped Super Bowl commercial for Jeep. The "Born to Run" icon, 71, was busted Nov. 14 at Gateway National Recreation Area in Sandy Hook, New Jersey, a spokesperson for the National Park Service said.

NFL Power Rankings: Buccaneers reign over Chiefs! Where do Saints, Steelers go from here? | NFL.com Super Bowl LV will be remembered, in part, as the day we learned Patrick Mahomes wasn't invincible.

KANSAS CITY, Mo. - The Kansas City, Kansas, Public Schools Board of Education voted Tuesday night to approve an intramural sports plan for district middle schools. The programs begin April 19 with track and field and boys and girls soccer, according to a tweet from the district.

Today is a Storm Track 5 Weather Alert Day. We are tracking a 30% chance for light snow and patchy freezing drizzle for your Wednesday. Amounts of winter weather today will be light but could be impactful with additional travel impacts. High temperatures today are expected near 15.

Tom MacDonald - "Cancelled" is the song of the day and this is the OPEN THREAD for right now.