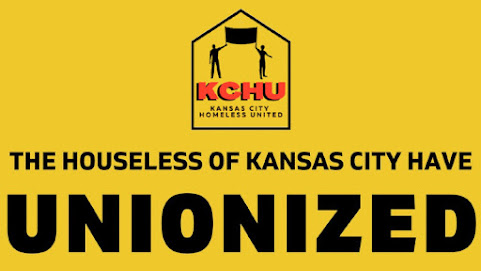 Earlier this month, local homeless advocates kicked off yet another "occupation" of city hall without much fanfare.

Here's a link and tonight's testimony advocating for denizens of local streets with a name check that might be familiar to longtime news-watchers . . .

Qadafi, who goes only by his first name, is the spokesperson for the Kansas City Homeless Union. He said people experiencing homelessness do not have a seat at the table, and they're fed up with city officials making decisions for them without their input.

"The best approach is a direct approach," Qadafi said. "We can form our own union and deal with people directly."

The group wrote out their demands, including one solution that would use funding to buy Land Bank homes for transitional and permanent housing and employ people without homes to bring those properties up to code.

"This is a city problem, and it can be fixed with the same money that they passing around with they friends, hooking them up with a program," Qadafi said. "People don't even know us, they don't even talk to us."

They also call for more places to simply take showers and wash their clothes.

"There's no water fountain to sanitize during a pandemic. There's no place for us to go take a bath," Qadafi said. "The city bragged about them providing over 700 porta potties for the Super Bowl parade last year, but during a pandemic, they have none nowhere."

I thought Hillary came she saw he died dealing with Qadafi. Had a knife up the keyster issue. Then she left the gay ambassador and several Marines there to die without help. Typical Karencratic foreign policy.

How much are the dues for a homeless union?


It's will be with some small degree of satisfaction to watch, when the “woke” gen xyz'ers finally

figure out just how badly they fucked themselves. And, what their vote “against Trump” means.

Of course, there's no real cure for TDS, so most will prob still blame Trump four years down the

The Biden sleazeballs are gonna tax anything that moves and most things that don't, to the hilt.

They have no choice!

across the border, willing to work for pennies to cash in on the democrapic free manna from

money printing will do to their dollars.

“Unity”? None of the drawbacks will even touch Pelosi, Hunter, John (Swift-boat, horse faced)


the new Tenants Union will strike! By not paying their rent!

Why so your paragraphs

in such weird places? It makes you

Kudos to Khadavi for stepping up for the homeless community! Too bad that you classism cheeseballs are too busy looking down on those in less desirable situations. Pray you’re never in they’re shoes.

I admire their statements in their words but do they have a plan? There's more to advocating for the homeless then just making bombastic statements or setting up a few tents. I wish this group success because we need more advocates for the less fortunate but we need them to come up with solid policy decisions and not just rhetoric.

Free stuff is the plan!

It's too cold for this boosheet. Let the people have shelter. Give them what they need to survive. Do the right thing!

Hey, if these homeless morons can organize a union to be homeless bums, then they can go get a fucking job and work. And buy a house. So they have a place to shit, shower, wash clothes, and stay out of the awful cold. Most of us working stiffs go to work so we can live and eat indoors. These homeless vermin are just criminals and insane who can't function as normal human beings.

I heard forming a tent city in front of city hall is a good way to be heard. Thank me later, Stacy shaw.

What would Jesus do?

I've read that he helped the poor. He fed the poor and he healed them. He was compassionate to the poor. That seems like a good example to follow.

English tutors will also be supplied.

KILLING PEOPLE OVER FIREWOOD SOUNDS LIKE 1930s POLAND WHATS NEXT

310 Liberals kill babies and rape little girls what do they know or want to know about Jesus.

Is the fire union going to picket with them?

HOW MUCH IS UNION DUES AND CAN I PAY WITH EBT.

WHAT A JOKE MILKDUD IS PULLING ON YOU STUPID STUPID LIBTARDS

CLOWARD AND PIVEN READ ABOUT IT DICKHEADS

Tell ya what Momar, go on strike. That will show us!

"The city bragged about them providing over 700 porta potties for the Super Bowl parade last year, but during a pandemic, they have none nowhere."

That's because you don't leave outhouses sitting around 24/7 dumbass!

Look for the union homeless
when Lucas is proving that he's a louse.

Remember somewhere our union's mooching,
your wages, taxes and everything else.

We work hard not to work, but who's complaining?
Thanks to the the suckers that are paying our way!

So always look for the union homeless,
we're able to sponge for a living in the U.S.A.!

Qadafi seems to think the city has a duty to support bums. The more free stuff the city gives them, the more bums it attracts. Benign neglect is the better policy.

Well no shit they don't have a seat at the table,silly fucker dont have a house either

Put them in tbe power and light and jazz museum.