Recent KCPD push back against illegal sideshow street takeovers organized via social media have resonated across the metro.

The message seems pretty clear that KCPD is getting serious about enforcement before warmer weather allows the trend to pick up momentum.

A worthwhile comment from a TKC reader offers perspective on the coverage so far . . .

"Interesting how all of the local media outlets seem to have deliberately left out the part from PDs presser about how two people were shot related to last night’s events.

"It’s very apparent that they are doing their best to shape the narrative by minimizing the side shows as just gatherings of people who want to have fun when there have been so many shootings related to them in the last year." 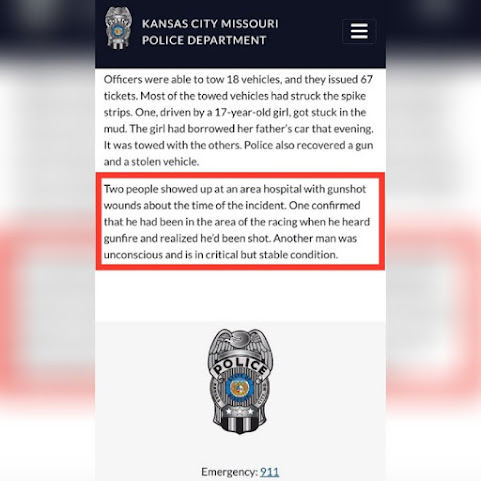 Accordingly, we notice law enforcement putting the word out regarding the new tactic.

Reality check: Things are going to get tougher for illegal Kansas City sideshows from now on . . .

KCPD on illegal street racing: 'We want it to stop'

The message is important if only to avoid further conflict, protect innocent people riding along and so that illicit drivers can't say that they weren't warned.

I hope they are successful. The downtown side shows are stupid. Just brazen and dangerous for people who get caught in the middle of them without knowing.

It's not all doom and gloom.

Confiscate the cars and I'm sure that KCMO could turn a tidy profit by selling all of these souped up vehicles.

You can be sure that there is a long list of excuses as to why it's perfectly OK for certain people to race cars on public streets, shoot others, and throw bricks at police cars from overpasses.
We've all heard most of those excuses for other destructive, dysfunctional, irresponsible, illegal, and murderous behavior for years.
And Lucas is working hard to make even more counter-productive and anti-social behaviors OK with KCMO government.
And just keep in mind that everything bad that happens to these folks is really everyone else's fault.

Mayor lickass owns the media by giving them all tax money so he can control the narrative of his socialist views.

George Soros is behind it all. And lots of drugs are also sold at these events.

Hey local news . You are failing to report the news. Why? Now all you seem to report is a bunch of puffy, Buffy, mahomie,royals bullshit.


Speaking of George Soros Joe Biden just purchased a multi million dollar mansion next to George Soros and close the the Chinese embassy. Imagine that.

Did anyone hear the latest Joe Biden statement? He said minorities are not smart enough to use the internet. And to think you idiots voted for him and you call people like me a racist.

To all police officers in the city. The only thing these people understand is choke holds and bullets. Please use both we've got your back. We the people are sick of this crap. Use force and use deadly force. Screw George Floyd.

Why don’t they go after all the murderers in the shithole ghetto as aggressively as they are the side show punk bitches?

No better example. Where is all the BLM money ? Scholarships ? Food banks ? Legal aid ? Small business loans ? They ripped you off everyone that contributed to that shell for the Karencratic party organization.

they are going to legalize sideshows

LIBERALS RAPE AND KILL TOO MUCH

Once again the media reports this as a we problem, no it's a them problem. Name the demographic and stop THEM. Simple.

170 murders in KC who committed them

^^people. People committed them. Just like they do everywhere, everyday in this country. Hope that helped!

Close the metro area racetrack for soccer fields that were never built. Build a multi million dollar soccer complex up north. This aint the fields of fuckin dreams. NOBODY SHOWIN UP FOR SOCCER.

Kansas City brought this on themselves. I have ZERO sympathy. 🤣🍿🥨

^^You also have ZERO brains.

10:03 You ommited the demographic of the "people" commiting the disproportionate amount of crimes and murders. Narrow it down to specifics, name them and focus on them.
Drug dealers use Musinex D to make illegal drugs. I don't but I have to jump through hoops to get this decongestant because drug dealers are not singled out but are just "people" and all other innocent people are affected by their actions.
Focus on the source of any ptoblem, publicly acknowledge and address it surgically.
Grouping systemic criminals as just people is lazy.