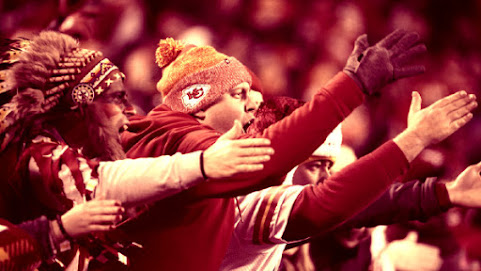 A longtime Kansas City football tradition now confronts its most serious challenge in the aftermath of a divisive election season and amid a broader crackdown in discourse online and in pandemic-restricted public spaces.

Consider . . . With fewer fans on site, this time around, advocacy against Native American imagery and references could very well prove successful given that the NFL has aligned with the Black Lives Matter movement and sports brands like Nike were among the first to openly oppose Prez Trump.

A coalition of Native American groups has put up billboards in the Kansas City area to protest the tomahawk chop and Chiefs' name. A protest is planned outside Raymond James Stadium in Tampa, site of Sunday's game against the Tampa Bay Buccaneers, and the coalition has hired a plane to fly around the area. A few thousand people have signed onto two online petitions, one of them started by a fourth-grader.

The Chiefs made some changes in the fall, barring headdresses and war paint and making a subtle alteration to the chop, with cheerleaders using a closed fist instead of an open palm to signal the beating of a drum.

KCUR: Amid The Kansas City Chiefs' Success, There Are Still Concerns About Its Controversial Traditions

KMBC: Chiefs under pressure to ditch the tomahawk chop celebration

ESPN: Pressure is mounting for the Super Bowl-bound Kansas City Chiefs to abandon a popular tradition in which fans break into a "war chant" while making a chopping hand motion designed to mimic the Native American tomahawk.

Might as well eliminate the fans altogether. Just tell them to leave their pin number and an apology note.

They already have eliminated most of the fans.

It was stupid and unoriginal 20 years ago when we copied it from Florida State and the Atlanta Braves. Has anyone but the dullards who spend 30% of annual income on Chiefs tickets done the chop in the last 10 years?

You were stupid and unoriginal twenty years ago so....

I have other plans. No time or interest in the Stupid Bowl.

What's a national event that I will be ignoring?

The chop is nothing more than another nazi salute.

About a harmless tradition

So may geezers saying they have other things to do, but you sure as hell have time to post about the Chiefs. Who are you fooling? You fucktards will watch. You know it, I know it, everybody knows it!

I'll be tickled to death to post about their loss.


yet more Democrap "activist" B S ..99% of Native Americans could give a fuck..

They allow that in the zoo? Weird.

You're as ignorant of Nazis as you are everything else.

Keep whining Angela or should I say Karen. Time to grow up little girl.

Basement Biden just signed an Executive Order that no one is allowed to raise their hands higher than than their heads unless you're being arrested and placed in a train car to go to one of the the newly opened Demoncrapic Reeducation Centers for people who don't agree with what they think.

Everything is racist you guys! Especially effective labels for dummies of any race!

Chop til you drop. What are all the politically correct pussies going to do about it? They are effeminate homosexuals.

We need to erase all references to America indians to combat racism.

Let's just erase all American Indians instead. The Democrats were for that the first time.

Ultra White Missouri and Kansas City won’t stop their racist agenda - no matter how guilty they are. Remember, we’re a red state where MAWA is the accepted standard applied to nearly everything.

^^Meanwhile squishy Marxist lilly white metroxexual Democrats that live in their grandmother's basement and walk around in her granny panties want to Make America California Again.

Chimpboi does have an unhealthy attraction to his grandmother but then most psychopaths do that kind of thing. They also wet the bed, burn things and are cruel to animals.

No Black or Mexican person has ever done the chop you guys!!

No one do the Tomahawk Chop at the superbowl, please. AOC might hallucinate that she's been chopped to bits by the whole Sioux nation.

Chiefs should hold strong, this cancellation crap needs to come to an end. What's going to happen is this will turn on the libs in a very big way and they will lose in an even bigger way....

Replace the Chop with the Fart.

Everyone load up on chili before the game; and then all 70,000 fans fart at the same time during key moments of the game.

^^70,000 fans drop their drawers and face their butt cheeks towards the field then let out a real loud Fart.

Would be great for NFL broadcasts.

Mimicking is not mocking. Its football fans pretending they're going to battle. It might be a little goofy, but it's not disrespectful in the slightest.

Since we conquered their dumb asses, Indians do not get to tell us to stop anything we do.

Never underestimate what a cunt Clark Hunt is.

Good idea. However, it might traumatize AOC, who would afterwards claim to have suffered chemical attack in the First Battle of Ypres.

I once watched Ted Turner and his traitor wife Jane Fonda doing the Chop at an Atlanta game.

Replace the chopping motion with a scalping motion. That would be more historically accurate.

Poor, poor butt hurt Angela at 12:29. SJW of course. See ya at the next (nice weather) protest dear. JOCO perhaps???