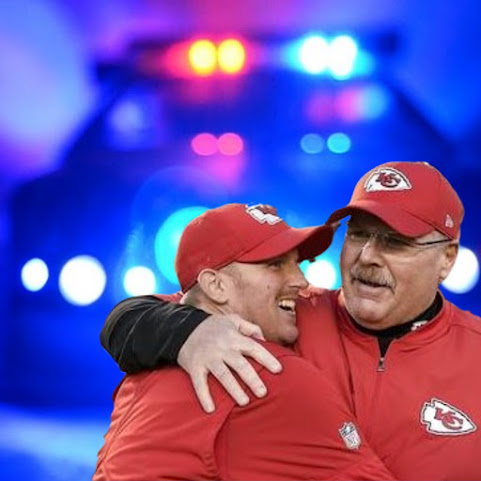 Kansas City footbal fans are looking to the Chiefs to do the right thing after this column goes viral and paints the Super Bowl losers as the bad guy.

"By now, either the Reid family, who have made tens of millions coaching in the NFL, or the Hunt family, billionaires who own the Chiefs, should have stepped up and said they would cover all costs. As of midday Monday, the Miller family said they haven’t heard from either party.

"At the very least, one of the Chiefs’ employees, a nepotism hire with a history of legal and substance abuse problems, had a couple drinks and destroyed this family's life. At worst, this is a DUI case with significant questions hanging over it, most notably: Was Britt Reid drinking inside the team’s offices and who, if anyone, knew about it?"

KCTV5: Search Warrant - Investigators will examine Britt Reid’s cell phone to determine if it was used around time of crash

BL: What Do You Make of Chris Berman's Attempt to Tackle the Potential Impact of the Britt Reid Situation?

Anonymous said…
not a chance.

The salary cap prevents it.

Mc said…
What does Mayor Q think? Seems like he's been pretty silent since his Tampa trip. Not even a sunset tweet today.

Anonymous said…
He's still in Florida..In a motel.. On his knees..paying off his bets

3rd said…
Think about it logically. Of course the Chiefs need to do something to overcome this horrible incident. Or else it will haunt them into next season. But, you really have to look beyond the one car crash and get a better picture of the team overall. They have had substance abuse issues for decades. Even one of their biggest stars died of drinking related death. It would be good for the community and for the team for them to think about their own alcohol related issues and how that impacts the community overall.
2/8/21, 11:41 PM

Anonymous said…
Andy Reid has been covering for his son's substance abuse issues for decades too. It started before the Chiefs hired him and will continue after they fire him.
2/9/21, 12:03 AM

Anonymous said…
Shame on the Chiefs for allowing the degenerate son of Andy Reid to drink at his job at the Chiefs Complex and then get in a car (drunk) and do this damage to this innocent family. The Chiefs have not stepped up to the plate. The people of the United States stood up and donated $350k+ to the Go Fund Me for the family. Do not expect the Chiefs to step in and help this family...they are blowing their dough on expensive contracts for Mahomes (who did not earn his paycheck in the final game of this season) and to fund the salary of Andy Reid's alcoholic son. The Chiefs suck as an organization!!
2/9/21, 1:08 AM

Anonymous said…
1:08, why don’t we wait and see what the facts are. So far it’s been speculation that he drank at the stadium.

Facts vs fiction and this wild “let’s attack the organization” before the true facts are known.....shameful on your part
2/9/21, 1:23 AM

Anonymous said…
It sounds like Reid's son was drinking at the stadium which will not bode well for the Chiefs.
2/9/21, 2:18 AM

They shouldn't be under pressure they should do it out of the kindness of their heart. But we all know they don't have a heart. Patrick Mahomes being the greatest hypocrite. Stupid drunks this little girl is on your head.
2/9/21, 5:55 AM

Anonymous said…
What's shameful is reflexively defending this organization while a little girl lies injured in the hospital. Your sports games just aren't that important.
2/9/21, 6:07 AM

Anonymous said…
If the Chiefs, their players, or the organization had any character at all, they would be out front trying to do something for this family instead of sneering in commercials.
2/9/21, 6:09 AM

All of this "The Chiefs as an organization should make the family a millionaire" is just over-the-top emotional bullshit.
Typical of our sick country.
2/9/21, 6:44 AM

Anonymous said…
This "over the top emotional bullshit" is the way you liberals like to play things 6:44. Shoe's on the other foot now. Told you that the monster would eat yours soon. Enjoy!
2/9/21, 7:00 AM

Anonymous said…
There are those of us that used to enjoy football until you people started tearing it down. Now we don't care if it is totally destroyed because we are no longer interested in it. GO CHIEFS LOL! Have fun at the parade k?
2/9/21, 7:08 AM

Karma said…
7:00 is just pissed because it's not over-the-top politically correct emotional bullshit. It has to do with morals which is a concept that his never has and never will understand.
2/9/21, 7:26 AM

Anonymous said…
Reid/Chiefs/Driver can't say a thing due to legal ramifications. Chiefs can't pay bills because it implies some type of guilt. Clark got the lawyers to defend the team....Andy got lawyers to defend his son ....it will end up in court and hopefully the young girl survives. Andy's son will be serving 15-20 years in prison as its his second infraction. We do not know if he was even under the influence at the time or the situattion at the scene. The story will come out and as always the lawyers will be the only real winners!
2/9/21, 7:52 AM

Karma said…
Sorry 7:52. You are no longer entitled to due process. Court of public opinion is all that's necessary. Them's the rules. Libs say so. Learn to love it. They'll get to you eventually.
2/9/21, 8:01 AM

Anonymous said…
In the end the Chiefs are going to end up paying the freight on this. There is no reason for them to lawyer up if he wasn't using and boozing on the job at Arrowhead. Dad knew and they did too.
2/9/21, 8:11 AM

Anonymous said…
How about firing Andy Reid and hiring that offensive coordinator everyone keeps talking about? Mahomes is why we win, not Reid.
2/9/21, 8:59 AM

Anonymous said…
The girl's medical bills will be paid by Britt Reid's auto liability insurer. Nobody knows at this point whether the girl will need future medical care, but the insurer is going to be on the hook for that too. The girl, through her guardian, will be suing one and all for pain and suffering damages, and likely will come away with a generous settlement.

So specifically what is the Go Fund Me fund supposed to fund?

Anonymous said…
A wall and 25,000 National Guardsmen need to ring Arrowhead Stadium to protect the public !

I don't want to live in a country where a business or corporation is responsible for the criminal/illegal/stupid/dangerous activity of its employees when they are not at work. Walmart, Taco Bell, gas stations and Bail bondsmen would have to shut down due to lawsuits against their employees.
2/9/21, 12:29 PM

Anonymous said…
Why don’t you guys just zip it! Have you ever thought that maybe it’s not your business? That maybe they are handling things in a mature, private way. And if you are a parent then you should know that you can’t control what your kids do when they become adults! Forever a Chiefs fan, unless Tom “entitled” Brady becomes QB and then NOT anymore!
2/9/21, 2:06 PM