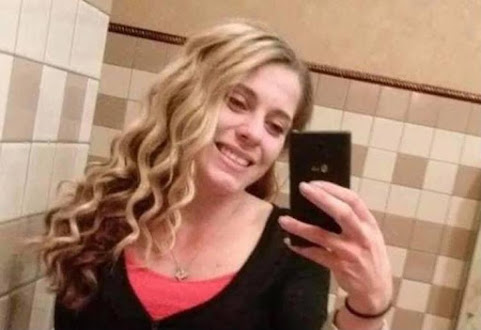 Mugshots are old & busted, social media pix shared by authorities and MSM are the new hotness.

In fairness, it's likely that domestic drama testimony will likely serve to avoid any jail time.

According to court records, family members of the victim told Jackson County Sheriff’s deputies that they were at Inner City Fire on Blue Ridge Boulevard in Kansas City when they heard someone banging on the door.

They saw the defendant was outside. She screamed, “I shot him. I shot him.” Deputies found the victim, Zachary Jewell, outside Inner City Fire. Emergency personnel attempted to resuscitate the victim. He has been shot. He was pronounced deceased later at a hospital.

KCTV5: 'I shot him. I shot him': Woman, 27, charged in Jackson County fatal shooting


Don't you think saying she was a white women was a little racist. Come on man.

^^^
I would also add that showing her mug shot is racist and borderline sexist.

Need to know the pronouns first - that could be a dude.

She’ll be out in no time. She’s got the complexion for the protection. She had to kill him. She’ll get away with murder. The rules don’t apply to her. She’s a pretty little damsel in distress. Blah, blah, blah, blah.

Nothing says "Class" like a selfie in a toilet.

2:35 has some sort of point - over at my side of the state line if one has tried saying i want no argument or has tried everything possible to avoid getting beat up or worse they can shoot in self defense. hope she had a permit.

more than likely though, she had a gun and wanted to see of it would work just like on t.v.

They should add on 5 years for the "bathroom" selfie.

Ppl really got the nerve ..A promising young man was killed in all this, regardless of color or gender she shoot and killed a YOUNG MAN .
IF YOU DO YOUR HOME WORK , YOU WOULD SEE YHATS SHE got away with murder before this a few yrs ago .. she deserves life in prison without parole . Cecil Hensley
Was the mans name , i do recall .. hopefully justice will be severed and we never see her face again .. RIP ZACHARY W JEWELLS
FLY HIGH ... WILL NEVER BE THE SAME WITHOUT YOU ..
143

He wouldnt shoot her ! Shes a monster.. theres no excuse for ignorance if she was so worried she would not have been banging on his door .