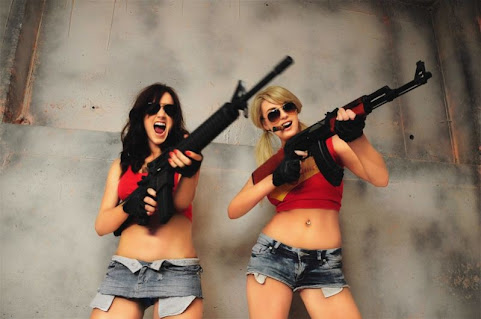 Judging only by stats, violent crime committed with firearms is a tragic endeavor mostly dominated by dudes.

However, lately we've noticed women at the forefront of Kansas City metro gun violence. For better and worse, desperate ladies are now taking up arms.

A couple of examples that might not be as glamorous as Rosie Jones & her hottie pal Stacey pictured above but strike far closer to home . . . Read more:

Kansas City woman charged following string of bank robberies -- Watkins entered the Central Bank on Feb. 1 and handed a bank teller a note that, according to court documents, read, "Hand over all the money, and I won't shoot." That day, Watkins escaped with a little more than $1,800. The following day, Watkins entered the Capitol Federal Saving branch and presented a similar note. This time the note read, "Hand me all the money, or I will shoot." Watkins left the bank with $971.

24-year-old woman charged in connection with Raytown homicide -- The victim had called police ad told them that his girlfriend had a gun and said, "She's trying to kill me." She told detectives that he told her not to shoot, but she fired one shot and he fell to the floor. He then said, "I'm dead. I'm dead."


It will only get worse.

ITS TRUMPS AND THE AMISH WHITE MANS FAULT

Where I live everyone has ten guns and don’t kill everyone but in these liberal cities liberals kill all the time.

okay, the woman who robbed the bank was white and did it out in a red state country.

Sorry Chumpsters, your reasoning is STOOOPID.

Get a clue. The crime is among your own. Just like the traitors who rioted at the capitol.

7:32 so desperate and what if she was white, she didn’t shoot or harm anybody. Now the kolored girls of killer kc shoot to kill and they’re damn good at it. The recent murder in raytown proves that.

The koloreds murder a thousand times more than whitey does. Fact.

There is plenty of room in prison for all you criminals. Enjoy your stay, where you lose all your rights while I enjoy freedom and happiness for being good.

Black women in killa shitty have been using guns, knives, fire, poison and cars for decades to murder people.

I’d like to screw that Rosie Jones real deep and hard, all night long.

^^but since you're a convicted sex offender, you can't. Oh well.