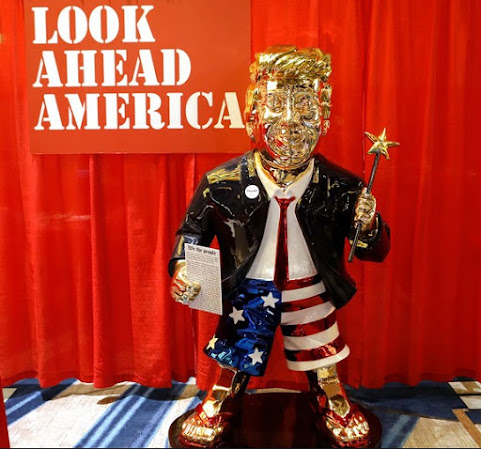 The remarks of the former Commander-In-Chief are important for Kansas City because this cowtown is a Democratic Party enclave in the midst of two overwhelmingly Repbulican dominated red states.

Context . . . Remember that Kansas hasn't elected a Democratic Party Senator since the 1930s and last election every Missouri Democratic Party candidate was defeated by a wide margin even as Prez Trump played the role of Boogeyman on national TV & most cable news networks. No matter how readers might feel about this reality, it is a fact of local political life.

The antics of the obese former Prez & former TV game show host remain of importance to the political fate of both Missouri, Kansas and the nation . . .

For roughly 90 minutes, Trump chastised "top establishment Republicans," "RINO's" and other Republicans who have criticized him. Banned from Twitter, he said Big Tech companies "should be punished with major sanctions whenever they silence conservative voices."

At CPAC Trump Claims GOP as His Own, Names Blacklist of Republicans Against Him

The twice-impeached former president made his first public appearance since leaving office. On Sunday, Trump was the main speaker at the annual Conservative Political Action Conference ( CPAC). And according to a Fox News commentator, the event had the cult-like, MAGA hat-wearing attendees calling it TPAC instead of CPAC, because of their seeming undying devotion to him.

Trump's Future Agenda: Suppress the Vote and Purge the RINOs

Trump's CPAC speech kept the door open to a 2024 candidacy, but more importantly made restoration of his agenda and a harsh attack on the voting rights he blames for his defeat, has become obligatory, with RINOs facing his wrath.

Former President Trump is delivering his keynote address at the Conservative Political Action Conference (CPAC) on Sunday -- a finale to the annual conference which sees Trump make his first major speech since leaving office.

Donald Trump hints at run for president in 2024 - video

Former US president Donald Trump has hinted at a possible run for president again in 2024 during a speech at the Conservative Political Action Conference [CPAC] in Florida. Trump attacked president Joe Biden and repeated his fraudulent claims that he won the 2020 election in his first major appearance since leaving the White House nearly six weeks ago.

And the libtards heads are exploding! Hahahahaha!

Fake news. He is not back! But he's in the 3 year period that the average man his age dies. Odds are he will not be alive in the beginning of 2024. People die from natural causes all the time. Even young people and athletes die in the sleep.

If you really think he will be around in 2024, given his obese nature, stress, future stress of tax charges and a divorce you are a fool. Dead man walking!!

You lost MAGATS. Get over it. Dear Leader will soon be in Leavenworth. It's coming, traitors...

Trump is in HUGE trouble! He overstated all his real estate to get loans against them - then grossly under stated them for tax purposes. Thats banking fraud and criminal Federal Tax law violations.

He will get 20 years in prison. He will be in jail by years end. 4 years of pent up hate by the Southern District of NY's attorney general is coming for Trump and his skanky kids. JAIL TIME!

The only state of the union speech you will hear this year. Special Ed Joe cannot give on and Cameltoe has a different type of union going on in her mouth.

Ron DeSantis will be supported by Donald Trump and will become our president in 2024, after Basement Biden tanks the economy, destroys our borders, increases the cost of gas and food, and starts hyperinflation because of Demoncrapic socialist policies.

The most bizarre thing about the Cult of Trump is how unworthy he is of such worship.

It looks like Republicans have all lost their minds.

He lied to them at CPAC & they don't care.

Yea, people don't like it when a man stands up for America and takes unemployment levels down to record levels, makes the U.S. military stronger than ever, lowers taxes and keeps gas prices down because of his policies. It's horrible when that happens.

Donald J. Trump and his management expertise laid the groundwork for the highly successful Operation Warp Speed to create a vaccine in record time. He handed it off to Basement Biden, who has hardly lifted a finger to increase vaccinations across the country. The local authorities are doing the heavy lifting. Thanks to Trump and now local authorities, Americans are recovering from the pandemic. All the while, the people who started the virus, the ChiComs, are full of glee after their favorite idiot and senile buddy becomes president.

If you don't like it, or him, that's okay. That is your right.

Just be honest enough to have a valid reason, rather than merely repeating what others say.

desantis is practical and a good manager in florida.

Maybe not. He s dad lived to late 90s. Yes those things u list would distress you and me and put us in the grave early, but for trump, his praise addiction will keep him going a long time

His list of policy wishes ... reigning in Big Tech LOL no you won’t. You had a chance and you didn’t. Just talk. You used Big Tech to buy ads and assemble a big rally which you sicced on the people’s house.

You'd better get that next impeachment warmed up Democrats. He's not going away like you though he would.

"Trump = 3 bankruptcies, 2 divorces, 2 rape allegations, 3,000 civil lawsuits, 2 impeachments, 1 news conference at 4 seasons lawn and garden." and still 10,000 times more successful than you will ever be in your life 12:10 which explains why you are so bitter.

And you are still a failure.

Who cares if the blowhard comes back. He'll lose another election. He's a three-time loser of the popular vote. He's a loser, Yuggeeee loser!