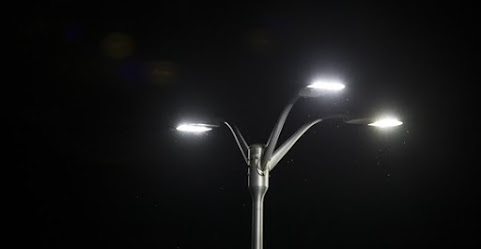 The night sky will grow even more polluted inside city limits as 12th & Oak struggles to save cash despite public health risks.

Check a bit municipal hype that has been heretofore unchecked .  ..

KCMO residents will soon have higher quality street lighting at a lower cost. The City of Kansas City is seeking to replace nearly 90,000 streetlights with modern LED lights that will reduce energy and maintenance costs, lower the City's energy use and carbon footprint, and improve public safety.

"This is one of several strategic and innovative projects that we are implementing to address our COVID-related budget shortfall with both immediate and long-term savings to the city budget," said City Manager Brian Platt. "Not only will we significantly reduce costs, we will also reduce the energy use of our streetlights by as much as 50% while providing better lighting in every neighborhood of the city."

Of course there's a very real risk and cost for this update . . . 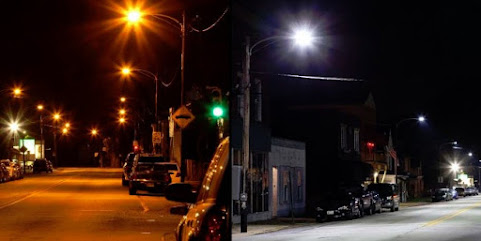 "Municipalities are replacing existing streetlights with efficient and long-lasting LEDs to save money on energy and maintenance. Although the streetlights are delivering these benefits, the AMA’s stance reflects how important proper design of new technologies is and the close connection between light and human health.

"The AMA’s statement recommends that outdoor lighting at night, particularly street lighting, should have a color temperature of no greater than 3000 Kelvin (K). Color temperature (CT) is a measure of the spectral content of light from a source; how much blue, green, yellow and red there is in it. A higher CT rating generally means greater blue content, and the whiter the light appears.

"The new “white” LED street lighting which is rapidly being retrofitted in cities throughout the country has two problems, according to the AMA. The first is discomfort and glare. Because LED light is so concentrated and has high blue content, it can cause severe glare, resulting in pupillary constriction in the eyes. Blue light scatters more in the human eye than the longer wavelengths of yellow and red, and sufficient levels can damage the retina. This can cause problems seeing clearly for safe driving or walking at night . . .

"The other issue addressed by the AMA statement is the impact on human circadian rhythm . . .

"Therefore, the AMA’s recommendation for CCT below 3000K is not quite enough to be sure that blue light is minimized. The actual spectral irradiance of the LED – the relative amounts of each of the colors produced – should be considered, as well."

Sadly, there was absolutely ZERO public discussion on this massive local endeavor that will completely change the vision of Kansas City after dark.

Those lights look pretty bright. It'll be easier to see the rats that way.


You can thank the idiot Obama for this he is the one that pushed led. The cost is actually higher while they use less energy the bulbs cost way more. So it's funny how a city that cry's broke can or would even think of doing this. But then again think of your mayor and city officials and that explains it all. you're buying unnecessary lights and racist graffiti on the streets, perfect.

I was an early adopter of led. Ecosmart 3000k from home depot. Primarily for the warranty, 5 year. Good thing too, not a one of em had lasted 18 months, typ 12 months. All dated and recorded. These led lights will maybe last a couple years, definitely not as long as standard lights. Things are far more expensive too

city must know that LED is a scam. Would like to be the lucky bastard who won that contract. Lifetime work assured.

Who cares about the Ama. They say it's OK to kill babies and people with "low quality of life".

If that's true, how did you make it out?

Could we get serious for 15 minutes or so?

Get some sunglasses to wear at night.

they underestimate how many people over 40 will start running over meandering medians/curbs at intersections with the new lighting.

Q: Why did the streetlight undergo LED transition therapy?

It’s bad enough that every new car is being equipped with these blinding lights, now the cities too. Thank God I moved to Kansas.

KC’s idiot City Manager and Mayor have indicated they are going to save money in THIS YEAR’S BUDGET somehow by SPENDING MILLIONS in this year’s budget to install these bulbs. IF there is a savings, it will be in future years, not this year. More signs of a scam. Or are they just incompetent?