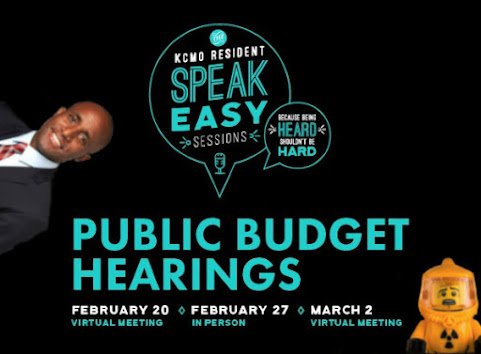 This morning we share a public service that will likely go ignored amongst residents who can't control their tempers.

TKC ADVANCE WARNING!!! SOCIAL MEDIA ACTIVISTS AND ALLIES OF MAYOR Q ARE READY TO PUSH BACK AGAINST CRITICISM OF KCMO BUDGET PRIORITIES!!!

The cadre of online hacks aren't so fearsome but with backup from consultants they're pretty effective at faking a Twitter mob and bulling boomers who don't realize that mean comments from burner accounts aren't the end of the world.

The public testimony aspect of the "budget process" is typically rigged and serves as nothing more than a forum for manufacturing consensus that has NEVER existed. This year, amid COVID, the discourse regarding local spending will be even more tightly controlled and almost completely fake.

Learn more about how the City Budget Process works and find out how to attend budget public forums at KCMO.gov/budget.

Better title for you T: Speak up and get shut down.

The KCMO "budget" is worthless anyway.
It's nothing more than pieces of paper with numbers on them.
But when it comes time to actually spend tax money, the insiders, consultants, developers, bond attorneys, out-of-town professors, and all the rest of the 12th and Oak hangers-on will be there to get their seven votes and nice contracts.
"Emergency" spending ordinances, and all behind closed doors.
No need to waste anyone's time "testifying".
It never changes.

For every black that is killed there is one less burglary, car jacking and rape.

^^^ good point. Let the thugs cull their own herd. not a bad strategy for the mayor.

but you left out home invasions..


My way or no way....the racist Quinton Lucas.

TOP PHOTO -- FLY ON THE WALL

Asked if he could be a "fly on the wall" during budget hearings, what kind would he be?

The best way to not let the peoples voices be heard is to remove all chances for them to speak out.

Then later on when confronted about the budget Lucas will shrill that the public had a chance to speak out against it and failed to do so.

Thou shalt not speak ill of Dear Leader!

^^But everything you post is a lie and we're tire of you. go to Parlor with the rest of the liars.

you must be african american.

^^How come you don't have better things to do? You must be a broken, busted, bitter loser.

You must have at least 100 cats in your shanty.

12:22 if Tony cut your free speech off you would have to kill yourself, nothing else to do with those lame non-witty words of wisdom

you are a perfect example of what breathing stale cat piss does to the human brain.

Going down Gilham to Costco noticed the city crews working on clearing the snow. The sidewalks were still a mess but I did see 4 men with machinery clearing the snow from the bike lane. WTF

Nothing so interesting as hearing the tenant advocate say the same thing over and over again. Kansas City MO doesn't have the resources to keep city hall lights on, let alone KC Tenants...