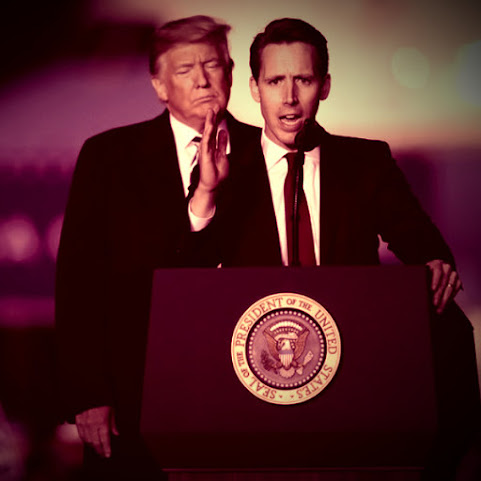 Despite overwhelming Missouri voter support of Prez Trump and a clean sweep for Show-Me State Republicans in elections about two months ago; in the aftermath of the Capitol riot there's a torrent of animosity against an aspiring MAGA NEXTGEN leader.

The admonition from MSM is unanimous. Here's a quick sampling of some of the more interesting missives over the past 24 hours:

The Hill: Hotel cancels Senator Hawley fundraiser after Capitol riot - 'We are horrified'

Vox: When (Senator) Josh Hawley and Trump Jr. use the term “Orwellian,” they are indulging in precisely the kind of lazy and dishonest obfuscation Orwell railed against.

To wit and because our TKC blog community predicted as much months ago . . .

The deluge of hateration against Senator Hawley is unlikely to sway his voter base and, ironically, seems to be securing his standing as the heir apparent to the MAGA movement.

Agree or disagree with his political agenda, there's no denying that the Missouri politico has garnered more share of mind than almost any other Senator in the nation over the past two weeks.

Whilst the plebs debate their constantly shifting values on social media, we can only hope that KICK-ASS TKC READERS are smart enough to understand the American discourse is just another function of corporate branding and the vast majority of what voters believe was programmed by much smarter opinion makers and denizens of K street.

And so, the debate persists and follows a surprisingly familiar script as we await THE NEXT INEVITABLE WAR and/or villain manufactured by ruling class.

And all of this inspires our playlist tonight filled with horrible songs about apologies and regret that seem to be prescribed and/or demanded from our conservatives friends who aligned themselves with a former game show host and soon to be former President of the United States.


Show of hands. How many MAGATS plan to riot and murder police officers next week? Give our MAGAT PATRIOTS FOR TRUMP group a call at 816.512.8200. Let us in on your plans.

^^^ Give them your number first antifa rioter.

Hawley wins the election against Kamala Harris by a landslide. Republicans take back the house and the senate in 2024.

What exactly are Hawley's qualifications; what are his accomplishments?

I agree with my Senator that your Senator has violated his oath of office & should be removed.

He knows very well that there was no voter fraud. He's just playing to Der Fuhrer's base, & wanting to be Trump 2.0 is hardly a worthy ambition.

And everybody loves Biden. That's why DC is locked down like Tiananmen Square. Smell what you are shoveling yet? The best thing that could happen to Hawly is that bitter old bitch McCaskill mounting a charge against him.

I'd say that things are much more Huxleyan or Ballardian but whatever floats yer boat.

You get on here and constantly spout your bullshit Byron. Shouldn't you be blowing livestock at this hour?

Hawley is hawt. With consent would be more than happy to suck his nips.

The Karencrats stole the election, isn't that enough ?

Josh Hawley is the Christian taliban. He’s what happens if you put Hillary Clinton into a man’s body. Put him on a ticket and its kryptonite for the other candidates.

Not allegations or characterizations- I get it, he promoted the protest, he disputed election results, blah-blah-BLAH!

Please connect your dots. HOW did he, or WHAT did he do that is seditious, conspiratorial, or whatever you want to charge?

[Haven't seen this answered any.where. ever. So I'll be checking back hopefully.]

^^^ Since Trump won't be around much longer the presstitutes need someone new to focus their hate on. Let the teeth gnashing begin.

Hawley and Cruz have a constitutional rights to protest the electoral votes but now the libs go batshit crazy...again. They don't like it when the shoe's on the other foot. Evil people they are.

Hawley is major embarrassment for Missouri. If he cared about the state, he would resign immediately.

Whining shitflakes crying about facing the consequences of treason, murder, and seditious behavior. Turns out Americans really won’t tolerate people who advocate the violent overthrow of the government, and the murder of police officers. Who knew?

@8:39, what leads you to believe that Hawleycares about Missouri?
When he was given the fake position as a lecturer at the University of Missouri, so he could meet the residency requirement to run for Office (he used his Sister's address and never taught a class), he spent almost no time here.

When he was elected Atorney General, he continued to live in Virginia, but use his Sister's address, and spent the two years before he resigned working out of State well over 00% of the time, on other Repunlican's campaigns.

Wgen he was gerrymandered into the Senate, he continued to use his Sister's address, until he was "outed" as being a non-resident, then bought land near the Lake of the Ozarks to"build a house", with no construction started to date.

Hawley is a Virginia resident falsely "serving" as a Missouri Senator with the full complicity of the Missouri Republican Party.

It's the Demoncrapic Playbook that says if you don't agree with us, you'll be silenced. Just ask Jack Dorsey of Twitter. The Nazis used the same tactic.

^^Well it’s certainly better than the repubturd playbook that says if you don’t agree with an election, or your candidate loses, overthrow the Capital and murder police officers.

Their playbook has been to riot and murder for four years now and kameltoe hairyass has told them not to stop so....

^^^Well a police officer murdered an unarmed protester too, so it's a tie.

So how does one go about overthrowing a capital? With crowbars?

12:40, here are some other people who violated their oaths of office and should have been removed (although you failed to make that demand at the time).

"Then-Vice President Biden was interrupted 11 times during certification of Trump’s win in 2017. “The electors were not lawfully certified, especially given the confirmed and illegal activities engaged by the government of Russia,” Rep. Jim McGovern (Mass.) said in objecting to Alabama’s votes. “People are horrified by the overwhelming evidence of Russian interference in our election,” Rep. Barbara Lee (Calif.) said in objecting to Michigan’s votes. Rep. Jamie Raskin — a Maryland congressman just named to the House impeachment team — also objected to certifying Trump’s election."

^^Let us know when he commits treason, stages an insurrection against the government, and murders a cop. Maybe we will care then.

Hawley sold out democracy. Self promoting opportunist. Embarrassment to Missouri and the country! Slimmy.

709 - he raised up his fist doncha know. Clearly a secret racist signal to the boogaloo bois

1240 OMG let's hope Claire does not mount anything anytime soon

I will mount Josh or he can mount me. He’s a stud and will make an awesome president someday.

As a former Rockhurst attendee, my opinion is Josh is not a Christian. Or even religious. His ethics are based on what HE CAN GAIN. Not on what is morally right or wrong. Its all about him. Its NOT about you, the citizen. He wants to be in the history books, as a President of the USA, in books for the next many thousands of years. Some people are afraid of death. They feel if they are in the history records, somehow they are still living. Their greatest fear is they will die, be buried, and after a few generations (say 150 years) nobody even knows they existed, nobody visits their grave, its as if they never existed. He is trying to "preserve his life" they only way he can - in history as President. What a poor reason to be President.

Interesting post, and I agree, BUT that version of Christianity is one practiced by many fundamentalists (especially evangelical preachers like Franklin Graham) as well as our soon-to-be ex-president. They're all about money and power and the hell with anything and anyone else.

People and politician all about money, power, and the hell with anything and anyone else never stop to ponder if there is an afterlife. They are simplistic and only believe what they can see. If they even believed 1% that they might be held accountable someday in the afterlife for their evils, they would act different. Everyone claims to be a Christian when running for political office. Its the biggest ploy ever. Do you really think a real Christian would raise his fist like that? No a real Christian would be praying. Not inciting conflict. IMO Josh is a godless person. He showed his true colors early, and it gives us time to replace him with a good man before he gets intrenched. In a way his fist was a good thing - without that people would take longer to disown him.

The Capital was paid for by gushing blood of dying US Servicemen. ISIS, AL Qaeda, Nazi's, Saddam Hussein, Iranians were never able to even touch the Capital they hated so much.

Josh Hawley vandalized it - for what - a rumor with no evidence that the election was thrown (as announced at 4 seasons Lawn & Garden Center Center)?

If AOC weren’t such a stupid idiot in her demagoguery against Hawley she would mention hey what do you want out of a guy from Lafayette county which had by far th largest slave population in the state. Only county where enslaved black s exceeded free whites, I believe. Where you had s Carolina or Mississippi ratios. And so you see a state funded confederate memorial there, even tho Mo was a loyal state.