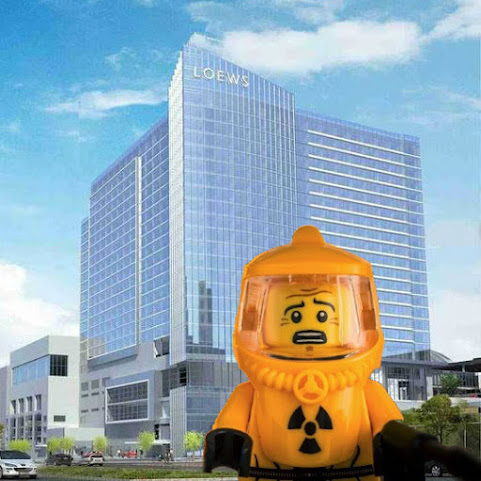 Over the past decade every downtown Kansas City tax increase, subsidy and scheme has been justified by one word a single word: Momentum.

The talking point distracted voters long enough so that politicos NEVER had to explain the benefits and/or risks of their plans.

Now the reality of the global plague has unarguably changed financial situation for this cowtown and the world.

Check this link sent our way to illustrate the point and remind locals about a HUGE convention hotel deal gone horribly wrong inside the loop . . .

A report said the US hotel occupancy rate was 44% for the year, down from 66% in 2019. This was the lowest occupancy rate on record. In an earlier STR report, we noted weeks ago that the industry had one billion unsold room nights for the first time, surpassing the record of 786 million in 2009.

Best Western CEO David Kong recently told CNN that "If we don't get a vaccine soon and business doesn't return, it's going to get much worse."

And so, a KICK-ASS READER shares this insight to start the conversation . . .

Suggested agenda item for KC City Council Business Session: MOMENTUM
Former Mayor Sly James, Convention Hotel Developer Mike Burke and the downtown cheerleaders should answer: Which way is the momentum headed now?
Business travel and phantom conventions are never coming back.
What is your plan to pay for this debacle?

CFRG had it right on the airport, streetcar, airport. All will cost KCMO taxpayers millions for many years to come. Millions they don’t have. You can’t feel sorry for the people in charge now, most of them approved these projects.


What's the direction of Downtown? Same as midtown and that is racism, crime, and abandonment, broke people due to a corrupt black community that steals kills and destroys and the idiot white people who let them do it.

The direction is Detroit. Broke ass, corrupt, crumbling and crime-ridden.

and "oh it was the pandemic's fault" won't cut it

even before the pandemic, anyone with functioning eyes and a brain could tell you the folly in chasing after the convention business

funny how so many gasping out grifter schemes were revived by covid federal bailouts. e.g. streetcar extension was getting zero federal pork til pandemic slush funds show up

Each morning, preceded by some preliminary farts, I retire to the throne room to sit and experience the same momentum.

Downtown KCMO is little more than a movie set supported by hype and taxpayer subsidies.
And that's all it's been since the P&L District was built and which public support costs the taxpayers of KCMO $15 million/year for at least the next ten years.
Potemkin village on the plains.
So much winning!

Someone ask Mayor McDrinkerson! Surely he's slept it off by now.

I am pretty sure that the momentum vector is pointed in the “hell in a hand basket” direction. Weird.

Loew's can afford to throw an exclusive fund raiser in Florida for Josh 'The Dick' Hawley but their Kansas City hotel has to be built on the backs of KC taxpayers.

Sly is a bull charging kind of a guy. It may have something to do with his Marine training. The convention hotel was never going to make the city any money or create any kind of an ROI on the huge amounts of tax dollars wasted. Sly's goal was always about creating employment for folks in the city, nothing less at the expense of the tax payer.

What about a streetcar? It is promoted as a cure to all the ailments in KCMO. I forgot, we already waste a ton of money on it and the results are zero

The cheerleaders for KC are like little kids playing house. It’s fun until it gets real; paying bills, making repairs, trying to avoid crime, etc. isn’t a game. 11:24 nailed the question of where KC is headed.

Our city government has all the same momentum as a turd being flushed down the toilet. The turd has more dignity and honesty though.

That turd has been swirling around the bowl since Q took office.

TOP PHOTO -- THE LOEW DOWN

Problem #2 - Lack of affordable housing for the urban core.

From a 2017 news article. If true and the city is not on the hook for this, then the developer and Loews are the ones taking the brunt of the downturn.

Quoted:
To make it "crystal clear" to taxpayers that the city is getting a much better convention hotel deal than most cities are able to negotiate, TIF Commissioner Troy Nash asked for assurance Thursday that the city's participation will be limited to the $35 million cash donation, $7 million land donation, plus approvals of TIF, CID and a contract that will give Loews Hotels & Co. exclusive catering rights in the Convention Center's Grand Ballroom and Conference Center for 15 years.

Nash was assured that the developer would not be able to come back for an additional nickel of support, regardless of how the hotel performs.

Not to worry Biden dollars are on the way!

8:42 and the airport isn’t gonna cost us a dime either amirite!

Mike Burke walks away with $8 Million and the Taxpayers are on the hook for $35Million plus interest and all the TIF subsidies for 23 years, easily $75Million out of the taxpayers pockets!! Thank you Sly!! And Lucas supported this fiasco!!

Given a choice of Chicago or Kansas City for a convention, why on earth would anyone pick Kansas City? (as an example)

Kansas City is a "plan B" on a good day and irrelevant otherwise.