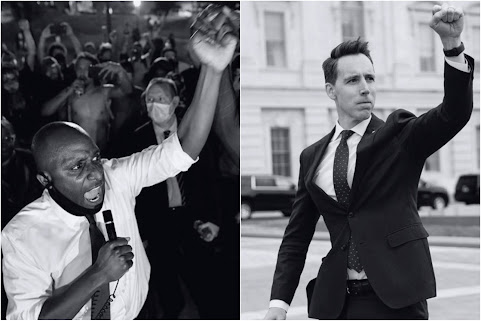 At the risk of falling into the abyss of whataboutism we share a perspective from a TOP ECHELON TKC READER that attempts to provide context by remembering "mostly peaceful" protest throughout last year that also endangered local democracy.

"Today's violent protest at the Capitol wasn't really so different than the Black Lives Matter protests we've seen in Kansas City and throughout the nation. In fact, there was far less violence and destruction of property overall.

"Let's not forget that Kansas City institutions like KCPD headquarters were also under siege by violent BLM protesters who injured officers in their attacks."

"It's unfair to condemn violent protest from one side without mentioning acts of destruction from the other, opposite political viewpoint."

"They're both part of the same hypocrisy. Standing against politically charged violence is commendable, so we should do it across the board or else the condemnation is nothing more than auspicious, but ultimately empty, rhetoric."

Ultimately, I think Anderson Cooper should be the judge of what is right and wrong.

His ratings would be nothing without having MAGA to complain about.

Today was Antifa strong. That's for sure.

Sure, you can't condemn MAGA protest without condemning BLM riots.

And, lauding BLM riots is one of the roots of MAGA protests.

Nope, those were MAGA thugs. Own it creep.

The Black Lives Matter protests stemmed from the continuing murder of unarmed Black men & women by the police. George Floyd was one murder too many for Blacks to stomach. There was no storming of city hall to intimidate council members.

There is no real comparison here.

Donald Trump should be removed from office, NOW.

It is simply not safe to wait two more weeks.

Antifa and BLM have been rioting and vandalizing for 6 months in democrat cities and we were told that it peaceful protesting. So today was no different, peaceful protest. Capitol police shot and killed a unarmed white women. No Justice/No Peace.

If mob violence, fueled with utter bullshit and instigated and encouraged by the fucking PRESIDENT OF THE UNITED STATES isn't a special case I don't know what is.

The clown ought to be removed from office immediately. It'll seal his legacy.

Josh Hawley should be tried for treason and executed if found guilty.

Four years ago democrats were saying to blowup the White House, marching and rioting. The media did not condemn them or say they were committing treason. They defined them as the resistance. Today we saw the new resistance to the marxist/socialist/democrats.

The BLM protesters that vandalized the Andrew Jackson statue in front the courthouse were not prosecuted. Now that the other side has stood down in 2020 and now is going to adopt the same tactics in 2021, we are suppose to be outraged. Give me a break.

I just watched Jimmy Fallon, and àm wàtching Seth Meyers right now. I must've watchéd something different than them. Coux? Overthrow? Insurrection? Flabbergasted by the actions of the "rioters"?
I didn't see damage or destruction that even came close to those "mostly peaceful" démonstratiobs this past Summer.

The cause of the Trumptards is based on a wall of lies.

He lost. He claims the election was stolen - did it again today - but was never able to prove any of it in court. Not once but over SIXTY times.

A pointless riot by gullible people who don't have a grasp of the truth and are being spoonfed lies in their right-wing media ecosystem.

If there was something to it it'd be different - maybe. But they keep hearing over and over the election was stolen and they've bought into it like suckers.

I can't think of anybody stupider.

Oh wait, I can. Chuck Lowe.

"Coux?" The place in France?

"If we nominate Trump we will get destroyed.....and we will deserve it."

We've heard from literally everyone, today, except the Director of the FBI.

WTF? He doesn't have anything to say about today's events?

In fact, no one has even mentioned him. It's like we don't have an FBI Director.

So I take it that this Hawley character is your new CHUD god?

I'm all for civil war. Let's do it. I've been to war before. It's not that big of a deal. I am not one of these soldiers today who experienced a fart in the wind of a dessert overseas and then claimed PTSD at discharge time. Those who listen to the MSM claim there wasn't election interference (like the AP is the arbiter of what constitutes a fair election) are the same people who listened in 2016 when all of the MSM claimed there was election interference to get Trump in the White House. You can't have it both ways. But now elections are tainted and meaningless. Literally half the country knows the election was rigged and will have no faith in the electoral system from this point forward. I don't believe there will ever be another fair election. Mail-in ballots. What a crock of shit. Talk about third-world politics - and I have literally seen third-world politics up close and personal. I'm all for insurrection at this point. I'm literally ready to kick some "Awoman" ass. We'll start with that idiot Cleaver.

You libtard Democrats ain't seen nothing yet. 1 million conservatives working people in DC. What do you get at your BLM
Antifa riots. Both groups are all Democrats. 2,000 Democrats is what you get. This is going to be fun. Democrats you have woke up a sleeping giant and it ain't going away you commies.

Oh yeah right. There were 200.000 more votes cast in Pennsylvania than voters. That ain't fraud Democrat?

No mention of peaceful protesting. Of course, they are also not calling it a riot. They are calling it an insurrection. No tear gas deployed. Nobody shot in the back repeatedly. I mean, this nice reporting for the White thugs that kicked in the Capital is too much. Almost no fatalities, no high powered weapons drawn to force compliance.... White people not obeying commands by police and resisting... still alive to tell the story.. I mean there is a lot of contrasting parts to this story. Not defending BLM because a lot of that was also attributed White people.

Dear 11:27: in the case of Floyd and others, what we have here is not systemic police racism but systemic arrest avoidance by black thugs.

He's too busy covering up Hunters laptop crimes to comment.

No negro mayor kneeling, either.

Yeah, and now you lying shitbags are trying to say that itwas BLM in disguise!
Too bad so many members of Trump's Cult have already posed video of themselves destroying things inside the Capitol Building!
Proof poitive that you are as egregious a group of liars as Trump and Cruz and McConnell and Hawley and Graves and Marshall and all the rest!

Th only Republican with any honor left is Mitt Romney!

Looks like it was a mostly peaceful protest to me. Ever heard that before?

Officially there was 1 killed in KC protests.

He was a father of 4: https://fox4kc.com/news/kansas-city-photographer-a-father-of-4-killed-after-sunday-protest/

There were a lot more but that is the murder of an innocent black man that really stood out. ANTIFA didn't care.

Get your facts straight "progressive" dicks.

"At the risk of falling into the abyss of whataboutism..."

It was a risk. You took it. You fell.

The BLM protests were in response to perceived police violence. I don't know of ANYONE who condoned the violence and the self-serving looting that followed (and it should be noted much of that violence was carried out by Proud Boys and their followers, like Kyle Rittenhouse). Yesterday's riot was instigated by a Huey Long-like demagogue who is upset with the fact that a majority of Americans rejected him. Note here--voters rejected HIM, not his party. He has fabricated lies that support his position, sold those lies like he sold Trump steaks and Trump College degrees to the gullible and the deranged. He played with matches around dynamite, and he got an explosion.

I never thought he was too bright, but I thought he was brighter than this. He could have played his victimhood into a movement that would have influence for years. Instead he's shot his wad. As far as 2024 goes, yeah he "coulda been a contendah," but now he's just an old has-been who may survive until Jan. 20 without being impeached and removed or declared incompetent under the 25th Amendment, but he'll never be invited to any reindeer games by previous presidents.

It will be very interesting to see how his obituary reads, and how he's treated in future history books will be fascinating.

Cleave is too busy singing his Hymns and Hurs to have any awareness about what is happening in this country.

Those weren’t election steal protestors bildering up the Capitol building wall to the roof. At least one bus load of AntiFA shock troops infiltrated the protest and were chanting anti-government slogans, breaking windows, and pushing the crowd forward into the Capitol building.

Finally, a thoughtful comment, not a spewing of baseless manure.

^^^And immediately back to baseless manure.

8:02: This administration needs to be given a coup de gras.

There were no antifa infiltrators. None. All white, MAGATS, Nazis. Hunt them down and kill them where they stand. No mercy!

Yesterday, CNN interviewed John Sullivan, a BLM activist from Utah who had previously threatened to rip Trump from the Whitehouse. He was in the Capitol building and recorded the shooting of Ashli Babbit. Why was he there?

Mayor mckneely doesn’t have any business speaking up about riots after he allowed death and destruction to happen in this city, nope, not one word.

Settle down crackers, all's good in the Dishtrict. Awomen

we need a gulag

No sane person views Ashli Babbitt as a hero. For some reason certain communities consider career criminal George Floyd a hero. This is an issue. All summer long our cities burned to the ground via violent protests and nothing was done to stop it. This is why this country has problems.

I might add no one should condone violence. I certainly do not, from anyone no matter the reason. We should not condone violence from BLM protestors nor Trumpers. Criminals, like Ashli Babitt and George Floyd, should not be considered heroes either. This has to stop. People are tired of it.

who doesn't hesitate to call police who whip ass and kill disabled people.