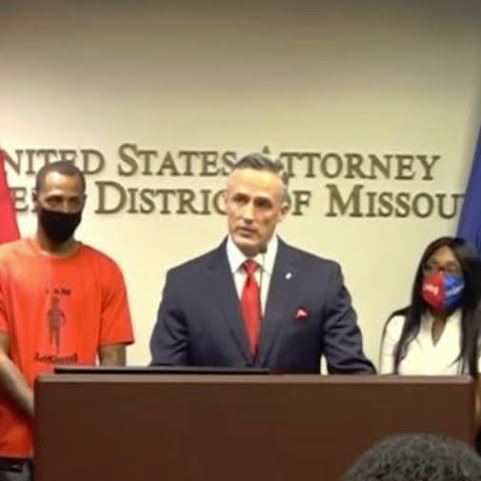 Important perspective from one of the top law men in the Kansas City metro.

Federal law enforcement authorities have publicly expressed concern about the potential for violent demonstrations in all 50 states and the District of Columbia leading up to Inauguration Day on Jan. 20.

My concern, as the chief representative of the U.S. Department of Justice in the Western District of Missouri, is not with peaceful rallies or responsible public expressions of opinion. The U.S. Constitution guarantees all citizens the right “peaceably to assemble, and to petition the Government for a redress of grievances.” My determination to protect our Constitutional rights, however, is matched by my utmost respect for law and order.

I stand with our law enforcement partners, who will take all necessary measures to protect public safety and uphold the rule of law. We will not tolerate violence, nor will we overlook criminal behavior. Those who cross the line from exercising their rights to violating the law will be held accountable for their actions and prosecuted accordingly. Political disagreement is not a license to engage in domestic terrorism, to commit acts of violence, to harm or threaten others, to illegally trespass, or to break the law in any way.

The genius of American democracy lies in the ability of its citizens to disagree with one another without resorting to violence, and to respect the peaceful transition of power following each election. We must be vigilant against those who undermine our democratic ideals by engaging in criminal violence.

We need the public’s help to keep our communities safe and protect the First Amendment rights of all Missourians. Each citizen has a role to play. Remember to stay vigilant and report suspicious activity to local authorities. If you see something, say something. Submit any information you have about real or potential threats of violence at any upcoming demonstrations or events by calling 1-800-CALL-FBI or online at http://tips.fbi.gov.

if trump supporters really "back the blue" they'll stand down.

This more BLM and Antifa. Just like down in Florida.

And yet despite the fear-mongering from the Chi-com serving, deep state corrupted DOJ, the DHS sees “no.specific or credible threat” around Inauguration Day.

The Federal Bureau of Investigation (FBI) arrested Daniel Alan Baker, identified as an Antifa activist, on Friday for allegedly issuing a call to arms on Internet platforms against the Florida state Capitol.

Biden was worried about being fragged by one of the 30K troops in DC to protect the most voted for and beloved president's virtual inaguration that the public cannot attend, so the dem.s vetted the troops and found 2K loyal to the marxist coup.

Nothing inspires confidence in government like politically vetted masked troops with permission to kill citizens being given police powers in the nation’s capital in a ceremony in the dead of night.

Good ole joe needs miles of fencing and barbed wire and 30K troops because that is how legitimate he is.

^^^ or no violence outside a handful of left wing nut jobs because it’s ok for them to do whatever they want.

It’s going to get worse under the communist China party of joe and his hoe. Much worse than we could evar imagine.

If Biden got so many votes and Trump is really a jackass with little support, why does China Joe need 30k troops, and now there are doing background checks on them? A bit paranoid there Joey?

Pretty soon his "loyal" troops will be wearing brown shirts with an armband.

if I'm a white supremacist I guess I might as well try to enjoy it !

Well, 11:53, the Chuck Lowe-type crazies are out there advocating violence and this pretty much proves it doesn't it?

That's why we need a few battalions.

12:07, I watched the Confederacy swarm up Capitol Hill on live TV.

I do not want to watch President Biden being assassinated on Inauguration Day on live TV.

It only takes one John Wilkes Booth.

The army finally got the message that they must root out the white nationalist poison from their ranks.


By the way, I might mention I'm packing my U-Haul as we speak, for a move to Kansas City. I like the way things are shaping up there, and I believe I can be a big help to the LGBT and BLM communities. I look forward to meting many of you. I have rented a home in the Northeast. I will advise when settled in.

Looking forward to seeing you Byron! Maybe we can be fuck buddies.

Byron,
Your commie president is more likely to get popped by his VP than anyone in the crowd. He won't last till Labor Day.

He's nothing but a prop and tool for the commies. He's just too senile to realize it.

Why did you rent in the Northeast? There are a ton of empty stores on the plaza - you could open up shop in for alot less. It would be like the old days with the freaks in the window you pay a quarter to doodle.

Imitating me is a bridge too far for you "Chud" haters - stick to 3rd greade insults.

This is the Reichstag Fire for liberals. No one is showing up to see this retard being sworn into an office he stole.

Sorry I meant "grade," as in "I never got past the fourth grade." Which is true.

Get some black people behind me in this picture. Have you got two?

The threat of violence if it exist is coming from the godless leftist free shit army. The silent majority is too busy working its ass ofc supporting the immature Karencrats and their spoiled step children.

12:40 please do come back to Mo as I have some paper I'd love to slap on you. Witnessed and served you'd be.

Fingers crossed the treasonous, murderous, seditious, cop-murdering Trumpkins get mowed down this week! The only good MAGATS, are dead MAGATS.

He has indisputable proof that the 30,000 Troops are there to arrest Biden, Harris and all Democrats in Congress, then to declare Trump President For Life, and kill anyone who dares to stand up to them.

In other words,all Trump supporters are advocates of the overthrow of the US Constitution and the establishment of a Military Doctatorship in its place!

That is "Patriotism" in Trump World and in the eyes of the Republican Party, and is what you, Retro, Bandit, Chuck and every other Trump Supporter who posts here are advocating, no question about it.

The only problem you Trump fans face is the question of what you will be able to do if the rest (the vast majority) of the American People view that as Treason!


What is Biden so afraid of? He knows he stole the election but it's his party that riots not ours.

Where was Western District Attorney General Garrison when ANTIFA and BLM were burning, looting, violence against police and elderly citizens ?

Garrison says there is no room for violence but allowed 9 months of incredible violence go unabated by ANTIFA and BLM.

For those who know there history, the Marxist Democrat Party and our government are following the exact same game plan as Hitler, Goebbels and their Brown Shirts. Silence all other political parties by illegally using the laws in a selective manner.

We need the public’s help to keep our communities safe and protect the First Amendment rights of all Missourians. Each citizen has a role to play. Remember to stay vigilant and report suspicious activity to local authorities. If you see something, say something. Submit any information you have about real or potential threats of violence at any upcoming demonstrations or events by calling 1-800-CALL-FBI or online at http://tips.fbi.gov.

TURN IN YOUR NEIGHBOR, FRIENDS, AND FAMILY MEMBERS. CONTACT THE FBI.

THE GESTAPO, KGB, AND STASSI USED THE SAME TACTICS.

BLM / ANTIFA BROWNSHIRTS ARE ALLOWED TO ATTACK MIDDLE CLASS AMERICA BY THE AUTHORITIES TO INTIMIDATE AND TERRORIZE AMERICANS INTO SUBMISSION.

China Joe Biden is now afraid of the National Guardsmen and having the FBI do background checks are every one of the 25,000 Guardsmen.

Cowardly Biden needs to stay in his basement as it sounds like he is afraid of his own shadow.

If he was a legitimate President and honestly won the election; Biden wouldn't be acting like a guilty coward.

Well, 4:57, if the Chuck Lowe-type crazies weren't out there advocating violence we wouldn't need a couple of battalions.

Plus, they have called out 3,000 FBI, ATF and Secret Service, 300 New York cops, Capitol Police, the Washington DC police, and Sister-Wife to protect this cowardly future Commander in Chief.

^^as well they should. Biden is the dully elected President. He won the election fair and square. Trump and his followers are treasonous, murderous, cop-killing traitors. May the troops slaughter them wherever they may be found. No mercy and no quarter be given to those who try to overthrow our country.

That’s what they said at Kent State. Idiot

These “if you see something, say something “ lame type campaigns always lead to so much noise and so little true tips, be it a transit system or an airport, and this won’t be any different