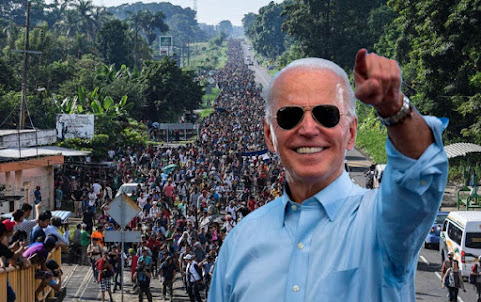 Thanks to the policy of the new administration, locals will soon confront many opportunities to make new friends.

To wit and because TKC is a "pocho" Latino who is somewhat proficient in the language of the oppressor . . .

KANSAS CITY PREPS FOR AN EPIC WAVE OF IMMIGRANTS HOPING TO BENEFIT FROM THE UPCOMING BIDEN AMNESTY!!!

For perspective, let's not forget that former Prez Ronald Reagan was the first modern-era icon to grant an immigration amnesty and longtime residents still remember the local impact.

"In Kansas City, the Reagan amnesty quadrupled the number of Latinos in Kansas City in less than 10 years. There's still an effect from the legislation and that's why the Latino community has been the largest growing ethnic minority in the metro for at least 30 years. Leading up to Reagan's plan, KC was packed with migrant workers, tourists and family friends who hoped to qualify. From the Westside to Northeast there were literally people sleeping on the street just because they wanted the amnesty so desperately. In fact, there was a great deal of intercultural conflict between community leaders and the new arrivals; part of that history is what ultimately led to the Westside CAN Center and police working with 'illegals' instead of  reporting them to immigration authorities."

And that leads us to a very quick change in language that's also on the horizon . . .

For what it's worth, this was always a sticking point with activist, Prez Trump supporter and toy gun enthusiast Kris Kobach . . .

Despite vehement objections, Mr. Kobach was legally correct when he referenced "illegal aliens" and balked at terms like "dreamers" given that he was citing U.S. law . . . But laws change.

Now the term "alien" isn't just out of favor but soon might not be part of the American vernacular from a legal standpoint.

Right now social service agencies and local leaders active in Kansas City's Latino community are prepping their requests for both non-profit and government funding given the influx in population that they will likely meet in the very near future.

Kansas City is no stranger to South of the border guests given that some of the most brutal Mexican drug lords have regularly visited this cowtown and law enforcement recently confirmed that drug cartels have set up shop throughout the metro.

With a Democratic Party controlled White House, Senate and Congress it's unlikely that the Biden Amnesty plan will meet with anything but ritual ranting given that we're a long way from midterm elections and this is just the FIRST part of an agenda that will shape the future of the nation and Kansas City.

New York Post: Migrant caravan stopped near Guatemala border on their way to the US

But I thought Trump built the wall?

I guess we don't have anything to worry about.

Yea, I mean Mexico paid for it and everything!

Oh c'mon Tony they'll all go to Houston or Los Angeles. Get real.

Your fearmongering goes nowhere anymore so you might as well not bother.

Regan amnesty may have had small part in it, but Latinos tend to multiply on their own - that Catholic breeding plan.

The only good thing about this policy is that Plugs Biden's first name rhymes with who he is - Joe vs. Ho, since he whores for both Chinese and now the rest of the lefty world.

It's ok, Commie Harris is counting down the days till she shanks this poor old bastard and puts him in a home.

You libs wanted it--now you got it. Don't complain down the road when you can't find a job because an illegal already has it and will work for less.

^^OK BOOMER (says the millennial hipster. Calls anyone 40+ a Boomer and is very buttsore over his negative net worth - financial and otherwise.

This pro-transgender policy extends to male athletes who claim their gender identity as a female should allow them to compete on women’s teams, receive women’s scholarships, and be admitted in women’s locker rooms.

Republican Party will never win the Presidency for at least the next 20 years once the 11 million illegal aliens become legalized.

The United States of America has been destroyed from within by the Communist Democrat rat traitors like Biden and Pelosi who sold the country out for money and power.

The whole country will become a lawless jungle like Seattle, Portland and all major Democrat controlled cities.

Whatever, fear mongers. Dear Leader has returned, literally, to the swamp. Sleepy Joe kicked his ass. Let it go, MAGATS.

^^^ But that fear that you promoted after the capitol riot was legitimate, right? Even though nothing happened. Weird.


Well O.K. but when they get here the liberal radical democrats will pay the bill I'm not paying it.

THINGS ARE GETTING REALLY SERIOUS. FREEDOM OF SPEACH IS GONE. I TRIED TO FIND PENCES FAREWELL SPEACH. ITS NOT AVAILABLE. GOOGLE,FACEBOOK,TWITTER, YOUTUBE ARR CENSORING ALL CONSERVATIVE SPEACH.. EVEN THR DEMOCRATS SHOULD BE CONCERNED AS FELLOW AMERICANS. THIS IS COMMUNISM

^^and yet we're not concerned. Weird.

Antifa and BLM are now attacking the Libtard cities. The Libtards eat their own. Weird.

Stupid libs...walls won't work if you invite them in and promise free gibs and citizenship.

Reminder, immigration lowers your wages, increases your rent and taxes, and waters down your vote.

The dem party historically was against immigration, because of the above.

The dem party is now the party of the rich elite who do have to live among the immigrants and violent criminal blacks.

The original Mexican-Americans who settled here often complain that "you have to be an illegal alien to get help". The social service agencies don't help citizens, they only help "illegals".

Though we pretended to be all about law and order for almost three whole days, we are now back to doing absolutely fucking nothing about it. If you're BLM or Antifa, the party is back on!!

Senile Sniffer Joe is probably headed to the border now to hold the gate open for the COVID infested, broke assed Honduran caravan...won't it be cool when they all are making $15, getting free health care and free education for their kids and not pay a fucking red cent in income tax. Great idea you Fucking LIBTARD IDIOTS!!!
Please break down any thought of how any of this is sustainable or good for the nation other than lawnmowing services will be dirt cheap.

^^yep! Doesn't bother me at all! They work hard, you don't! They do the jobs fat, lazy, Americans like you won't! We need them, nobody needs you! Worthless CHUD!

Several Betsy Ross flags were flying during Biden's inauguration. Where is Colin Kaeperdick protesting that today?

Some weekend we should send the Rhode Island national guard down to Mexico and take the whole shithole country over. Mexicans are fucking pussies so a weekend is all it would take. We could create a government for them and educate them and then they wouldn’t have to come up here.

"The original Mexican-Americans who settled here often complain that 'you have to be an illegal alien to get help'. The social service agencies don't help citizens, they only help 'illegals'"

And yet the solution is simple. Give the "illegals" a way to become "legal." Weird that you see only problems, not solutions.

Good-bye, white people--and I'm saying that as a white dude myself.

"Does that JLo have a nice big booty or what? Come on man, pull my finger!!!"

^^yep! Good riddance. You have only yourselves to blame. Worthless.

And all those bennies for the underserved, including the vaccine will vaporize. Kiss $15 per hour bye bye suckers!

I am going to enjoy watching this disaster unfold. And Kansas City thought they had problems now LOL

^^Of course you will, what do you have better to do?

Sissy boy and girl liberals; you are on your own.

MAGA will protect each other. 75 million strong.

Strange how the photos don't seem to show them thin and starving as the liberals would have you believe. And strange how most of them aren't women and children either.

Well, thank goodness President Applesauce has made it safe for male trannies to compete in real women's sports again.

Whew! Now we can all rest a little easier.

An immigrant told me that most people come here because America gives away so much free stuff. Hats off to the American taxpayer.

You'all voted for him. Well, he's the man now. Meet your hundreds of new neighbors will ing to work for $5/hr. Welcome to the great new deal!

Bidet's new E.O. about trannies should require douche male "athletes" who want to scam Women's sports scholarships to have it "chopped off"!

The Karencrats are going to brown America. What is wrong with a white country ? The people of color have mismanaged most of the world out side of Asia. Gonna be a long 4 years with the sock puppet and whore in charge.

Hope you limousine liberals are happy after your snowflake knocks up a BLM or taco bender living in section 8 housing in your southern Johnson county heaven. A baby and KU maybe even too much for you to afford after China Joe gives all your taxes away, suckers.

Methinks the CHUD doth protest too much.

Wait til ya sister gets knocked up by Jose and six of his friends.

Don’t worry MAGATS, most of you will be dead soon! Yay! Go Biden!

On the positive side, this influx may replace at least a part of the exodus of KCMO residents south of the river.
And, of course, they can be counted, probably more than once, as both tourists and riders on THE streetcar.
More fun with numbers for the clowns at 12th and Oak.
Frosty!

Smart move right now would be as far away from population centers as you can get.

MAGATS wish for my traitorous, insurrection and dead cops. Notify law enforcement immediately with any and all suspicious MAGAT activities.

Love it or leave it, MAGATS.


"MAGATS wish for my traitorous, insurrection and dead cops" ???!!

Wait until the Karencratics figure out that most Central Americans are Catholic, conservative and hate gays and blacks.