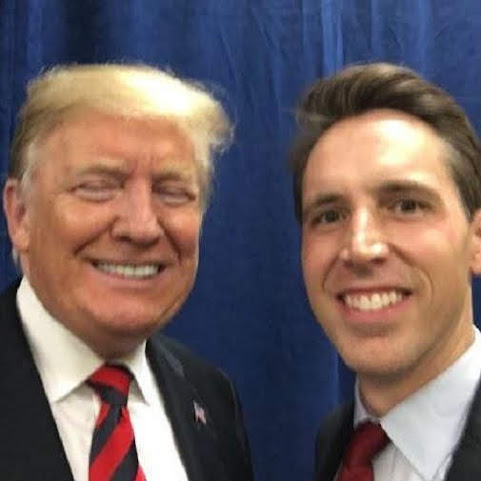 Missouri Senator Hawley has endured outrage from progressives across the nation for his electoral challenge in support of President Trump but what's more interesting is REPUBLICAN REBUKE OF THE MISSOURI POLITICO.

Outgoing GOP Rep. (Va.) tore into Sen. (R-Mo.) after Hawley sent out a fundraising email boosting his upcoming challenge to the Electoral College results. "Of course he's fundraising off fantasy," Riggleman tweeted. "Getting ready for 2024. Using disinformation and conspiracies as a baseline for fundraising. Grift. Fooling people to take their money.

McConnell has also expressed concern that the vote could hurt GOP senators facing tough general election fights by alienating moderate voters. Opposing the GOP-led objection, meanwhile, could jeopardize Republicans' primary prospects by turning off voters who are convinced the election was stolen from Trump. The clash illustrates the emerging tensions between Hawley and Republican leaders.

Senate Majority Leader Mitch McConnell on Thursday held a conference call with the Senate GOP caucus in which he questioned Missouri Sen. Josh Hawley over his plans to object to the Electoral College vote, according to a source directly familiar with the call.

It's exactly the scenario GOP leaders hoped to avoid. Though conservatives can only delay - not change - the outcome of the election, the votes will provide potential primary fodder against 2022 incumbents and squeeze 2024 White House hopefuls. "That will be a common standard, put out by people who are very loyal to the president.

Brennan 'awards' Hawley as the 'most corrupt senator'

Former CIA Director John Brennan explains why he named Sen. Josh Hawley (R-MO) the "Most Craven, Unprincipled, & Corrupt Senator" after he announced plans to object to the Electoral College vote on January 6.

Hawley must have the Washington job he's been so desperately seeking locked in.
Look for him to resign the Senate seat before the Inauguration.

When that fucking Brennan hates you, you are doing something RIGHT.
Keep it up Josh.

Little Joshie is the Herman Cain of 2021. A media splash and then forgotten.

It used to be that politics was Hollywood for ugly people.
But that was when at least a few of these folks actually tried their hand at governing.
Now politics is nothing but Hollywood with celebrity wannabees trying to provide entertainment all the time.
Those cable news shows can't fill all that dead air time on their own!
Hawley's just the current "celebrity du jour".
Tomorrow it will be someone else.
Forgotten is whatever might actually be good for the country or its citizens.
Sad.

How come Josh always looks like a reflection in a spoon?

Brennan is the corrupt one. Notice how scum like him always accuse others of what they are themselves doing.

Pull Brennan out into the street and hang him from a light pole today!

Hawley is a Republican in the same way Bernie Sanders is a Democrat. Both of them align with the major parties because groups that represent their real beliefs (Libertarian and Socialist) are blocked out by (A) the stranglehold of the two-party system, and (B) the media's refusal to highlight any legit third party.

The Libertarians have had a candidate on the ballot, in all 50 states, for the last two elections. That should automatically get them a podium in national debates, but the Repub and Dem parties, and the media, won't allow it.

Bringing in another voice would hurt the bottom line, don't ya know, and might even get the sheep to consider alternative ideas.

Former CIA Director Brennan will be roasting in hell for all of the innocent women and children he is responsible for killing with his fake WMD in Iraq.

When you see the left=wing loonies in the liberal media go after a Republican, you can bet he's doing something right. The Demoncraps have weaponized social and mass media as attack dogs. When a Republican does what a Demoncrap would have done in the same situation, he's called a slimeball. The difference is that Republicans usually follow the law and don't make up false charges like the Mueller investigation fiasco, which costs American taxpayers millions of dollars.

Go Hawley. At least one Republican has a spine.

^^^^And yet even that notorious left-wing loonie Mitch McConnell has told Hawley and his cult to stop with the nonsense. Weird.

You people will never come to no good end.

Double negative @11:21 - you're saying they will come to a good end, maybe like Candice's a couple of topics below.
I'm sure they thank you for your good wishes.
Oh, and only 2 weeks + 4 days till the Inauguration, WHOOPEE!

At the end of the approaching four year skanky harris/dementia joe debacle, folks will canonize Hawley, and beg him to run for potus.

TOP PHOTO
Right... (This Idiot actually thinks I support him - but his Cult gives us money.)
Left... (Only two weeks and four days and I don't hve to be around shitbags like this clown ever again!)

"At the end of the approaching four year skanky harris/dementia joe debacle, folks will canonize Hawley, and beg him to run for potus."

And the Big Bear will say to the Little Bear, "Is the moon in the seventh house and has Jupiter aligned with Mars?"

John Brennan served as CIA Director for President Obama (2013-2017) and was directly involved in the illegal spying against candidate Trump, and the subsequent impeachment and coup attempts to remove him after his victory.

Years ago, while serving as CIA station chief in Saudi Arabia, Brennan converted to Islam. Today he claims to be agnostic. When Obama (a Muslim) won the 2008 election, Brennan served as one of his handlers for foreign relations and promoted things such as the worldwide apology tour.

When applying to the CIA in 1980, during a lie-detector/background assessment, Brennan confessed that he had voted for the Communist Party candidate in 1976 (this was Ford vs. Carter).

After Trump's victory in 2016, Brennan has regularly appeared on all the liberal propaganda controlled-media to repeatedly bash him. He works with multiple groups that seek to destroy America's sovereignty, lower our standard of living, and surrender to a one-world government.

Secretly supporting Harley on this said...

Go Hawley, go! I absolutely dread a Biden presidency for this economy and for the state of America. Donald Trump wasn’t the best President but he was focused on other things besides the liberal agenda... and that’s good. Go Hawley, go!

Why the sad face, MAGATS? Haven’t you already destroyed America? The nation is in complete shambles yet you want more burning and destruction. Shameful, really. Your end of life situation will be quite miserable given the entire support structure is dead. You deserve to be thrown out to die in the street. Cockroaches, every last MAGAT.

How dare you? Doesn't this pass for treason in MAGATworld?

Actually @12:05 at the end of four years of the Biden administration, people will ask "Who the hell was this Hawley guy?".

No survivors of the Trumptanic at all.

In a month Hawley will look like a complete idiot and fool. Today, there has not been 1 item of proof that the election was corrupt. Courts said none of the suggestions were real.

Why does anyone care about what Brennan has to say? He's been on the wrong side of everything.