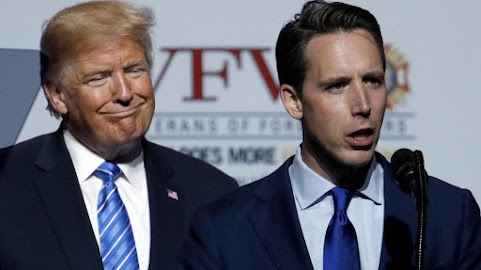 Missouri Senator Josh Hawley has been at the forefront of support for Prez Trump and he has emerged as the NEXTGEN MAGA leader.

AWESOME TKC readers jumped behind the paywall just to grab a screen cap for posterity. 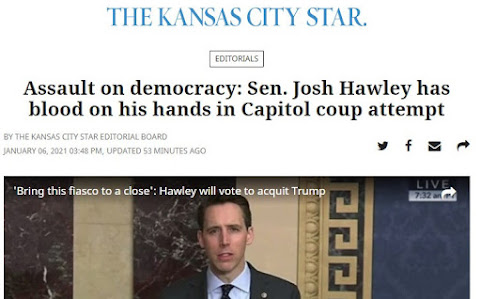 Here's the money line quote that starts the polemic . . .

"No one other than President Donald Trump himself is more responsible for Wednesday’s coup attempt at the U.S. Capitol than one Joshua David Hawley, the 41-year-old junior senator from Missouri, who put out a fundraising appeal while the siege was underway.

"This, Sen. Hawley, is what law-breaking and destruction look like. This is what mobs do. This is not a protest, but a riot. One woman was shot and has died, The Washington Post reported, while lawmakers were sheltering in place.

"No longer can it be asked, as George Will did recently of Hawley, “Has there ever been such a high ratio of ambition to accomplishment?” Hawley’s actions in the last week had such impact that he deserves an impressive share of the blame for the blood that’s been shed."

Over time I've found that taking TKC out of the story in any meaningful way but my snarky, clever and adorable goodness has made this blog better and allowed me to have a lot more fun sharing the news stories I find most interesting . . . Also, it helps readers to understand that I'm just another powerless pleb . . . Very much like the average scumbag TKC reader.

Accordingly, these fighting words from the newspaper aren't editorial journalism -- They're a dangerous provocation amid uncertain times. They don't make me laugh and they might reveal a publication without a perspective on the future.

It's also worth noting that tonight Senator Josh Hawley is being torn apart by progressive chat show hosts across all networks.

Woman shot at US Capitol has died

A woman shot in the chest by law enforcement inside the U.S. Capitol Wednesday when Trump supporters stormed the complex has died, NBC reported, citing multiple law enforcement officials.

Messenger: Hawley sets the constitution on fire, and chaos ensues

If you thought a rebuke from his mentor was going to sway U.S. Sen. Josh Hawley, you haven't been paying attention. On Wednesday, in a desperate attempt to lick the boots of his master, President Donald Trump, Hawley had planned to object to the certification of the election in which Americans overwhelmingly chose Joe Biden as the next president and Kamala Harris as the next vice president.

Sen. (R-Mo.) said that "the violence must end" at the U.S. Capitol on Wednesday in a statement that only briefly alluded to his own push to overturn the results of the 2020 presidential election. "Thank you to the brave law enforcement officials who have put their lives on the line," Hawley said in the statement.

You know it's weird. The Star actually stands to benefit from some of Hawley's proposed limits on social media.

Hey Tk, I read this blog way more than the star. They aren't a newspaper, they're a not even a tip sheet. Sad.

I stopped subscribing to the star 7 years ago.

^^and yet he has and is now forever branded as a treasonous cancer who wants tho overthrow the government. He will be primaried and lose when he is up for re-election. Weird.

^^^ Nope. He'll hold the office of senator for as long as he wants and he'll probably get a vote for President.

^^^^Nope. He and his fellow traitors will be impeached and removed.

Funny how the Star blames Hawley and Trump for this, yet was utterly silent when the pacific northwest was on fire for weeks while entire city blocks were destroyed.

I'm still waiting for that apology section how they STFU about it.

Not seeing that is definely NOT weird, it's predictable.

^^^ Nopers. Just watch. Senator Hawley will probably get his own Fox news show and he'll be one of the most powerful members of the senate.

ASSAULT ON JOURNALISTIC DECENCY: KC Star Editorial Board Has Blood On Its Hands From Successful Suicide Attempt

No one other than this editorial board and their bankrupt McClatchy parent are more responsible for the dearth of credible news coverage in Kansas City. That they habitually ignored all tenets of responsible journalism and substituted their biased political propaganda in support of left-wing Democratic Socialists stands as a stark abomination to their stated mission.

In March 2017, the public was invited to the KC Plaza Library for an introduction to the newly revamped editorial board under the helm of Colleen McCain Nelson.
Sound Off: The Kansas City Star's New Editorial Board
Colleen McCain Nelson, Derek Donovan, Dave Helling, Melinda Henneberger, Steve Kraske, Lee Judge, Mary Sanchez

Nelson, fresh into town following her work for The Wall Street Journal covering Team Obama and the Hillary Clinton campaign, would leave it up to WikiLeaks to reveal her attendance at "spirit-cooking" media dinners with John Podesta. Nelson publicly vowed to "provide readers with a constructive editorial voice that is intellectually consistent but not partisan."
https://www.kansascity.com/news/business/article97435592.html
https://www.kansascity.com/news/local/article114721468.html/video-embed

Of the 7 members listed above, as of March 2017, how many remain with The KC Star?
Nelson herself is flying the coop, with a just announced move to The Sacramento Bee and liberal California.
Steve Kraske left (pushed out) a long time ago, and now confines his liberal dogma to KCUR and UMKC.
Lee Judge retired from The Star, having served as a temporary placeholder, drawing comical inspiration from the board's antics.
Mary Sanchez was forced out after refusing blind allegiance to the cult of Nelson.
That leaves only 3 of the 7, and it's been less than 4 years. Nelson's tenure has been a wrecking ball of lies, obfuscations, and outright purposeful political propaganda. That she exits The KC Star Editorial Board as a privileged white woman with a disastrous record, is testament to the sustaining power of "Karens" who self-proclaim their inherent entitlement and importance.

This journalistic suicide, Kansas City, is what happens when politically-liberal, non-KCMO resident, suburban whites go unchecked in monopolizing an urban newspaper's editorial content. So modest, Ms. Nelson, failing to note your key role in perpetuating one of the most breathtakingly rapid death spirals in modern American history. The community lost something precious in 2020, with the bankruptcy of The Star's McClatchy parent, but Nelson is now off to Sacramento (just NE of San Francisco) to rejoin her bicoastal elitist crowd worshiping their Liberal Deities of Biden, Harris, Feinstein, Pelosi, and Newsom. How long before California declares bankruptcy? Start the countdown.

^^^^Nope. Even Fox News was appalled, and it takes a lot for them to be appalled.

How do you impeach a senator?
Since “progressives “ passed the 17th amendment just how do you remove him?

Hawley is a big pussy, he should’ve been in the trenches with the MAGA piss boys.

Hawley can't get involved in the riots he incites, what with Trump's bonespurs and all. Carrying out riots is for losers and suckers.


Hawley has no blood on his hands. the people who have blood on their hands are ANTIFA and BLM brought to us by the democratic party. Barack Obama has killed more people by drone than any person in US history.

Barack Obama is behind the voter fraud together with the Italian defense contractor MI6 CIA and Germany. The voting data was transferred from the US to Germany to Italy and back here again. When in Italy the data was changed. Obama is behind this. He was taught by the best and that is Muslim extremists.

^^^You may now return to your regularly scheduled tin foil hat program. Give Hugo, Fidel, and the rest of the dead gang our regards.

I bet Hawley was among the first to run for cover from the mob Trump incited.

Also bet he missed the Constitutional law class at Yale- at least the part where State’s rights was the topic. He is a hypocrite of the highest order. Soon to be discarded on the trash heap of history

Hawley is a malignant stain that is a disgrace to Missouri and the nation. What kind of horrible Senator stands lockstep with seditionists who wanted to storm the capital?

Funny how none of the previous 21 commenters said anything about the 2016 election that when the electoral votes were presented in the House and Senate there were objections to some of the votes and not one of you condemned those who chose to raise those objections but you do these. Shows that your hatred of the KC Star pales in comparison to the hatred you have for Trump. Fakers...including Weird person.

How can anyone not hate Trump after what he ordered his folowers to do today?
It is hard to imagine a more UnAmerican act that to order a mob to attack the Capitol of the County.

The star hates its readers. Will not give them my money.

bad week for Hawley. his stance on the electoral challenge. then that trump georgia call. and now this awful s scene and a woman dead.
but the worst of all is with the georgia senate races settled now, hawley isn't the youngest senator any more.

what was he thinking?


well, the woman the DC police gunned was White. a protesting Repub...and a vet..so..who cares?

Now,if she had been black..yet ANOTHER opportunity for Democrap looters to plunder area merchants..

Don't tell me that Luis Doo-Doo-Good didn't write that screed because he did.

If you storm the US Capital building you just might die! 4 died today - 1 shot, 3 of medical conditions not treated quickly due to crowds, confusions and lack of safety to allow EMTs into the area. Lay there and die, protesters!

You have been ployed by Trump. he knows he lost. You dont.

Looks like it was a mostly peaceful protest to me. Ever heard that before?

Hanley never once called for violence of any kind. To even publish an opinion like this ought to be actionable.

"How can anyone not hate Trump after what he ordered his followers to do today?"

Quote precisely what Trump "ordered" his followers to do.

I cancelled the Star today. Took a bit of work to do it. Their subscription agents are not local. In a foreign country. She asked me why and I said because "the Star sucks." She didn't understand that jargon. They are dead to me.

Commie newspaper should see a huge resurgence in a Commie Country.
Piece of liberal ass wipe would be giving it a compliment.
I subscribed for 25+ years and one of the best days of my life. was cancelling my subscription.
I can't wait to see them fold!